The palabra within the off-road community is that reggaeton star Karol G has brought some new fans and racers into off-roadin’ culture. “I think it’s awesome that more women are getting involved in off-roading,” said Yolie Stover, who has covered the off-road racing scene since the ’90s, when Karol G was birthed in Columbia as Carolina Giraldo Navarro. “‘LOCATION’ is a cool video with off-road vehicles and bikes. The beginning is awesome, when all the cars and bikes take off.”

Reggaeton is a fusion of Spanish rap, hip-hop, Caribbean, and Latin music, primarily based on the dembow rhythm, that originated in Puerto Rico dance halls in the early 1990s and spread throughout the island and into the U.S. mainland via bootleg cassettes.

The “LOCATION” video — in which Karol G performed with then-fiance and Latin-trap rapper Anuel AA and J Balvin, a Colombian reggaeton singer — launched a couple of days before Valentine’s Day. As this article goes to print, the trappy-twangy joint’s YouTube video has garnered 242 million views. Karol G is depicted leading a pack of off-roaders in a lifted red Volkswagen Baja Bug. She sings while gripping a wooden steering wheel in a racing seat surrounded by a roll cage. “Hoy es sábado / Indica las coordenadas, que hoy nos vamo-oh-oh-oh-oh,” runs the opening verse, which translates roughly to “Today is Saturday / Indicate the coordinates, that today we are going-oh-oh-oh-oh.” 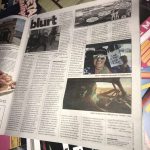 The original story ran in the print edition of the San Diego Reader on June 17, 2021.

“We were able to fuse reggaeton/hip-hop/country influences into an amazing song and video filled with energy and rodeo vibes!” said the 2018 Latin Grammy Award winner (for Best New Artist) in an Entertainment Tonight interview. The University of Antioquia alumna turned urbano-songstress sports a blue hairdo in the video, and rocks a black bandanna or a red sequined jacket as tops. In some parts, she wears a cowgirl hat and a thong bikini and dances provocatively with her backup dancers.

“There’s lots of sex and alcohol talk, and it’s not suitable for kids,” said Stover, who has raced in a Baja Bug similar to the one in the video, “but I like the song.”

As Stover and I spoke, she was prepping in her Alpine residence for coverage of the Baja 500, an off-road, single-loop race that starts and ends in Ensenada on June 10-13. “They would’ve played Karol G’s songs in the contingencies of the race,” she noted, “but there are no contingencies this year, because of Covid-19.” Pre-pandemic, thousands would gather at the contingencies for both the Baja 500 and Baja 1000 to view the racers and their vehicles prior to the event, and a DJ would play music for the crowd. “But I’m going to the Baja Beach Fest, and she’s going to be there.”