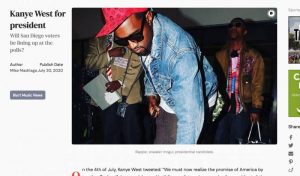 The original story was featured in the print edition of San Diego Reader on July 30, 2020.

On the 4th of July, Kanye West tweeted: “We must now realize the promise of America by trusting God, unifying our vision and building our future. I am running for president of the United States! #2020VISION.”

I took to my social media to see if the 43-year-old rapper turned entrepreneur would have San Diego voters lining up at the polls in support of “Ye.” For West to be on our California presidential ballot as an independent, he has until August 7 to retrieve 196,964 signatures, which is one percent of our registered voters according to Ballotpedia.org.

Unlike West’s massive airtime and internet streams, which copped him an unprecedented 21 Grammy awards, my reach out yielded the equivalent of radio silence. So I jumped online to peep the rapper’s political movements, and listened to his CDs, including Late Registration (2005), Graduation (2007), My Beautiful Dark Twisted Fantasy (2010), Yeezus (2013), and his 2019 Jesus Is King, a Christian rap-infused, blue-colored CD packaged in a jewel case sans cover art, reminiscent of a test-press CD. 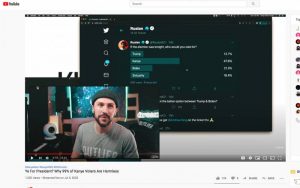 Ruslan KD tweeted a poll and captioned it “if the election was tonight, who would you vote for?”

On July 5, SoCal rapper Ruslan KD tweeted a poll and captioned it “if the election was tonight, who would you vote for?”; of the 550 votes, with nine hours left, the “Famous” rapper was leading at 47.6 percent over Trump’s 12.7 percent, Biden’s 21.3 percent, with the remainder going to “others.”

On July 16, the Yeezy sneaker creator qualified to appear on the November 3 Oklahoma presidential ballot, which was the first state where he met the requirements prior to the deadline. Kanye registered himself as a “BDY” (Birthday Party) independent candidate, and he paid the $35,000 filing fee, according to Misha Mohr, an Oklahoma Board of Elections spokeswoman.

“Cha-ching,” chimed my iPhone. Danielle, a local hip-hop head and 26 year-old college student, hit me via direct message. “I think Kanye probably wanted to test the waters,” she typed. “Kanye has expressed that he is a newborn Christian and he sees Trump aligning himself with those values. I think he supports him because he agrees with what Trump stands for. Being the light of the world is what we’re called to do as Christians, so Kanye is going to stand out in this dark world with the decisions he has to make regarding his faith, and his relationship with Jesus.” 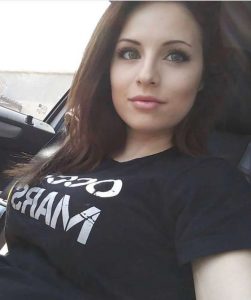 Danielle: “Kanye has expressed that he is a newborn Christian and he sees Trump aligning himself with those values.”

On July 19, at West’s first presidential rally in Charleston, South Carolina, West spoke on abortion, gun control, addiction, and abolitionist Harriet Tubman. But whereas his 2005 album Late Registration garnered him a Grammy award for Best Rap Album, his late registration and inability to collect 10,000 signatures in the state by the July 20 deadline, disqualified the rapper’s chance to run for POTUS in South Carolina.

“Cha-ching” chimed my phone again. In 2018, Caesar Morales, a local photographer and hip-hop purveyor, photographed Trump when he visited downtown. “It’s simple, Kanye comes from the bottom up, allowing him to directly connect to the pulse of the streets and the upscale communities. His business prowess allowed him to profit a unique brand, Yeezy, a mega brand he developed with Adidas. I think Kanye serves two purposes: he understands what the government structurally depends on, and that’s money, and he connects with the voters through his branding and reach through his fashion products.”

“And since Trump has made the best economy in America’s history for its workers,” Danielle added, “the hip-hop industry benefits due to the increased purchasing power of the American people.”