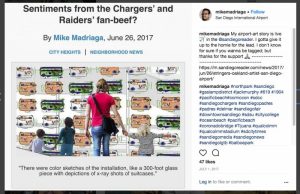 Published in the San Diego Reader magazine on June 26, 2017.

“An Oakland-based artist was commissioned to create a massive piece for the San Diego International Airport,” Joshua Alcala said. “Shouldn’t you give it to San Diego artists?”

On June 16 and 17, The Aja Project hosted a meeting at their location at 4089 Fairmount Ave. in City Heights. Aja, a photography-based educational program, collaborated with the airport and Walter Hood (an Oakland artist) — and opened up their doors to the public “to be a part of public art.”

Alcala, 39, was one of about ten people who visited on Friday. “They sat at a round table, and each person showed what they would bring in a suitcase to remind oneself of San Diego.”

Alcala noted that one native brought in a photo of an intersection, and another brought a vase, but the organizers needed more variety; so they instructed the locals to bring in more stuff the following day.

“What is a memorable personal object that reminds you of your home … your neighborhood … or brings you comfort,” stated the flier for the meeting that weekend.

Alcala explained the design selected. “There were color sketches of the installation, like a 300-foot glass piece with depictions of x-ray shots of suitcases (multiple side profiles). This will be displayed at the arrivals section of the international side of our airport.”

Alcala is a graffiti artist that has done large pieces in the past. His day job is youth and adult delinquency prevention; his office is located in City Heights.

Alcala added that many other local artists share his sentiments, while some artists do not, completely. 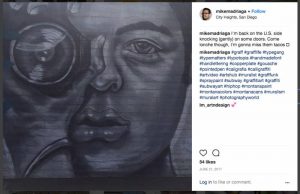 Aja, a photography-based educational program, collaborated with the airport and Walter Hood (the Oakland artist) — and opened up their doors to the public “to be a part of public art.”

“The cookie is hard to swallow, but get a glass of milk,” said Max Mosses. “I would love to be in that position.”

Mosses is an artist that teaches graffiti classes out of the Art Academy of San Diego on 3784 30th Street. “I would love $300,000,” he said regarding the alleged amount that was commissioned to Hood, “you can feel salty all you want – but you have to understand that there are a lot of reasons to select him (Walter Hood).”

“But that is where there is an issue,” Alcala continued, “we want to know the process on how to become selected in future projects. I spoke to the airport and Aja people, and they said that we (San Diego-based artists) had an equal chance to place our commission bids, but when and where was this offered?”

Another artist said that some of these sentiments are derived from the Chargers’ and Raiders’ fan-beef. “Imagine if this was flipped and a 1904 (San Diego) artist was commissioned to do the Oakland joint (Oakland International Airport) — the 510 (area code) wouldn’t be so ‘with it’ either.”

Mosses said that he wasn’t able to go to the Aja meeting but has met with them in the past. Last Saturday, he was in Rosarito organizing an event called “BBoy BBQ,” where participants painted rooftop walls.

“I don’t want to be the voice of San Diego, this is just my sole opinion,” Mosses said. “I have done art in different cities and countries, and when Yonkers, New York (his hometown) had a large mural piece done, I wasn’t invited. That was wack. I can empathize in that perspective, [but] people have the right to choose who they contract.”

“Walter Hood is the creative director and founder of Hood Design Studio in Oakland, CA,” states his website. “He is also a professor at the University of California, Berkeley.”

“You figure that they would want to help out our local artists and look out for our own art base,” Alcala closed out.