Homeless at the Comic Con 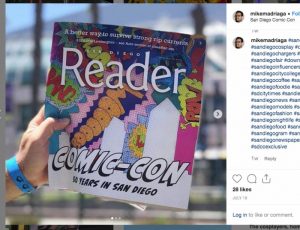 The original story was featured in the print edition of the San Diego Reader on July 18, 2019.

Every year about this time, Vinnie Wood wonders if he’ll be able to attend Comic-Con International: San Diego. He’s been attending since 1980.

“I never met another homeless comic book fan,” he said on June 10, “until I met one of my best friends, [Peter S.], who took me in his home for a while. He’s a fellow comic book and sci-fi fan — and was also once homeless.”

Wood lives out of his car, storage unit, and his buddies’ homes. He’s been off-and-on homeless since 2000, which is about the same time that he noticed Comic-Con starting to become a pop culture phenomenon that now draws over 130,000 fans from all over the world.

“Around the early 2000s,” Wood recalls, “it seemed like it commercialized, and big studios started coming in and taking up room from small vendors. And dramatic price increases, too.”

Of late, it’s become increasingly difficult for professionals (comic book writers and artists), media, talent, volunteers, cosplayers, and lifelong Comic-Con fanatics such as Wood to obtain passes to enter the four-to-five day convention that spills out from the 2.6 million-square-foot San Diego Convention Center.

“It’s so hard to buy passes online,” Wood said. “I tried at least six times with no luck. So basically, now you have to know somebody like a dealer on the inside to get in.”

William Messner-Loebs had VIP access to Comic-Con in 2017 when he co-won the Bill Finger Award with the late Jack Kirby for excellence in comic book writing. 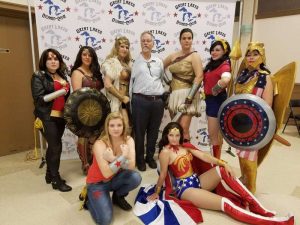 Like Wood, Messner-Loebs and his wife Nadine are homeless — but in Michigan.

I spoke to Messner-Loebs on the phone on June 19. He was test-driving his Chrysler, which had been in the shop for three weeks. He was hoping it would last throughout 2019, because he’s already used up his yearly tow allotment with AAA.

“We’re not living in our car [anymore],” he said, “we live in the one hotel where the… social services organization helps us. It’s the only place that exists where the ‘down and out’ can go.”

“Now we have air conditioning,” he said, “which is good for right now, because its getting into the 90s here in Michigan. And when it gets cold, we have heat.”

To sustain himself and his wife, Messner-Loebs currently works at Panera Bread as a delivery driver and on the side, he makes guest appearances at comic book shows to talk about and sign the old comic books that he wrote, penciled, or inked — including Wonder Woman, The Flash, Thor, Batman, and The Maxx. 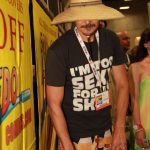 Peter has been a Comic-Con vendor since the early 90s.

Back in San Diego, Wood and Peter buy and sell collectibles online when they can locate a wifi signal. In 2015, I purchased Spider-Man and Venom basketball jerseys from the pair, after I saw their eBay auctions.

Peter sold the same style jerseys that I purchased for $12 at the Con, where he’s been a vendor since the early 1990s. “We sold them for $25 at the show,” Peter recalled.

I wore the Spidey jersey to last year’s Con.

“So you’re Wood’s connect to get inside the comic convention?” I asked.

“Yeah, Vinnie [Wood] helps us inside the Con by watching our stuff; he gets us food and drinks; and he helps to set up and break down our booth display,” Peter explained 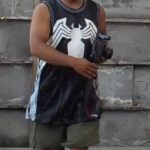 Mike Madriaga bought this Venom jersey from Peter in 2015.

Peter compensates Wood’s labor with a bona fide Comic-Con International dealer badge. A dealer badge can sell on the black market for $1000, because it grants 1-2 hours of access inside the show before the general public enters, and for another hour after the show shuts down for the night. You can wander about the venue, shop and take selfies — without anybody in the way.

“I once saw Rosario Dawson (the actress who plays Claire Temple on the Marvel Comics/Netflix collabs) in the exhibition hall,” Wood said, “and the cast for Breaking Bad and Spartacus in Hall H.”

The Con reminds Wood of his “childhood, which was good because my parents were supportive of my collecting and were happy to see me reading all the time,” he said.

“I paid about $2 a book,” Peter recalled, “except for the first appearance of The Punisher. For that, I paid $40.”

Around the same time, Wood had other key issue comic books that he didn’t sell to Peter.

“I had some high-grade Golden Age and Silver Age, including a grade 7.5 Superman #2, and some Marvels, including a Spider-Man #1, Amazing Fantasy #15, Journey Into Mystery #83 — all in high grade, which is the only grade I collect. Grade 7.0 minimum.”

(A grade 10 specimen comic book — which is extremely rare — is flawless inside and out.)

“Do you still have those issues?” I asked.

“They were stolen when my house was broken into,” he said, “by someone who knew that I had them.”

“His collection, which was in a suitcase, was stolen from his old house on Glading Drive,” Peter recalled, “not too far from here” (in south San Diego). 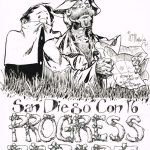 This was about the same time that Messner-Loebs wrote and illustrated Journey: The Adventures of Wolverine MacAlistaire. In 1985 or 1986, he and Nadine flew out to the San Diego to attend the Comic-Con for his nomination for the Russ Manning Most Promising Newcomer Award; he did not win. In 1987, the couple flew back to the Con for another nomination, and this time Messner-Loebs won the Inkpot Award for contributions to comics, animation, science fiction, and popular culture.

“For two years, I was floated by DC Comics to fly out to San Diego, because I was writing for Wonder Woman,” Messner-Loebs said. “I was making good money between writing five books and then The Maxx.… At those times you were still in touch, with the real publishers and editors and the artists and writers, because we were in their booths.”

Peter continued, “(Messner-Loebs) only has one arm, which didn’t stop him from being a legendary storyteller and artist — he’s a real superhero to all of us.”

Like Wood, Messner-Loebs and his wife Nadine became homeless right around the turn of the century.

“The bottom fell out of the comic book industry in ‘98-’99,” Messner-Loebs said.

Peter remembered why. “The comic prices were too high for the norm — $2.95 was expensive for a 1990s comic book, especially when we were used to paying $1.25 – $1.50 per comic, and then after 1994, they glamorized comic books with too much shiny stuff like foil covers and prism covers, and those gimmicky covers were $4.95. 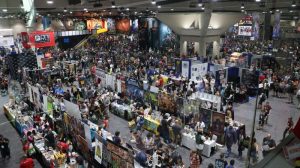 “Around the early 2000s,” Wood recalls, “it seemed like it commercialized, and big studios started coming in and taking up room from small vendors.

“What really hurt the comic book industry was the new-at-the-time [method of] browsing and reading stuff on the worldwide web — and it was free. But they rebirthed DC and Marvel in 2002-2003 and started everything from scratch again.”

Throughout the 2000s, Messner-Loebs and Nadine did not return to the annual San Diego comic convention.

“Once we started getting into financial difficulties,” he said, “going across the country was one of the first things we dropped when we ran out of money. My wife had open heart surgery a couple of years ago and cataract surgery, plus therapy on her knees so she can continue to walk at all,” he says in part on his GoFundMe campaign. “She is in constant pain. Past, present, and future medical bills loom pretty large. I’ve been working as a delivery person for Panera Bread and as a fill-in janitor for my local church plus doing sketches and covers at local conventions. Those things, plus Social Security, kept our heads above water.”

In 2017, the couple’s homeless situation didn’t change for the better — although Messner-Loebs’ recognition did when he was listed in the credits for the 2017 Wonder Woman movie.

“Nadine was hitting me in the side,” he said. “She had sunk her nails into my arm and was jumping up and down screaming, ‘Look there, look there. It’s you on the screen.’”

The month after the Wonder Woman movie hit the silver screen, Messner-Loebs and Nadine were flown out to the Con for his Bill Finger Award.

“I loved getting the award,” he said, “and I loved that my co-award winner was Jack Kirby, and I got to meet everybody there.” 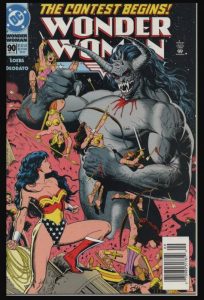 “I would never go to the San Diego Comic-Con again unless I was being paid to do it,” he responded. “I was horrified at how difficult it was to go to the Comic-Con. It was completely packed. You were traveling at about two miles an hour anywhere you were. From our hotel, which was two blocks away, getting to the convention center took about an hour. I know this makes me sound like an old fogey, but I go to busy conventions around here (in the Midwest) — and this was a totally different animal.

“And the networking possibilities?” I asked.

“They no longer have any real publishers at San Diego,” he responded, “certainly no one from Marvel or DC. They are all publicity people who can’t answer any of those [editorial] questions. They were all PR people, and there was nobody from editorial anywhere. I was hoping to get contacts, and I was hoping that I would talk to people; but it was impossible to do.”

“What’s happening next?” I asked.

“I’m assisting [with comic book writer Amy Chu and Edu Menna] with a KISS comic book,” he said. “It’s a celebration of this long final tour that they are doing, using the medium of a science fiction background. We have a KISS fan who has been thrown into the mission of recovering a mystical sword that KISS, the band, has picked up sort of inadvertently.” 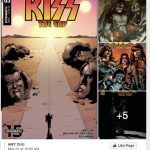 Peter and Wood remember seeing KISS’s Gene Simmons (sans makeup) roaming the Con’s halls. For July, Peter is seeking vintage KISS toys and the Wonder Woman #90 issue that Messner-Loebs wrote — the one with the first appearance of the Artemis character — to sell at his booth. “The [Wonder Woman #90] comics were like $20-$30 last year, and now they are $100 apiece,” Peter said.

“I’ve heard through the grapevine that there’s a possibility somewhere down the line, if they do a second Wonder Woman movie,” Messner-Loebs said, “that the movie might have Artemis in it.”