“The International CES (Consumer Electronics Show) is the world’s gathering place for all who thrive on the business of consumer technologies,” according to their website. “Held in Las Vegas every year, it has served as the proving ground for innovators and breakthrough technologies for more than 40 years—the global stage where next-generation innovations are introduced to the marketplace.”

During the first week of January, I was one of 6575 media attendees to trek the 2.06 million sq./ft. of display space at the Las Vegas Convention Center and its surroundings.

Phone and tablet accessories were enormous hits at this show — especially the headphones. 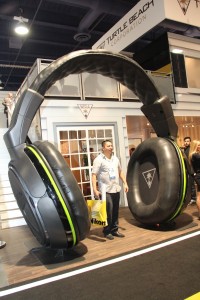 Headphones were originally developed in 1910 by Nathaniel Baldwin. He originally made them by hand in his kitchen and sold them to the United States Navy. Baldwin probably would’ve never imagined that in a hundred years, his invention would be an important accessory for children too.

Hundreds of companies were present at the show pushing their new line of headphones.

Body Glove, the inventors of the wetsuit in 1953, showcased their whole line of cellphone accessories which also included their water resistant headphones.  Tatiana Weston-Webb, a Women Surf Champion, was at the booth signing autographs and giving out samples of the Earglove noise isolation earbuds.

50 Cent, the Grammy award winning rap-musician, was also promoting his own line of SMS Audio headphones.  It’s definitely on the higher end of the ear-candy spectrum — with some rockin’ Swarovski crystals and retailing for more than the smartphones that they plug into. While chatting it up with the crowd, 50 Cent was bending and twisting his BIOSPORT headphones to demonstrate how durable they were. 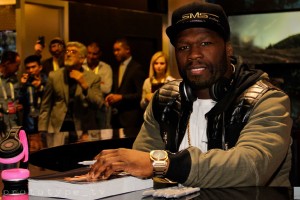 “That’s a long-ass line,” said one girl passing by. Her boyfriend wanted to get 50’s autograph.

If Rappers don’t excite you, some booths had attractive spoke-models that gave away promotional baggies filled with swag. Mine came with a couple of pens, stickers and a t-shirt.

Turtle Beach had a 12-foot pair of headphones where you could stand inside and take photos.

Another draw here were DJs and artists that were performing live.

The iWorld booth had the best of both worlds. DJ Aimie Rose, who doubles as a model, was here spinning Dub-Step music on her turntables.

DJ Tiesto was here too. He partnered in with Audiofly to help create the “Clublife” headphone products.

I tested these out myself. The set has detailed sound and a wide frequency response, which mimic the experience of sitting in front of Tiesto’s live performances — whether it be in an arena or a nightclub. “Grab a pair,” said one of the spokesmodels at the booth. I obliged and stuffed ’em in my swag-bag.

“These [headphones] are my best sellers,” said Javier, a small business owner from Mexico. He was waiting to take a photo with Tiesto and sign an exclusive so he could be a distributor in his hometown.

Like Javier, most of the visitors had businesses back home. And with smartphones transcending almost all generations, it only made sense why there were so many headphone booths present. 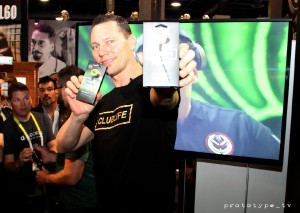 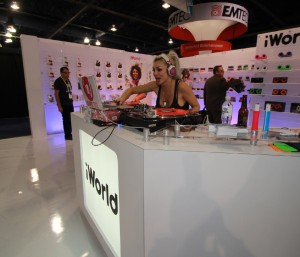