In search of the green flash 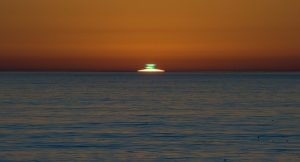 Mannerino has caught about 12 green flashes in the last two years.

Point Loma resident Chris Mannerino direct-messaged me on Instagram at 4 pm on October 5.

“Do you want to shoot [the green flash] with me this evening at Sunset Cliffs at Froude Street, at around 5:45 pm?”

We’ve been messaging back and forth since the previous week about capturing the elusive green flash occurrence during sunset: he’s caught about 12 in the last two years since he started photographing.

I parked alongside Sunset Cliffs Boulevard on the opposite side of the parking area in front of a house. I saw Mannerino posted atop the cliffs overlooking the big rock where the mermaid mannequin sat in May. I left my gear by his bag of lenses next to the guardrail by where walkers, joggers and vehicles passed us.

“Yeah, don’t worry, nothing gets stolen over here,” he laughed.

“That lens makes your camera look like a bazooka, bro,” I said. It measures about 17″ long with the hood (plastic cylindrical cover over the lens).

Mannerino was doing some test shots from our elevated vantage point. According to his phone app, The Photographer’s Ephemeris, which “helps you plan outdoor photography in natural light [and] see how the light will fall on the land, day or night, for any location on earth” — we had about 30 minutes before sunset. 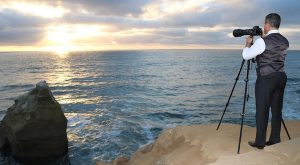 Chris Mannerino: “You have to constantly focus on the sun because it’s constantly changing.”

“What’s causing the green flash is the lights refracting as the sun is setting: it goes from orange to yellow to red and that’s when it happens — it’s a green flash for one maybe two seconds,” Mannerino said. “I use my viewfinder because staring at the sun is not good. But you can see it with the naked eye.”

When Mannerino and I were coordinating the week before, I dropped off my camera lens at George’s Camera for repair.

“I’ve only seen the green flash a couple of times in the 50 times that I’ve looked for it,” said Mark Murphy, the camera shop’s sales rep. “I haven’t heard of someone bringing up that topic for 20 years. In 1984 there used to be a bar/restaurant at Pacific Beach called The Green Flash owned by an Asian guy. It was the place that everyone went to and they had the outside deck where you could sit and eat dinner as the sun went down. You would see people set up with the big long lens to take that shot.”

“But it was way harder to get that shot with film,” I commented. “You had what: 24 to 36 shots. I’ve got lots of respect for you film photographers.”

“From what I remember,” Murphy continued, “it seemed like it happened not on the sunniest of days like usually there’s a cloud layer then it opens up and then there’s the horizon.”

“Sometimes when there are Santa Ana winds and there’s a lot of particulate matter in the air,” Mannerino said, “that helps accentuates the green flash — but that isn’t what causes it.

“The conditions gotta be right: atmospheric conditions are everything. Today might not be a good day because of the big clouds. You want a clear day; the clearer the better.”

I pulled out my iPhone and had my wife take behind-the-scene shots of us; she and our kids had just finished watching cliff divers about 200 feet north of us by the parking lot. 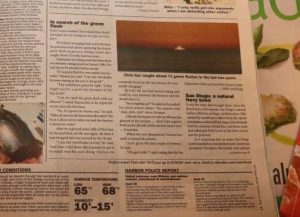 The original story was featured in the print edition of the San Diego Reader on October 25, 2018.

“Can we catch the green flash with my iPhone?” I asked Mannerino as he wiped the ocean-mist off of his lens.

“No, it’s gonna be blown out,” he explained. “Mike, do you see the boat out in the water?”

“I can barely see it; it looks like a small dot,” I responded. Then when I looked through the camera, the boat appeared inches away in the viewfinder.

“The boat is about seven miles out and the horizon is about ten miles,” Mannerino said.

After he captured stills of the boat, he focused back on the sun again and by now it had dropped and was covered by the clouds.

“I use the viewfinder screen,” he said, “and then I dial down the exposure to get it to match what the sun’s doing. You have to constantly manually focus on the sun because it’s constantly changing.”

To the left of us down below, some surfers were catching 3-4 foot waves, and there were other photographers with tripods and big lenses within eyeshot from our spot.

“About two years ago I got tired of photographers shooting my real estate listings because I didn’t agree with some of the lighting and composition,” he said. “So I learned to shoot myself.”

Mannerino is a real estate consultant for Sotheby’s International Realty. His Instagram and Facebook feeds are packed with sunsets and beach lifestyle shots. I asked: “Did you learn to photograph from school or YouTube tutorials?”

“It was mostly going out and shooting and getting used to my camera and knowing the settings at manual mode,” he said. “For me, it’s been about trial and error, like tens of thousands of pictures and I ask a lot of questions from other photographers.”

By now, it was 6:30 and the sun started setting and could be seen between the horizon and the clouds above it. 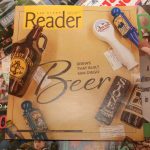 “See it rippling up (by the rounded left and right sides of the sun),” he said as he pushed his wired remote clicker. The camera then went “click, click, click” about 20 times and the screen went blank. “As the ripples start to go towards the top; that’s when I’ll kinda shotgun it.”

I filmed the sequences with my iPhone, glanced at the horizon, then I saw a green flash on the left side of the sun but was not sure. The green flash was fast. When the sun disappeared Mannerino and I reviewed the photos. “Let’s go to the last couple of frames,” he said.

“We got a little,” I said and noticed the top left of the sun had a hint of a green tinge. “Yah we got a little,” he agreed, “as it goes down, the focus goes out really quick.

“Oftentimes, not until I get home and get into post-production with Lightroom, I’ll get the slider and kinda move the blue a little and that’ll make the green pop. The reds are so so vibrant and when you take a picture of it, it doesn’t look the same, so [almost] all professional photographers go either into Lightroom or Photoshop.”