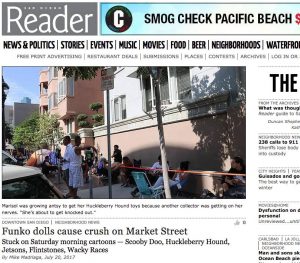 Ricky Franco and his two sons camped out on a downtown sidewalk for the last 31 hours – they had 18 more hours left.

Franco, 40, and his two sons, were the first in line at the Funko Pop Up Shop located at 448 West Market Street. At around 9 a.m. on Tuesday (July 18), they set up their lawn chairs and posted up – for a good reason.

A couple of blocks away, at the Comic-Con International: San Diego, many were also lining up by Hall H (48 hours prior to opening on July 20). Funko had a booth there too.

At the pop-up-shop location, the Funko-fans had foldup chairs, blow-up beds, sleeping bags, pillows, blankets, tents, coolers, and electronic devices to help ease the overnight wait. The line started a few feet away from the Market and Columbia street corner (where a life size Mystery Machine was parked), to around the corner of West G Street, and then down State Street — almost a full city block.

“My wife thinks I’m crazy,” Franco said. His son looked back and said “He is crazy.”

Franco, an Eastlake resident, has accumulated about a hundred Funko dolls since he started collecting a year ago. They are vinyl toys that measure 5″-6″ tall, and many are miniatures of a pop-culture icons.

“A lot of stuff at this store is from Saturday morning cartoons,” said Mark Robben, the director of marketing at Funko, “[including] Scooby Doo, Huckleberry Hound, [and] kinda old-school Hanna Barbera stuff (Jetsons, Flintstones, Wacky Races). They will be pretty limited and harder to get for your average collector.”

The store had characters from Looney Tunes cartoons, including Bugs Bunny, Daffy Duck, Marvin the Martian, Duck Dodgers, and K-9.

“It takes me back to when I was a little kid watching Saturday morning cartoons when my mom made me lunch or vacuumed the floor,” Franco said, “I love Scooby Doo and Wacky Racers.”

Marisol, 32, from Los Angeles, was about the 15th in line. She was waiting for about 28 hours and was growing antsy to get her Huckleberry Hound toys because another collector (towards the end of the line) was getting on her nerves, “She’s about to get knocked out if she says that again,” Marisol said, “she’s a blonde and walks by us making snide remarks.”

Many of the collectors were tired, and some could be heard snoring inside their tents. Another collector had an issue with one of the residents, because his sleeping bag was supposedly blocking the doorway. One of the employees of a nearby museum, came to the front of the venue and was upset about the trash.

“After 48 hours, it gets kinda hard to maintain,” said one collector, while he waited for his friend to get back “from the potty.” The collectors took turns using the bathrooms across the street at the Grand Hyatt Manchester.

Ashley was upbeat despite sitting on the warm pavement for about 28 hours — she just napped with her friend’s poodle. “I’m going to buy as much Funko as possible,” she said, “it’ll be worth the wait.”

The Funko dolls start at about $15 apiece, and the vehicles at about $25.

“We have some Game of Thrones figures that are going to go pretty quickly, [and] there’s an old-school Nightwing and Deathstroke two-pack that’s pretty limited,” Robben said. “What defines the rarity for a lot of people are the piece-counts, so if we make something that has a 200 or 300 piece-count, that can resell for high dollars; it’s simple supply and demand.”

On July 20, at 10:00 a.m., the collectors were allowed to enter the Market Street pop-up-store. Around the same time, there were 2017 Comic Con Funko exclusives on sale via eBay; a signed Conan O’Brien doll for $750, a chrome Batman for $350, and Rufus Ruffcut & Sawtooth from Wacky Races for $231.

The company was founded in 1998 and their “Funko’s Pop! Vinyl is the number one stylized vinyl collectible on the market, selling millions of figures to collectors around the world,” states their website.