Breakin’ with Olympic prospects @ Kearny Mesa/Old Town
Breakdancing will be an official sport at the 2024 Olympics in Paris, and local b-girls and b-boys have been practicing breakdance maneuvers in hopes of repping Team USA. Throughout the county, breakers are “spontaneously” linking up via “social media,” according to b-girl Melissa Adao, and more formally at the Apex School of Movement and Culture Shock Training Academy. 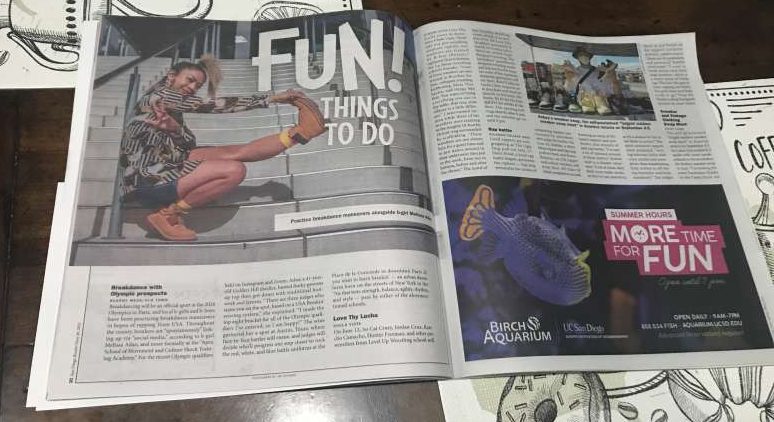 For the recent Olympic qualifiers held on Instagram and Zoom, Adao, a 41-year-old Golden Hill dweller, busted funky grooves up top then got down with traditional footwork and freezes. “There are three judges who score you on the spot, based on a USA Breakin’ scoring system,” she explained. “I made the top eight bracket for all of the Olympic qualifiers I’ve entered, so I am happy!” The wins garnered her a spot at Austin, Texas, where face-to-face battles will ensue, and judges will decide who’ll progress one step closer to rock the red, white, and blue battle uniforms at the Place de le Concorde in downtown Paris. If you want to learn breakin’ — an urban dance form born on the streets of New York in the ‘70s that tests strength, balance, agility, rhythm, and style — pass by either of the aforementioned schools.

Love Thy Lucha @ Chula Vista
On June 12, So Cal Crazy, Jordan Cruz, Rancho Camacho, Hunter Freeman, and other pro wrestlers from Level Up Wrestling school will grapple at the Love Thy Lucha event in downtown Chula Vista. “Don’t take our pro-wrestling students lightly; our students are trained by B-boy (Benny),” explained Norris Jarmon, the La Mesa wrestling school’s founder. “Some of these wrestlers are also trained in Brazilian Jiu-Jitsu, collegiate wrestling, kickboxing, Muay Thai, karate, and things like that. 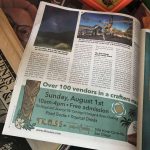 On June 12, pro wrestlers from Level Up Wrestling school will grapple at the Love Thy Lucha event in downtown Chula Vista.

You want to bring everything you can to the table; that way, your offense is a little different.” I interviewed Jarmon while three of his wrestlers were training in the roughly 18-foot by 18-foot ring surrounded by scaffolding. “These wrestlers are not always here for a good time and to just dance around in their underwear; they put in the work, from top to bottom, before and after the shows.” The motif of this Saturday wrestling event, which is co-produced by the Love Thy Neighbor movement, is based on Lucha Libre: Mexican-styled, high-flying pro wrestling. The luchadores’ grandiosely designed wrestling masks and top turnbuckle leaps are some of the signature elements spectators will see here; there’ll also be Lucha Libre-inspired art to purchase and food to munch in between the bouts. It’s $5 for the kids and $15 for adults at the door. The opening bell rings shortly after 6 pm, and the matches go on until 9 pm.

Rap battle @ Rolando/College Area
Local rappers are congregating at the Ugly Dog Pub on July 17. Shots Fired, a local rap battle league, promotes the ciphers — hip-hop vernacular for circles of competing rappers surrounded by onlookers who judge the battles. On June 25, Kahlee, a Mira Mesa rapper and hip-hop podcast host, and KnewBalance, an OB rapper, and school teacher will drop their SD State Of Mind compilation record, featuring an array of SD-based rappers and producers, plus winners of past rap battles. 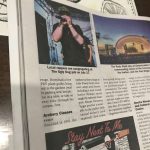 Local rappers are congregating at The Ugly Dog pub on July 17.

“I’ve met a lot of talented emcees at these battles,” Kahlee said in a Reader interview. “A lot of times, they don’t even make music, or they’ve just started to, so it’s a chance for me to see them in action.” The more seasoned rappers come prepared, “writing intricate lyrics with crazy similes and metaphors, then transitioning from written to off-the-top freestyles and back, seamlessly.” The judges cheer or jeer based on the rapper’s wittiness, delivery, cohesiveness, “clever use of vocabulary, and presence,” Kahlee continued. “I want to book artists that have stage presence, which is a major piece of battle rap. This isn’t the spot to come rapping over lyrics. You gotta have your bars ready to go.” Peep the ShotsFiredRap Instagram account for exact times.

Sneaker and Vintage Clothing Swap Meet @ Point Loma
The self-proclaimed “largest outdoor sneaker swap meet” in America returns on September 4-5 for Labor Day weekend. I spoke with some sneakerheads in the area before Kobey’s sneaker swap in June. “I’m looking for some Turdunken Dunks or the Camo Duck Air Max’s to 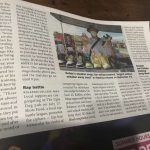 match our ‘Duck Sauce’ song,” NEMY said. (NEMY, a local artist, just released the ‘Duck Sauce’ single he co-rapped with Indian K on the SD State Of Mind compilation album.) “I was what people call a ‘sneakerhead’ before that word existed in the early 2000s,” NEMY continued. And the Meet might have just what he’s looking for. “I have a pair of used Nike Dunk SB High ‘Turdunken’ size 10s for $230,” says Sailboat Lewis.

Lewis, from Mission Valley, has been slinging vintage sneakers since the first Sneaker and Vintage Clothing Swap Meet in 2019 when there were 100 vendors and 7575 shoppers. “Kobey’s has always been my most lucrative show, and since the first time vending there, I have sold at over a dozen other events.” In April, the sneaker and vintage clothing show brought in “250 vendors and 12,226 shoppers,” according to Anthony Pretto, the show’s founder. “We are expecting vendors and shoppers from Arizona, Nevada, New Mexico, Los Angeles, Pennsylvania, Oregon, and Washington.” If you’re considering selling your old kicks or pairs owned by your parents (or their parents) back in the day, Pretto sells 18-foot by 16-foot booth spots for $40. 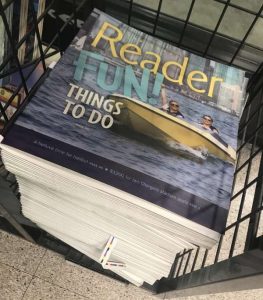 The original story was featured in the print edition of the San Diego Reader on June 16, 2021.

The San Diego Comic Book Show @ Mission Valley
On July 17, there’s a quaint comic book show in town. “Be sure to come at 8 am as an early bird to get the best selection and prices on some of the hottest books in the market,” states the event’s Facebook page. This is the first official local comic book gathering since I covered Comic Fest, which happened about a week before the 2020 statewide shut down. “We comic book fans are tired of shopping online and getting books in the mail,” commented Ray M., a comic book collector, and online dealer. “That experience of opening up a gummy-like bag, pulling out the silver age comic book and backing board, whiffing the aged specimens, inspecting the spine’s binding and creamy inside pages, then negotiating face to face with a dealer, was lost in 2020.” The event page notes that “we will be following local health guidelines and will require all participants (dealers, guests, and attendees) to wear masks. We will be limiting the number of attendees in the dealer room to provide a safe and comfortable environment.” The organizers added that they plan on “continuing the show every 3-4 months.”