French bulldogs are the ‘it’ dogs 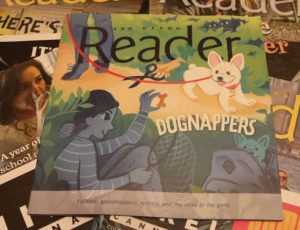 The original story was featured in the print edition of the San Diego Reader on April 28, 2021.

On February 3, a neighbor’s camera caught Brody wandering away from his San Lorenzo, Northern California home. The next day and 500-plus miles south, Brody mysteriously crossed into Tijuana.

Brody is a four-year-old French bulldog, the same breed as Lady Gaga’s two pets, the ones that were recently “dognapped.”

For two weeks, nobody back at Brody’s home, 24 miles southeast of San Francisco, knew of his whereabouts.

“My mom is extremely heartbroken,” posted Audra Campbell on Facebook, hours after the brown-furred canine vanished. “My mom’s emotional support dog is missing. Message me if you’ve seen him. He is friendly and snorts like a pig.”

Three days later, Campbell updated Brody’s online photos with a $1000 no-questions-asked reward. The images went viral throughout the Bay Area and beyond.

Benjamin Gonzalez, a former Bay Area resident who was deported in 2019 and now lives in Tijuana, saw Brody caged and for sale on an undisclosed Tijuana street, according to EastBayTimes.com.

Days later, Gonzalez found out through his relatives in the Bay Area that the dog he negotiated down to $1000 and purchased was the missing Brody.

“Gonzalez first reached out to us via Facebook and phone,” Campbell explained to me on March 16. “Our phone numbers were on Brody’s missing posters online, and Brody has a serial number tattooed on his leg that matches his registration numbers on his paperwork.”

Gonzalez then FaceTimed with Campbell’s 64-year-old mother, Debbie Campbell, so that she could see Brody. 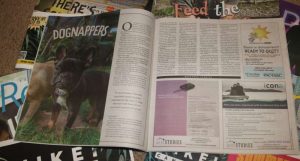 “My mom was overjoyed and extremely emotional; she could not believe what she was hearing and seeing.”

Gonzalez agreed to relinquish Brody to the Campbells.

“On February 27, my brother Eric Campbell drove down to San Diego and met one of Gonzalez’s family members near a mall,” Campbell continued.

Eric handed over $1000 to Gonzalez’s family member, picked up Brody, and drove the eight hours back to San Lorenzo.

“When the dog was with me, it was not happy,” Gonzalez said in the East Bay Times interview. “Something was wrong. Then I saw the videos when it got back to the Bay Area. Now I know it’s home.”

Throughout the near-month-long ordeal, Campbell said she thought their family would never see Brody again. “My mom was so happy to have him back in her arms again finally. Brody helps her with severe depression due to pain in her legs and her back. While they play together, Brody helps to keep her mind occupied from the pain; he keeps her company while she’s stuck in bed. He provides much happiness to her.”

Campbell believes Brody was targeted because of his breed. “In recent years, Frenchie popularity seems to have exploded as the new ‘it’ dog. Breeders sell them for an exorbitant amount of money.”

“How much?” I asked Campbell.

“Judging by recent postings on Craigslist up here, anywhere from $3000-$5000. Dognappers see the dollar signs and an easy way to make money: via ransom, backyard breeding.”

I spoke with Diane on March 8 as she played with Oodle. We hung out at the Ward Canyon Dog Park by Adams Avenue and Interstate 15 in Normal Heights.

I squatted down and caressed Oodle’s head. He licked my face and eyeglasses. “How much do French Bulldogs sell for around here?” I asked Diane.

“Frenchies go for a couple of thousand dollars each.”

That money may have motivated the gunman who, on February 24 in West Hollywood, hopped out of a white sedan, approached Ryan Fischer, shot him to the ground, and took two of the three French bulldogs Fischer was walking. The incident was caught on a surveillance video aired by TMZ.

Fisher yelled, “Help me, I’ve been shot,” as he lay on the pavement with the third Frenchie, Miss Asia. 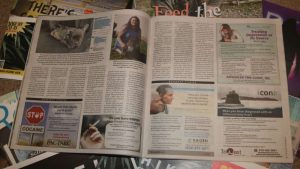 The day after, actor Danny Trejo — whom I photographed with Chopper the Biker Dog and interviewed for a 2014 Reader article titled “Bikers for Christ roll up to Mt. Soledad” — tweeted out to the French bulldogs’ owner: “So sorry to hear about your dogs @ladygaga, we got people out there looking for them.”

On February 26, the Grammy award-winning singer tweeted “My beloved dogs Koji and Gustav were taken in Hollywood two nights ago. My heart is sick, and I am praying my family will be whole again with an act of kindness. I will pay $500,000 for their safe return. Email KojiandGustav@gmail.com to contact us.”

On March 2, the Los Angeles Police Department tweeted “Both of Lady Gaga’s dogs have been turned in to a local police station …. they have been safely reunited with Lady Gaga’s representatives.”

Back down in San Diego County, French bulldogs, their owners, and breeders were targeted long before Lady Gaga’s pooches were snatched up. Frenchie-thefts and Frenchie-robberies have been reported frequently throughout San Diego County, since 2012, when a downtown surveillance camera captured a woman stealing Mozzy, a French bulldog. On the incriminating video aired by ABC 10 News, a woman is witnessed luring Mozzy to the doorway of a loan office located on Front Street. The woman kneels and holds the door open, then Mozzy bolts behind her. After the clip aired, the police caught the dognapper and took her to jail. 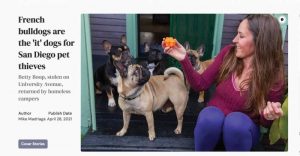 “Have the police found your dogs?” I asked Randi Allen on March 4. “No, I’m disappointed. They kept telling me it was a property crime.”

Almost nine years after the police reunited Mozzy with his owner, on January 26, the San Diego Police Department posted on Facebook about another Frenchie abduction in a southeast neighborhood. “A man tries to sell his French Bulldog puppy when the potential buyer grabs it and runs into a car close by and drives off without paying for it. The owner of the puppy follows the car and calls the police. He gave his direction of travel and a license plate of the car. Officers were able to catch up to the driver and found the puppy. That could have been a ‘Ruff’ day, but luckily he was reunited with his owner.”

Randi Allen was not as lucky with her three French bulldogs. “I was hit by their car when they stole my puppies, and then they floored it,” she commented underneath the police department’s previous post. “I had no way off of the [hood and]… I fell quite hard. I hope it’s them. I can ID them.”

On January 8, Allen posted a photo of her French bulldogs and offered a $10,000 reward for all three of them. “I was robbed at 2 pm[on] 1/7/21,” she captioned the photo. “I expected one or maybe two people to show up about 1:30 pm to view the puppies, [but] five sketchy people showed up. Only two puppies were for sale; they attempted to take all four, but one escaped. They fled to a …. silver 2000 Civic style car with a broken windshield wiper.”

“Have the police found your dogs?” I asked her on March 4. “No, I’m disappointed. They kept telling me it was a property crime.”

On the State of California government website, it states: “Every person who feloniously steals, takes, or carries away a dog of another which is of a value exceeding nine hundred fifty dollars ($950) is guilty of grand theft.”

“And just in case I get attacked as a breeder in the article,” Allen continued. “I have many clients who will attest to my commitment to my pups. The dogs sleep on my bed every night.”

Allen’s Facebook timeline is packed with photos and videos of her dogs, ducks, and artwork spanning back to 2018.

Diane, the dog watcher I met at Ward Canyon Dog Park, is extra careful when it comes to selling pooches. “First of all, you don’t let someone in your house without a driver’s license; check them out first,” she said to me. “Make them fax you or text you a photo of their driver’s license, so you have a backup in case they do steal your dogs.”

Regarding Allen’s misfortunes, Diane says, “I don’t have that much sympathy, because if you are going to be selling dogs for money, a respectable, responsible breeder does not sell to the general public. They check you out first, and they speak to you.

“When I adopted my dogs from the rescue, there was a three-page questionnaire; she should at least have papers on these people before she accepts them because you don’t know who the hell they are.”

“I’m in the market to buy a dog. What are signs to look for when I buy one?” I asked Diane.

“Make sure you go to their house and see where the puppies are raised. See what condition the mother lives in; that’s the most important thing, to ensure that the mothers are treated well. Make sure you meet the mother because temperament is genetically passed down from the mother to her puppies. You want a happy and easy-going mother.”

LaValle, a 20-year veterinary technician, reached out to me in September. She said that by talking to some area locals, “I found out a homeless guy stole Betty Boop. I was looking for Betty all over the encampments in the area. I spoke to many homeless people, and the community came together like crazy for this pup.”

After two days of pounding the streets, alleys, and parks, “another homeless person ended up taking Betty back to me. They regulated the thief within their community and ran him out, and his huge encampment was gone by the morning. I was able to help a neighbor recover his stolen bicycle baby seat — the thief used that seat to transport Betty.”

French Bulldogs are ranked number five on the Top 10 Most Stolen Dog Breeds list on caninejournal.com. “Although 92 percent of pet parents consider dogs members of their family, most state laws don’t agree,” according to the pet resource site. “You may have heard the term ‘dognapping,’ but it’s misleading from a legal standpoint. Kidnapping a person is a severe criminal offense. However, the law does not see it that way with kidnapped dogs…. Dogs, instead, are seen as personal property…. That’s why pet theft most often falls under a state’s general theft and larceny laws. In these states, stealing a pet isn’t distinguished in any way from taking a TV, jewelry, or other possessions…. California and Louisiana impose different charges and penalties based on the monetary value of the stolen dog.”

Fischer, Lady Gaga’s dog walker, survived his gunshot wound. Days after he was gunned down, he posted a photo on social media from his hospital bed. “Your babies are back, and the family is whole… we did it!”

“I continue to love you, Ryan Fischer,” Lady Gaga responded online. “You risked your life to fight for our family. You’re forever a hero.”

As this article goes to print, the Hollywood dognappers have not been caught.

Allen, the OB artist who lost her three French bulldogs to dognappers in January, recently found one of her missing French bulldogs in City Heights through a Craigslist ad. On March 14, her Facebook update post read in part “I was instantly sure they had no idea about [the dog’s] background; I felt 100 percent safe telling them the dog was stolen. I paid what they paid for her [in] good faith.”