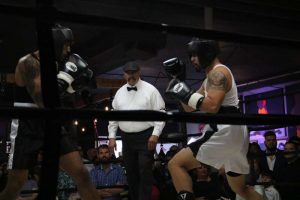 Boxers in the welterweight slugfest

Parked outside of the House of Boxing venue on September 30 was a 1935 San Diego police paddywagon with two guys holding faux tommy guns. One guy was wearing a classic zoot suit, the other, Lester Gutierrez, was decked out in 1940s attire.

“We did have an incident with a gentleman [at 7:30 p.m.],” Gutierrez said. “He was a little bit under the influence and we had to ask him to step out, but he kept giving up a fight — so I pushed him a little bit.”

Lots of people were trying to get into the “Barnburner — the Heart of Boxing” event held at 2304 Reo Drive in Paradise Hills.

“It’s a tough crowd,” said a fan in line. Another said, “Hurry, the fights are gonna start soon.” 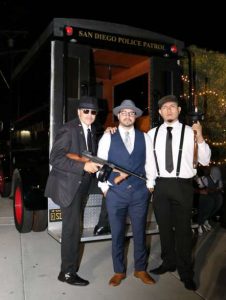 Gutierrez checked their red wristbands and gave the second doorman inside a nod. A velvet rope was then uncuffed from the stanchion, and the next batch of people was let in.

The boxing fans were greeted with loud swing music and the animated voice of Dave Rivas. He spoke the slang and in a tone suggestive of a radio announcer from the ’40s.

“The first bout of the night is between two lightweights Nico ‘Pancho Villa’ Marchon versus ‘Smokin” Joe Fonseca. There will be no flash photography during the matches.”

The spot was jam-packed with 1940s cosplayers. Even the small girl passing out “the largest boxing art exhibition in the nation” flyers had on a newsboy costume.

“We’ve been planning this event for seven months,” Ruben Torres said, “[and] we had about 1500 attendees that came and went.” Torres was the promoter dressed in a pinstriped suit, shiny stompers, and dark sunglasses.

Mary Jane Zamora has been boxing at the gym for four years.

“These couple of pieces were done by our artists in prison,” he said, “and this one [a portrait of Al Capone] was hooked up by OG Abel, the tattoo artist.”

Throughout the venue there were more than 200 drawings, paintings, and vintage-looking event posters of boxing legends from all eras. Muhammad Ali, Floyd Mayweather, Mike Tyson, Roberto Duran, Julio Cesar Chavez (Sr. and Jr.), and Canelo Alvarez were some of the subjects for the hundred or so artists (from around the world) that submitted their work. Don King, Rocky Balboa, and Little Mac (from the 1980s Nintendo classic) also served as inspirations.

“My favorite one is of Biggie Smalls,” said Mary Jane Zamora. “I loved how the artist mixed old-school hip-hop with the [boxing] theme.” 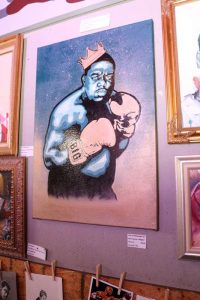 The Biggie Smalls portrait was sold.

Zamora is a 19-year-old college student who has been boxing at the gym for four years. This night she hung up her leather gloves and “spivvyed-up” with a 1940s black-and-white dress and bumper (hair) bangs to match.

Jhet “The Professor” Morales was the next fighter on the bill against Billie “The Brown Bomber” Rodel. Both were welterweights.

“[The owners of the gym] have been boxing for generations and these guys are deeply involved in our community,” Morales said. He was referring to Carlos Barragan Sr. and Carlos Barragan Jr., who started training their Paradise Hills neighborhood kids from their backyard in 1991. In 2011, the other brother, David, opened the gym and they started training adults as well.

Morales, 32, has been boxing for about eight years. His favorite art pieces were the ones dedicated to Manny Pacquiao. One artist painted the boxer/senator’s face with a Filipino flag underneath on a boxing glove. 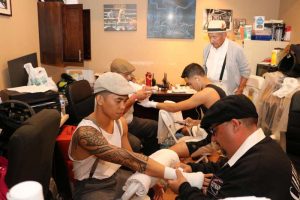 Boxers getting taped up.

In the back where the boxers were getting taped up, there were about 50 gloves hanging that were painted in boxing-related motifs.

“[So far] we sold about 28 art pieces,” Torres said. Some of the proceeds will go to his Love Thy Neighbor Movement organization, a nonprofit that helps orphans and the elderly on both sides of the border. Most of the items were in the $100 range but some went for “megabucks.”

“Ladies and gentlemen, step right up,” said the announcer.

He introduced the two welterweights and shortly thereafter hammered the ringside bell to start the slugfest. Morales caught a right hand and was knocked down for the count. 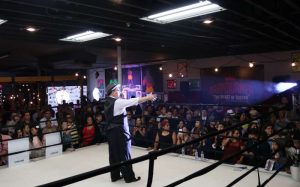 Dave Rivas’s delivery was part of the ’40s flashback.

“These are some good fights,” said Rene Acevedo who rolled through with his kids and his Viejitos car club. He had a 1947 Chevy convertible “bomb” parked outside with six others. “My grandfather was a boxer, too,” he said. “There’s a flier in there when he fought at Tijuana in 1947.” Like himself, his kids were decked out in period fashions. One was wearing an old baseball uniform and the other a Boy Scout uniform — both outfits were worn by Paradise Valley kids back in the day.

The entrance fee was $15 to $20 and included with the live entertainment were hors d’oeuvres and non-alcoholic drinks served in small shot glasses. Other grub and refreshments were available for a few bucks extra. And if one wanted to swig some “leaded” drinks, the VFW was conveniently next door.

The event went on until midnight with three more fights, but this reporter had to skedaddle out for the next scoop across town. 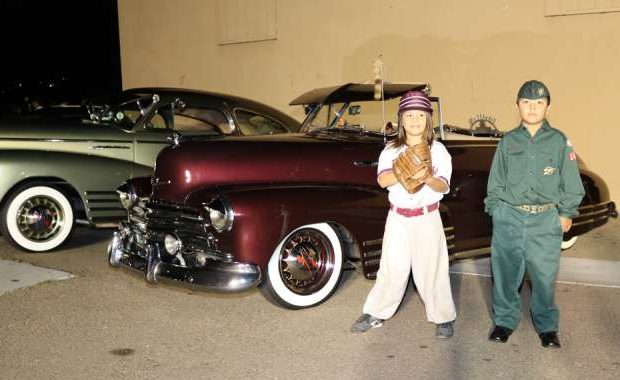 Both outfits were worn by Paradise Valley kids back in the day. 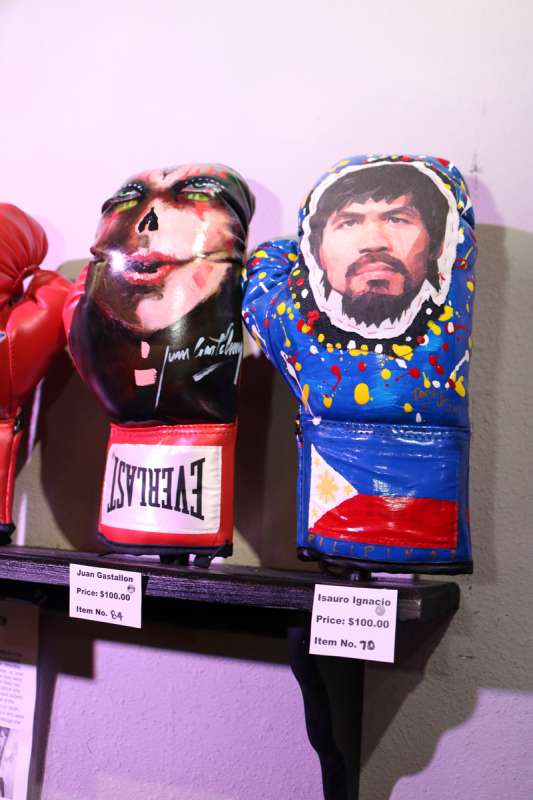 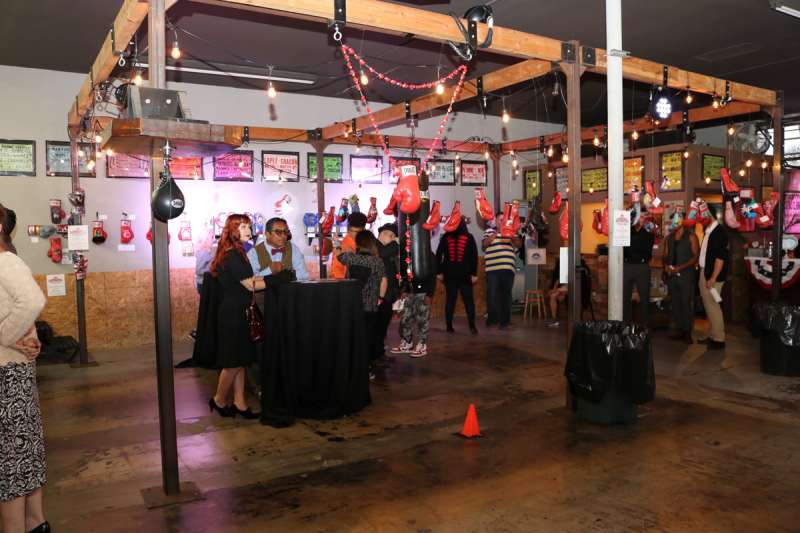