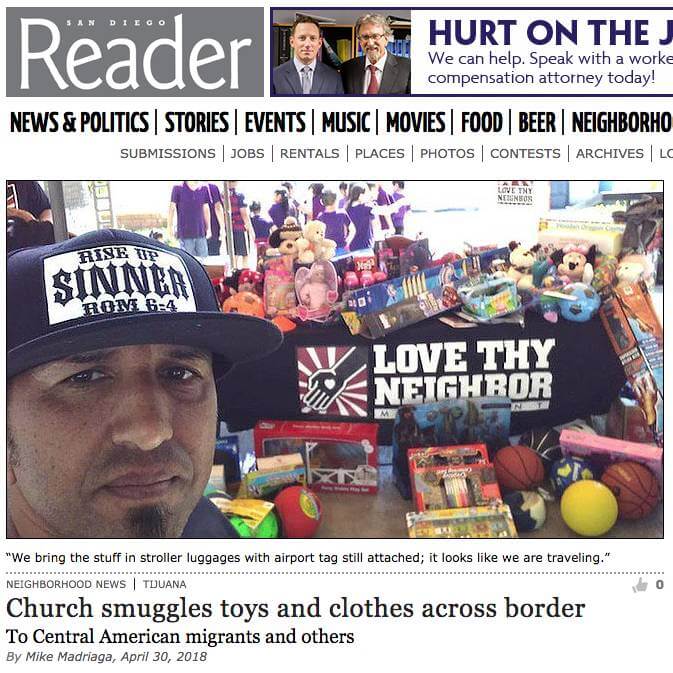 El Día Del Niño came 4 days early to some of the Central American kids that were part of the caravan into Tijuana last Wednesday and Thursday.

Ricardo, from Chula Vista, was outside of the Movimiento Juventud 2000 shelter in Tijuana, at about 5 p.m. on April 26. He was handing out toys to some of the newly arrived migrants from Honduras, Guatemala and El Salvador.

One kid was happy to receive a Stormtrooper doll, another in an Elmo shirt received a book, and a handful of kids received soccer balls. 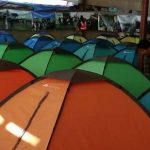 There were about 66 tents inside that accommodate two people each and 12 bunkbeds for the children.

El Día Del Niño (Children’s Day) is celebrated in Mexico on April 30th, as a tribute to children and their importance to society.

Movimiento Juventud 2000 is located at Avenida Constitucion (a block away from Avenida Revolución). In 2016 they helped Haitian refugees.

“Right now, we need food, clothes and shoes,” Angel said. He is a 14-year-old boy that was kicking his new soccer ball with his sandals. Other kids from the caravan were playing barefoot.

“We always bring shoes too,” Ricardo said. Last month, I spoke to him at the Love Thy Neighbor donation drop-off spot at the Light Church at Church and Center Avenues in Chula Vista. Ricardo and his wife Chely, are a part of the charity that’s been helping at the border since 2010.

“We bring the stuff in stroller luggages with airport tags still attached,” Ricardo said, “so that if the aduana (Mexican customs) pops our trunk, it looks like we are traveling.”

In December of 2016, when Love Thy Neighbor crossed about 4,000 new toys through the San Ysidro border to distribute to the children of Tijuana and Rosarito, one of their trucks got popped by a Mexican official, and was sent back to the U.S.

“Lately, we don’t cross stuff in trash bags, especially used clothing,” Ricardo said, “because it is not legal and that’s how we get caught.”

Ricardo, his wife and others in the organization, make weekly trips to Tijuana to leave toys, food, used clothes, shoes, and canned food at his relatives’ houses in Tijuana. When a big day like this occurs, they caravan to the stash house to pick up the accumulated donations. 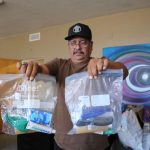 Ricardo and his wife were prepping dozens of one-gallon ziplock baggies, which they filled with soap, tissue packets, toothpaste, toothbrushes and floss.

Earlier in the day, at about 2:30 p.m., Ricardo and Chely met with their comrades Elias, Ruben Torres, and others and some members from the Avance San Diego organization, to distribute toys to the students of Escuela Primaria Francisco Eusebio Kino School.

“We surprised the kids with over 100 toys and four bikes,” Elias said.

“We celebrated Children’s Day earlier because we have the bike giveaway at San Ysidro on Monday,” said Ruben Torres, founder of Love Thy Neighbor.

At about 4 p.m., Torres, Ricardo, and Chely drove to Movimiento Juventud 2000, which is about 11 miles away in Zona Norte by the border.

When the three arrived, Chely and Ricardo passed out the toys from the trunk of their vehicle and toiletries to the adults inside. Torres noticed a lot of police around the shelter, so he pulled out his phone and started streaming live on Facebook.

“They told me they had about 150 [new] refugees come in,” Torres said as he walked inside the facility. “For dinner time, they had beans, rice, bread, and water …. and somebody brought a round of bean burritos.”

There were about 66 tents inside that accommodate two people each and 12 bunkbeds for the children. The shelter this day was at “full capacity.” 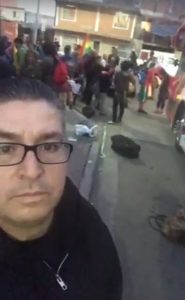 Ruben Torres outside of Movimiento Juventud 2000

Torres then noticed another busload pulled in.

“I don’t know how this is going to work,” Torres said, “this is mayhem, there’s no way this shelter is going hold this many people, and the worst part is there’s another bus pulling in.”

At about 7:00 p.m., there was a line of people waiting around the corner from the shelter. “We are on the other side of the building over here, and if you see behind me, there’s huge long line of Hondurans that just got off the bus.”

The shelter allowed the newly arrived migrants to use the two bathrooms. “They definitely need some toiletries and toilet paper as well,” Torres said.

On Facebook live, he requested his viewers to donate goods at their Chula Vista location so that he and his team could return and help the new migrants. “They also need new tents and anti-lice medicine/shampoo,” he said, “there’s a huge lice breakout [here].”

(During my interview with Ricardo back at their drop-off station in Chula Vista, he and his wife were prepping dozens of one-gallon ziplock baggies, which they filled with soap, tissue packets, toothpaste, toothbrushes and floss.)

At about 7:30 p.m., Torres turned his phone-camera back on to film. “There’s a whole new busload that came in right about now,” he said, “and from the looks of it, I was kinda wondering why the dude was holding the rainbow flag over here earlier, so I think this whole bus is [full of] transgender immigrants coming in from Honduras, and they have their families [and friends] meeting them here.”

The next day I messaged Cynthia Marie San Gabriel, one of the volunteers at the Movimiento Juventud 2000. 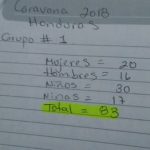 “The total amount I have are 230,” she said, “then this week was 132 plus 48 that came yesterday. They are mostly from Honduras, El Salvador, and Guatemala. There are five families, and mostly women and children.”