Recently, a Poway thrift-store owner made what’s being called the biggest score in local comics trading history when he bought the collection of a deceased L.A.-area hoarder.

“The house is an extreme case [of a] hoarder’s scenario,” Rene Nezhoda said. “Whatever you think of as much a house can be packed, that’s what it is. I saw, like, 5000 DVDs right up in the front and all of the thick Marvel [hardbound] books and showcases full of collectibles.”

Nezhoda showed me video clips of the contents of the hoarder house that he recently purchased. One was of a room filled with stuff stacked so high that a full-size video-arcade machine was buried almost to its glass marquee up top. “That’s an original Tron machine,” Nezhoda pointed out. “[The owner] slept in a small seven-by-three-foot area and the rest of the house was full like this.” 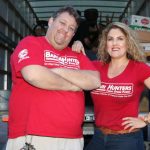 Nezhoda, 40, and his wife Casey, 43, are used to sifting through hoarder houses and storage lockers. The Poway couple are star buyers on the Storage Wars television show on the A&E network. They also own Bargain Hunters Thrift Store located at 12845 Poway Road in Poway.

On February 7th at about 8:30 p.m., Rene had just finished unloading a fraction of what he called “the biggest comic and toy collection” landed by a local dealer. 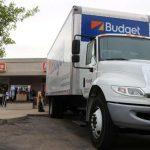 Unloading a truck load in the Bargain Hunters Thrift Store.

“Hey, Mike and PJ, come inside,” he said to me and another comic dealer. “I have something to show you.”

His store closes daily at 6 p.m., but he opened it up to give us a sneak-peak of the score. He has a box of about 25 comic books that were encased in mylar sleeves.

“Check this out,” he said as he pulled out a Strange Worlds comic book from the 1950s.

“How long have you been doing [the San Diego] Comic-Con?” Nezhoda asked PJ. 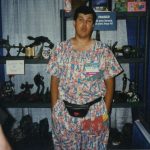 PJ remembers the days when Comic-Con was in the El Cortez. Throughout the years, he’s missed only two of the biggest annual comic-book show. He has bought, sold, traded, and graded hundreds of collections. “This [collection] is the biggest that I’ve seen found by a San Diegan,” he said.

“Let me show you an amazing comic book,” Nezhoda said. 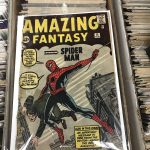 Amazing Fantasy #15 is the first appearance of Spider Man

Nezhoda discovered the comics in a storage facility and house in the city of El Monte (about 17 miles east of downtown Los Angeles). Many of the first comics that Nezhoda brought to San Diego were being blown out on his showroom floor.

Marvin Ellorin, a U.S. Postal Service employee who’s been collecting comics since 1971, said, “I was kinda surprised at the ‘bronze-age’ comics that are being sold for $1.99. They are pretty nice: they are colorful and have a good luster.”

Many of the vintage 1970s-1980s comic books out for sale (some valued at $50 each) did not have any backing boards and plastics, which means that they were stashed a long time ago. In the mid-1980s, collectors started using boards and plastic bags to protect their comics from becoming creased and weathered. 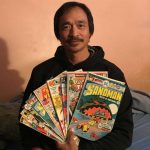 Marvin Ellorin and his new haul.

Ellorin picked up some near-mint versions of the 1970s comic book called Demon, by Jack Kirby, sans bag and board, and deemed that “they withstood the test of time.”

The collection was initially owned by two brothers.

“They had a comic-book store which had comic books, action figures, movie posters, and different type of collectibles,” Nezhoda said. “They have been collecting since the early 1950s, and their store was in business from 1979 to 2012. The first brother passed away in 2012 from diabetes.”

(Nezhoda requested that we keep the deceased brother anonymous until Nezhoda clears the contents of his old house. He doesn’t want collectors to get snoopy and locate the house. Nezhoda has until March 1st to clean out the property.) 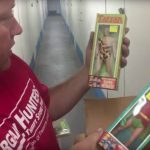 Storage Wars, and I got these two storage units’ [but because] he also had diabetes problems, he said, ‘I just can’t handle these lockers, and if I can’t find someone to sell them to I’m just going to donate them or something, because every month I’m paying $800 in storage [and] it’s killing me.”

Nezhoda purchased the 12´x10´ and 20´x8´ storage lockers full of collectibles and “Don was super-happy” he said.

Nezhoda also took over the locker payments until he removed the last of the contents early last month.

When Nezhoda loaded up his truck, he says, the storage-facility “employee said that Don died in November.” The employee also reminded him of the hoarder-house that Don spoke about when he was alive. 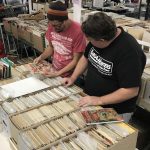 PJ is grading a copy of X-Men #1. He and Nezhoda are surrounded by some of the comic collection that is being blown out for $1.99 apiece.

“I ended up going to [Don’s] dad’s house, and I introduced myself,” Nezhoda said. “I explained that Don was telling me, in July 2017, that he didn’t want to sell the whole house because he wanted to go through it, because there’s so much rare stuff in it, supposedly.”

Nezhoda said that the 91-year-old father was going to have someone throw away the contents inside the house and then clean the whole property.

“The house was in probate, and they are waiting to finish [clearing] the house,” he said, “so they can sell the house, because it’s worth a half a million; it’s free and clear, and the dad wants the money for retirement.”

The 2000-square-foot house close to the El Monte storage unit also has a two car garage that has a print shop inside and an additional 175-square-foot shed in the back that’s packed from top to bottom full of toys.

“I made [the father] an offer of tens of thousands of dollars and we made a deal,” Nezhoda said. “He can’t believe it, because he was going to throw the stuff away.”

Nezhoda said that with the labor of a team of four, transit of the product, and three 12´x10´ storage lockers, he’s probably going to be into the total investment for $80,000, maybe more. 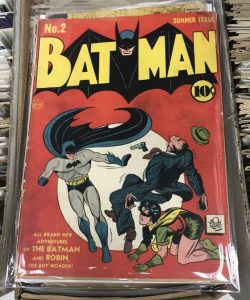 “PJ, you work for comics, right?” he joked as they inspected more of the rare finds. There was an X-Men #1, Daredevil #1, Justice League of America #28, Silver Surfer #1, Spider-Man #2, and #14, other key silver-age books and golden-age books — including the Flash #1. “Someone wants to buy this from me right now,” Nezhoda said.

On Nezhoda’s video clip of the hoarder house, he and his wife Casey are wearing surgical masks as they sift through the rooms stacked with comics and toys. “It wasn’t that bad; it was a little dusty,” Casey said, “and nobody has, like, really been in there for, like, six years.”

“There were also rats and rat poop,” Rene said. “I’ve bought a lot of collections and houses in my life and I have never been overwhelmed, but this house makes me overwhelmed.”

Rene Nezhoda started the buy-and-sell business at eight years old, when his parents gave him and his brother some of their leftover antique pickings from the barnyards in Vienna, Austria. “Once a month you could set up on the side of the river and sell whatever you wanted to,” he said. “I made [an equivalent to a] few hundred dollars and had no clue what I sold and everything sold fast. I’m sure the pickers were very happy. I came home with the money and [my parents] would say, ‘You earned it and you keep it.’” 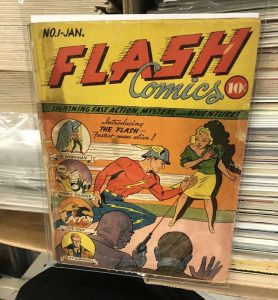 Shortly after, he and his family moved to the U.S. to “pursue the American dream.” Nezhoda helped his parents run their publishing business in Las Vegas. He then partnered on a casino-collectible store in the Tropicana Hotel. Early this century he became a powerseller on eBay. He met Casey, a native San Diegan, they got married, and had a daughter 12 years ago. They opened their thrift store in 2011.

The couple got picked up toward the end of the fourth season of Storage Wars. “Rene didn’t think [during the first season] that America was going to embrace the show,” Casey said.

“You know when you do a first season of any show the money is nothing and I had an extremely successful business already,” Rene said. “And I didn’t think anybody was going to watch it, to be honest, because to me it’s so normal to hunt for treasures, and it’s hard for me to get excited — but I got excited with this comic deal.”

Rene pulled out for us to view 25 or so books that PJ estimated as being worth $200,000. But Rene emphasized that the price can be lower, after he gets some of them graded by the CGC Comics company; or possibly higher, if two of the right bidders go after his comic books at the Heritage Auctions.

Rene Nezhoda has over 60,000 more comic books and hundreds of vintage toys, posters, and collector cards to sort through.

Published in the San Diego Reader on February 15, 2018 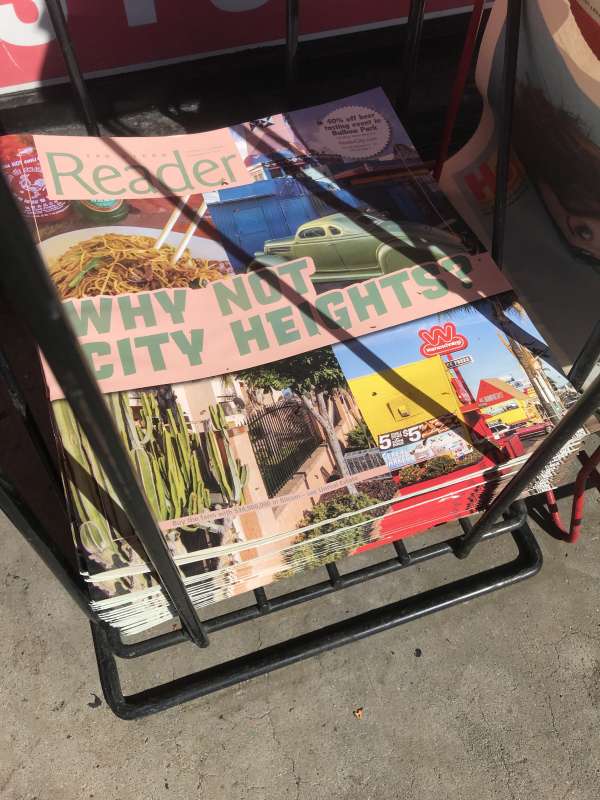 The article was featured inside the San Diego Reader magazine on February 15, 2018. 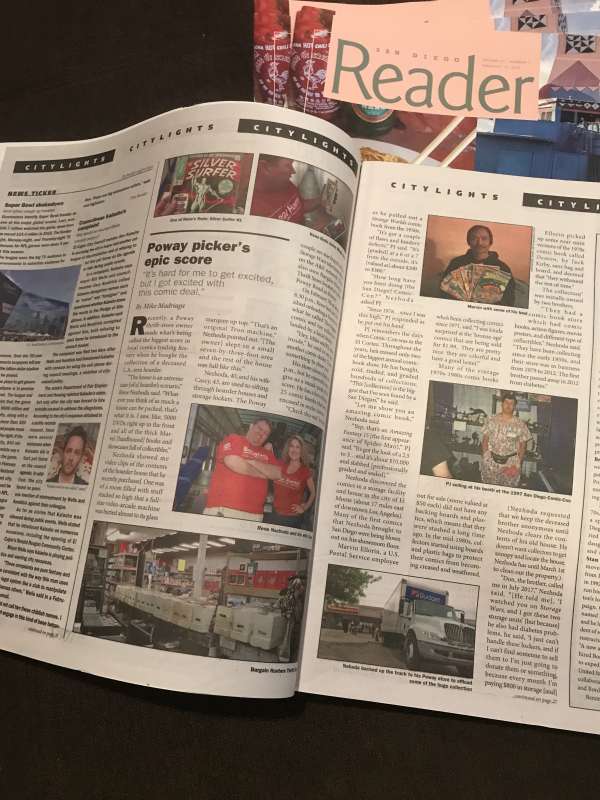