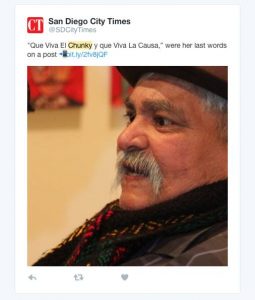 Ramon “Chunky” Sanchez at the HeART of Loteria event in 2013
Photo: Mike Madriaga

Ixcatli A. Sanchez confirmed on Facebook the passing of her father, a leader of the San Diego Chicano movement, on Oct. 28.

Sanchez was a musician, songwriter, educator, and activist. He became a cultural icon and leader of the Chicano community.

In 2013, Sanchez received a National Endowment for the Arts’ National Heritage Fellowship, which recognizes “the recipients’ artistic excellence and support their continuing contributions to our nation’s traditional arts heritage.”

“My Pops began his next journey in this phase we call life,” Ixcatli Sanchez posted. “At this time, our family requests privacy before we plan arrangements. We want to THANK all that have supported us and have been there in our time of need.”