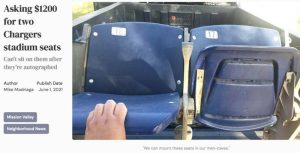 The original story was published in the print edition of the San Diego Reader on June 1, 2021.

On May 29, wellsready2fish, a local eBay seller, sold a concrete chunk from the recently demolished SDCCU stadium — for $15. The online seller sold a different concrete chunk a week prior titled “San Diego Jack Murphy Qualcomm Stadium …. Souvenir Authentic” for $10.

“So happy to have this little chunk representing such a big part of my life!” exclaimed the seller’s customer.

Other eBay sellers sell the original Charger blue and white-colored metal signs for between $80 to $100 apiece; these helped the fans navigate through the halls of the brutalist design structure envisioned by Frank L. Hope & Associates in the 1960s.

When the stadium was completed and opened to the San Diego Chargers and the San Diego Padres and their fans, on August 8, 1967, it was called the San Diego Stadium. In 1980, it was renamed Jack Murphy Stadium, after former The San Diego Union newspaper’s sports editor. In 1997, Qualcomm, a local wireless communications company, paid $18 million for the naming rights. Shortly after, in preparation for Super Bowl XXXII in ’98, the stadium’s staff added 11,000 seats to accommodate the 71,000 or so fans.

“Qualcomm San Diego Stadium Seats Pair Seats 17 & 18 Local Pick Up The Murph!!” reads one eBay ad’s header as this article goes to print. The seller sells the tandem, Charger blue colored, fold-up seats in used condition for $1,200. The same seller sold seats number 15 and 16 for $899 back in March.

“That’s ($899) so totally worth it,” commented Michael M., a local sports card and autograph collector. “This is what we call a purposeful collectible: we can mount these seats in our man-caves and watch our football and baseball games as we did from the SDCCU Stadium.”

San Diego County Credit Union (SDCCU), a local company, purchased the naming rights to the stadium in 2017, a year after the San Diego Chargers bolted to Los Angeles.

“I’m still a fan of the Chargers!” continued Michael. “I’m in the market for those seats at $500-$800 depending on condition. I’ll buy them and get them signed by old-school Chargers and Padres players: ones who played baseball at ‘The Q’ or ‘the Murph’ before moving to Petco Park. I’ll also have SDSU Aztecs who played football here to sign the seats. After the seats are all fully autographed, they won’t be purposeful anymore. Other collectors are buying the seats to get autographed by musicians that performed here.”

Then in July of last year, the city of San Diego reportedly sold the Mission Valley stadium site to San Diego State University for $86.2 million. “The planned 35,000-capacity Aztec Stadium would be among the first projects to be built as part of the university’s Mission Valley campus,” NBC 7 San Diego reported in August. “The project boasts new educational facilities, a 450-bed hotel and a 34-acre city-owned river park. That river park’s construction and maintenance will be the university’s responsibility but will be accessible by the public.”

“Part of the hype on the stadium memorabilia is coming from the current Padre fans,” Michael opined. “Fans tend to spend money on throwback merch or vintage stuff when their teams do well.”