Car shows are different in Tijuana 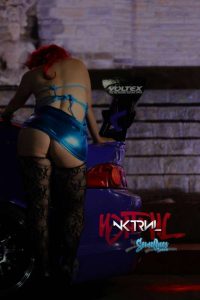 Some of the dancers were outside, modifying their moves to get very close to the cars.
PHOTO BY SID ROCHA

On September 15, about a hundred Tijuana street racers skipped the unadvertised drag races and met up with other crews in front of Déjà Vu’s Tijuana strip club (at Plaza Pueblo Amigo).

“It’s not far at all,” Omar said, as he rolled in from San Ysidro in his white 1990 Honda Civic. “It’s only, like, a five-minute-drive from the line.”

At about 6:30 p.m., the parking lot in front of the 100,000-square-foot strip club was full. There were about 25 lowered import cars and 25 motorcycles competing against one another.

“This is our first NKTRNL Car Meet,” said Oscar Sanchez. “In the U.S., you guys have the Krispy Kreme [car meets] — and here we have this.”

Sanchez, 32, is one-half of Some Ones Syndicate, the promotional company that put together the car-show-competition which is pronounced “nocturnal” by us gringos. For 250 pesos ($15), one could compete to win a trophy and also get some “artistic” shots of their car or crotch-rocket — with one or all of the four strippers present. Sid Rocha, Sanchez’s cousin and partner in this operation, served as the main photographer.

“Pues vamos! (Let’s go!),” he captioned on his Facebook page underneath a photo of three import race cars that sat at the base of the club whose design seems inspired by Aztec culture and Vegas nightlife. 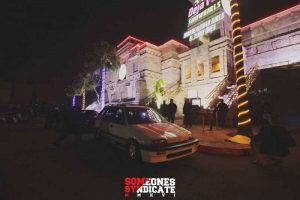 “We got everything at this event,” said Ricardo Campos. “Cars, girls, and even photographers.”

Campos, 39, is an engineer who owns a black Honda Civic with a full engine set-up, a Mugen body kit, and slammed on some blue anodized wheels. He is a part of the Empire of Japan car club.

Omar is a 34-year-old show-car competitor who competes on both sides of the border. He noticed something different with the Mexico-based car meets that he attends. Aside from this gathering being held in front of “the biggest strip club in the world” (as stated on the website), there is “more respect with the cars [and owners here],” he said. “[And] you do not have to babysit the people from leaning or touching the cars.” 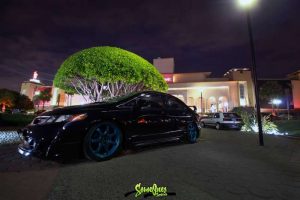 This Honda Civic was winner of the 2006-and-up class.
PHOTO BY SID ROCHA

At a recent car meet on the U.S side, some spectators were filmed jumping and flipping on the other vehicles that were present.

Omar’s ex-grocery getter is a part of the “wagon movement” for the car tuners. Although smaller than the typical station wagon, it’s a part of the hot genre of vehicles to customize. And because of its larger trunk space, Omar can haul his bigger tools to his onsite construction jobs — in style.

At the end of the night, Omar won the best of show trophy and Campos won the 2006-and-up class award. By about 1 a.m., some of the racers went out to cruise Avenida Revolución, others went to race by Hospital General de Tijuana, and some walked up the stairs to enter the strip club. 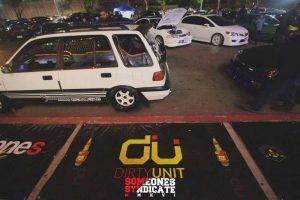 Omar’s grocery-getter is part of the Wagon Movement.
PHOTO BY SID ROCHA 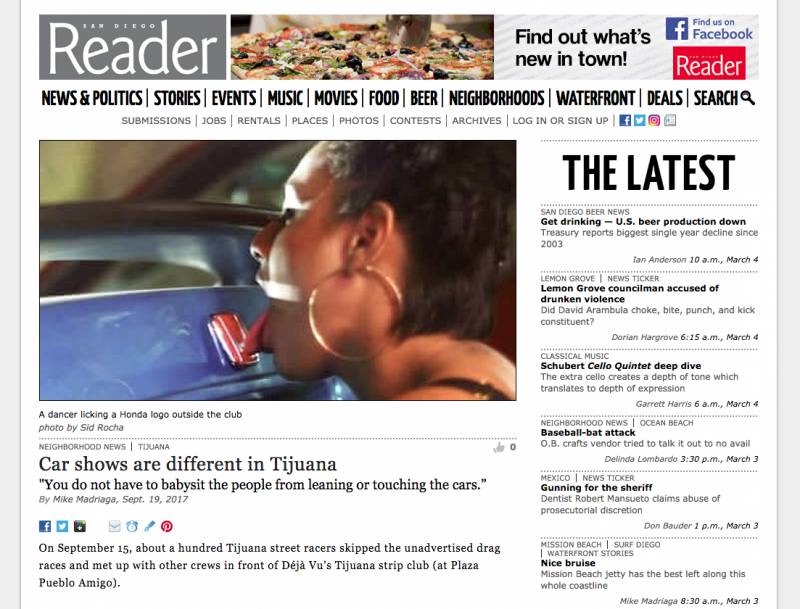 “We got everything at this event,” said Ricardo Campos. “Cars, girls, and even photographers.”