By Mike Madriaga
Bonnie Anderson is a 76-year-old business and property owner from Webster. Like many San Diegans, she’s rented part of her house near Federal and Euclid to pay for bills and the balance of her home’s mortgage . “The rent is only $1,200 a month, and I pay all utilities,” Anderson said to me on October 22.

Part of her house, which she’s owned for 50 years and now subleases, is one of 53,664 San Diego County homes that’s behind in rent.

“When was the last time you received a payment from your tenant?” I asked Anderson. 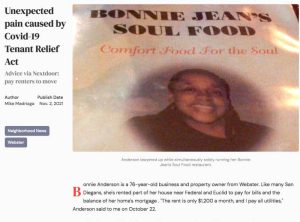 The original story was featured in the print edition of the San Diego Reader on November 10, 2021.

“Last October 2020. The attorneys told me the renter needed to pay 25 percent, and they could not stay there for free. Plus, it’s a big place, like 1000 square feet, with a large bathroom to fit a wheelchair. And they haven’t paid anything, and they refuse to sign the paper so I would get help from the government.”

Until September 30, the Covid-19 Rental Housing Recovery Act and California’s Covid-19 Tenant Relief Act helps protect San Diego renters from eviction for nonpayment of rent, if the tenant gives the landlord a declaration that is signed.

Starting October 1, the state’s website states that a landlord like Anderson must apply for rental assistance before they move forward to evict a tenant. The state adds that tenants with unpaid rent can still live in their homes after September 30. But that’s assuming they’ve applied for state or local help.

“I sent him a letter stating I was going to sue him,” Andersen continued. “But they’re still here.”

There is an estimated $202 million in total rent debt in San Diego County according to the National Equity Atlas. Of those 53,664 homes behind in rent, there are believed to be around 69,200 children in those homes.

Anderson’s children and brother lived in the area where her “non-paying tenant” currently stays. “And now, he and his girlfriend live there. He’s on social security, and she works at Home Depot.”

On the Nextdoor app, over 20 homeowners in my mid-city area were experiencing the same thing Anderson says she is going through with her tenant. The most extensive advice the Nextdoor neighbors have for one another is to hire a lawyer. A Kensington resident added “The Covid-related eviction moratoriums still are in effect. The practical way may be best: pay them to move, it’s called ‘cash for keys.'”

A former social services employee posted “We tried to teach those who were struggling to contact the homeowner or the electric company and try to make arrangements. You can’t just stop paying and make no effort. When the pandemic started, people were whining before the next month’s rent was due – those people were a warning sign of the problem to come. Many are taking advantage – some people never made an effort to work. Let’s hope we can help the honest folks who are trying.”

Jess Harmon, 33, and her boyfriend were honest when their Mission Bay landlord said they needed to vacate in 60 days in April. Unlike many San Diegans who’ve reportedly pulled the “eviction moratorium” reason to overstay when asked to leave, Harmon explained to me on October 30 that “Using the ‘eviction moratorium’ wasn’t even a consideration, honestly. My partner and I were fortunate enough to both keep our jobs during the entire pandemic, so we paid in full and on time every month. So when we were told in April that our landlord would need the place back to let her son and his family move in, we understood. It was a valid reason.

“But, don’t get me wrong, it was devastating, and the news couldn’t have come at a worse time. We were both working a lot of extra hours to make up for staff shortages at our jobs and dealing with angry clients due to stock and supply chain interruptions completely out of our control. I was already physically and mentally exhausted, and now I have to find a place to live? And pack ten years’ worth of belongings? And move it to an unknown location in the height of summer? During an international pandemic? And there’s a 60-day deadline? Just…. so exhausting.”

During summertime, Harmon, who is a graphic designer by trade, would spend her free time online for hours seeking a new place for her and her partner to live.

“If I found something that looked decent and within our range, I’d immediately reach out to the affiliated property management company, and I got the same response over and over again: ‘I’m so sorry, but we just rented that out. We need to take the post down.’ Most of these places had been listed less than 48 hours. I also had to sift through dozens of scams, especially on Craigslist and Facebook.”

Then, Harmon spotted a Serra Mesa home on the Zillow app with only two photos. Harmon continued, “It’s not the norm: one was a photo of the front door, and the other was a bird’s eye screenshot from Google Earth. The listing was in all caps and very specific. This person wasn’t working with a rental company …. perfect! I called her, and we spoke for a while. I let her know our situation and our timeline. I let her know we would promise to take care of the home and that my partner is an avid gardener, so we are looking for a place with lots of space for outdoor pots, which this had. She seemed interested, but we still had a month and a half to go until her current tenants were leaving.”

Around this time, Anderson had lawyered up and sought advice on evicting her tenant while simultaneously solely running her Bonnie Jean’s Soul Food restaurant on 54th street by the Valencia Park/Malcolm X Library south of the 94. Anderson’s niece found a law firm in Arizona. “Their rate was okay, and they’re the ones that told me later that they [tenants] have to pay 25 percent. And we were supposed to go to court. So I paid $2,000 for legal advice.”

I spoke to Ash Yousif, a Southern California real estate investor, on November 1. “Even if the city and county say you’re able to evict them, or you’re able to get them out of the unit whether they’re paying rent or not paying rent, you need to speak with an attorney. The laws are continually changing. The moratorium was extended numerous times in the last 18 months; city and county moratoriums differ. In general, you as a landlord working with an attorney will have to work with the tenant to receive 25 percent from them and 75 percent from the state.”

Back in Mission Beach, Harmon and her boyfriend spent their extra money on rental applications. They didn’t hold their breath on the three-bedroom and two-bath Serra Mesa property we spoke about earlier. But as the couples’ 60-day-vacate deadline neared, Harmon panicked. “Where are we going to go? If we refuse to leave, how does that affect my landlord and her son and his family? Our parents have spare rooms, but they live out of state, and we can’t miss work, what do we do? Lots of anxiety and sleepless nights during an already stressful time. I was at work one day when the woman in Serra Mesa called and told me she was showing the house the next day and I could come to see it at 11:00 a.m.”

“Thankfully my employer understood the urgency, so I was able to leave during work hours, but not everyone looking for rentals has this option. It was a perfect fit and exactly what we were hoping for, but I knew I was just one of eight other tours she had that day. As I was leaving, I saw a family drive up to tour, and they seemed really nice. I tried to stay hopeful but was also realistic that we may not be the most qualified.” So as a backup plan, Harmon brought her partner back to meet with the renter to see the place. “She called the next day and told us that because of our interest in gardening, she’d happily rent to us. This was such great news and a huge weight off of our shoulders.”

As this story goes to print, Anderson’s situation has gotten worse. “And now they called the inspectors over and said that I didn’t do a permit. And they’re talking about fining me.”

Many people on the Nextdoor app asked, “Why don’t these people sell their properties?” Yousif responded, “That’s another problem. If you have a tenant that’s not paying, and you want to sell the property, you’re going to have to sell it at a way discounted price or like a fire sale to get out of it. Because nobody wants to touch it. It’s like radioactive.”

Yousif explained, “When you buy a property, you need your home appraisal, inspection, and all that stuff. And then, sometimes, the tenants don’t let them do anything. So then, to buy it without appraisal and inspection leaves the buyer with a cash offer option, which is low. So they’re gonna have to buy cheap because they have to wait it out until they can get the tenant out, and no one knows when that’s going to be, right?”

Harmon and her boyfriend weathered their ordeal and explained through their recent moving experience why many San Diegans are not vacating their rentals at all cost. “My heart goes out to anyone going through their similar struggle right now. Packing and physically moving came with its own set of struggles, but at least we had a plan. I truly have no idea what we would have done if we didn’t luck out and find this place. We are both hard-working, employed individuals with decent credit and clean background checks, and it was still nearly impossible. My health was genuinely affected by stress during this time, and I consider my situation to be one of the luckier ones.”