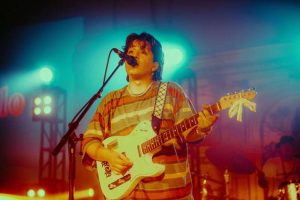 “I think people appreciate it that I’m singing in Spanish because I didn’t use to.” Submitted photo

By Mike Madriaga
Bedroom pop fans can post a thank-you emoji to the algorithmic cupids of YouTube for reuniting Boy Pablo and Cuco at the Shrine Auditorium & Expo Hall on Monday, Nov. 1.

The act released two EPs from 2017-18 — “Roy Pablo” and “Soy Pablo” — and neither contained Spanish lyrics.

“So, what I really wanted to do was write something in Spanish.”

In late 2020, Muñoz and his bandmates released “Wachito Rico,” their first full-length LP, a collection of romantic songs — and a mustache jam.

The title track and “Mustache” are whimsical songs showcasing Muñoz’s Chilean roots with Spanish and English verses that he harmonized over his bandmates’ upbeat instrumentals.

Then there’s “Te Vas // Don’t Go,” a somber song about Rico, a character he developed for the album and its videos. Heartbroken, Rico pleads with his girl, “Te vas, ¿por qué te vas? (“You’re leaving, why are you leaving?”)

“I’ve been speaking Spanish since I was a little kid,” Muñoz said.

“I speak Spanish with my parents.”

Muñoz’s parents emigrated from Chile in the late ’80s. “My dad used to play a lot in church back home in Chile. He was one of the best guitarists and a choir leader. And he knew how to play multiple instruments.” 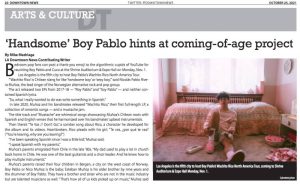 The original story was published in the Los Angeles Downtown News on October 25, 2021.

Muñoz’s parents raised their four children in Bergen, a city on the west coast of Norway. Boy Pablo or Nico Muñoz is the baby; Esteban Muñoz is his older brother by nine years and the drummer of Boy Pablo. They have a brother and sister who are not in the music industry but are talented musicians as well. “That’s how all of us kids picked up on music,” Muñoz said proudly of their father’s influence.

Muñoz is a 22-year-old multi-instrumentalist artist who is also fluent in Norwegian and English. “I think people appreciate it that I’m singing in Spanish because I didn’t use to. I was in the UK a couple of weeks ago playing some shows, and when we played ‘Wachito Rico,’ everybody knew every lyric. It was amazing, actually!”

And what about the 27-second instrumental “Vamos A La Playa (Let’s Go to the Beach)” track?

“My brother-in-law, who was the producer, was like, ‘We should have like an introduction to ‘Wachito Rico,’ something that starts slow then speeds up.’ So I wanted it to be a part of the song, but like everyone I asked said, ‘You should keep ‘Wachito Rico’ by itself.’ So I had to call the track something, and it was really random. ‘OK’ — ‘Vamos A La Playa.’

“Spontaneity has worked for me until now, I guess.”

“He said, ‘Can we just make a music video? Just like anything really.’ And that was with my friends at school. And we were like, ‘Why not? We’ll just do it right now.’ And it’s literally him (Enzo) with like a camera — I think it cost like $200 from the airport — and it’s him walking around trying to find a good spot to film from.”

Muñoz and his then-fellow schoolmates from Kongshaug Musikkgymnas (Kongshaug Upper Secondary School of Music) are depicted playing music on the island of Lepsøya atop a cement walkway jutting out from a small bay southeast of the North Sea.

In some clips, the Norwegian teens appeared dazed as they gazed into Enzo’s camera while he zoomed in and panned from a nearby and elevated bridge.

The nearly 3-minute video was uploaded on Enzo’s 777TV YouTube page on May 19, 2017. “For like four to five months, it didn’t get any attention,” Muñoz recounted. “It was just my friends digging it and family saying it was cool. I got a couple of thousand views.” Then, the YouTube algorithm system did its magic. 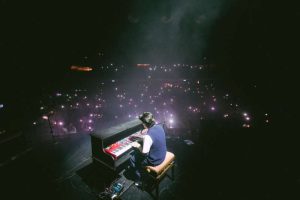 “I don’t know a lot about algorithms, but what I do know when you search up a certain kind of thing on the internet, the internet just like feeds you with the same or similar things. And when people started listening to like Cuco, Clairo, like these kinds of artists that were similar to me, my video kept coming up on the recommended videos, like on the side of what they (viewers) were watching. Then suddenly it was everywhere. Everybody was listening to that kind of music back then, and ‘Everytime’ was everywhere.”

Like Boy Pablo, Clairo and Cuco created some of their alternative rock and alternative pop music from the confines of their bedrooms. Hence the genreless “bedroom pop” term associated with their music and why the corresponding thumbnails would show up as recommended videos on the side of one another’s viral YouTube videos.

“I’m an independent artist still,” Muñoz continued. “So everything I do is organic. Regarding being a romantic singer, my native language is Norwegian, and the lyrics I’ve been listening to growing up are like love lyrics in English. The Beatles sang like literally only about love, and I listen to Blink-182 and they also sing about love, so it was natural for me to just write about love when I started writing in English, and it was the thing that came the most natural and easiest to me when I started writing.”

The dreamy “I <3 You” music video — which depicts Muñoz playing on a piano in a “Sound Of Music”-like scene and him being lovey-dovey with a girl — appears legit. 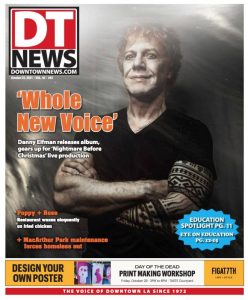 The original story was published in the Los Angeles Downtown News on October 25, 2021.

“Elizabeth: She’s the girl from the music video,” Muñoz said. “I met Elizabeth when I was like 4. We went to the same kindergarten, and then the same (elementary and middle) school, and then the same high school.” The two began dating when Muñoz was 15 years old and Elizabeth was 16 years old, and despite her now attending college and him being on tour, the two are still together.

“My music may not be too profound, like deep,” he said.

“But, to me, it’s always been about the instrumentals and melodies. So, I tried to keep it more simple, more about the music.”

The “Everytime” music video has garnered 40.6 million views and counting, Muñoz hinted of a coming of age on his new project.

“With the new stuff I’m writing, I’m trying to work on my lyrics and try to hit other themes, like maybe growing up or like things that are more related to society,” he said.