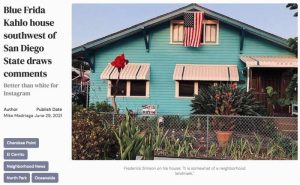 The original story was published in the print edition of the San Diego Reader on June 29, 2021.

A day or so before June 24, an anonymous person living by the El Cerrito neighborhood enclosed a hand-written letter in an envelope that read “Why?” and “my gosh …. how sad,” — poking fun at the owner of a “bright Frida Kahlo blue color” painted home.

On June 24, the owner of the blue-colored home posted an online photo of the “hateful” mail-piece and captioned the photo “My choice, my house, and my colors!!!!!” In less than 24 hours, the “feeling blue” post garnered 128 comments. While 95 percent of comments were of neighbors sympathizing and empathizing for the owner of the blue-colored home located southwest of San Diego State University — a couple said houses in bright colors “bring down” values of its neighboring homes. “Don’t take criticism from someone that can’t say it to your face,” defended a nearby dweller. “I love blue houses!” continued another, “I’ve seen more and more people using various shades of [blue] when updating their homes. Enjoy your lovely new blue home.”

On June 26, I took to our shared NextDoor app, seeking “homeowners that painted their homes in unique colors.” My neighbors from Cherokee Point and North Park, about 3.5 miles southwest of the blue El Cerrito home, responded to my inquiries. 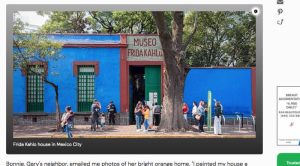 “I love this,” responded Colleen from North Park. “My house is blue/yellow …. we are inspired by the historic tiles at Balboa Park. I also recommend the brightly colored houses at Wightman between Swift and 37th.”

On a quick Google Maps search, I noticed a few blue-colored homes on Whitman between the I-15 and I-805.

Frederick Simson, a Cherokee Point homeowner who with his partner has a turquoise-colored house with an ornate front garden, sent me a direct message. “It is somewhat of a neighborhood landmark. We bought the house in 1993 from an estate sale. It was monochromatic white. Almost every wood-sided home in the neighborhood was white, and every stucco house in the area was tan. Robert and I discussed colors that we both liked, and turquoise and its variants rose to the top of the list.” 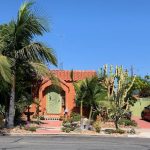 Bonnie: “There were too many white houses on my block in North Park.”

Back across the I-805 overpass in North Park, Ben said he owns a periwinkle house with “creative” highlight colors on Thorn St. “and [with] coordinating murals on the alley side. It’s more toward the purply edge of periwinkle. That’s what’s fun about colors, right!?”

Bonnie, Gary’s neighbor, emailed me photos of her bright orange home. “I painted my house a pumpkin orange with martini green trim for a few different reasons,” Bonnie recounted. “For one, there were too many white houses on my block in North Park. When I moved in 20 years ago, mine was white, too. I’m a firm believer that Spanish houses don’t have to be white, and orange is one of my favorite colors. I have a big garden, so the green blended in.”

Lately, internet influencers utilize colorful homes — as backdrops for their “lewks,” or to complement their “ootd, outfit of the day” — on their Instagram photos or TikTok dance videos. 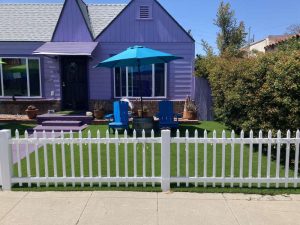 Louis Farris, an owner of a fully customized pink-colored BMW, recently took photos of his vehicle posted up in front of a set of Oceanside bungalows — which were the same color as Bonnie’s home.

“I have on occasion seen people take pictures out front,” continued Bonnie. “When I was going to paint my house and put in a drought-tolerant yard, I did a lot of walking and bike riding in the neighborhood and took a lot of photos of house colors I liked and plants that interested me.”

As most of the interviewees for this article, Bonnie requested that I withhold their exact addresses.

“North Park isn’t very big, so if you just do a little driving, you see some unusual colors, though I think there is still too much white. Then there’s always Burlingame, located between North Park and South Park that not only has some architecturally unusual historic homes, some of which are painted fascinating colors, but all the sidewalks are pink.”

Speaking of pink, last year, John Halcyon metamorphosed his Normal Heights front yard into a flood of fuchsia during “Burn Week” in September; he owns a pink-colored motor home.

“When we decorated our front yard with bright pink fabric and pink-LEDs last summer, I was blown away by the neighborhood support,” Halcyon said to me. “Sometimes it takes a bright-colored house, bright-colored hair, or a bright shining smile to remind us that everyday life can be an artistic celebration.

Halcyon’s neighbors, George and Izzi, DMed me about their homes; George owns a purple house on Mansfield, and Izzi and her husband painted their home a bright orangey-red color with blue trim.

Ash, a real estate investor who’s looking to purchase fixer-uppers in the mid-city area, opines that the aforementioned colorful houses won’t affect the sales and prices of its surrounding neighbors because it’s a buyers’ market. “We will just probably paint over it, anyways.”

“Sure, there were a few disapproving neighbors who are trapped in their status quo mindsets,” Halcyon responded, “but most people would love life to be more colorful and artistic.”