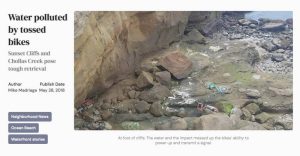 The original story ran in the print edition of the San Diego Reader on May 28, 2018.

On May 21, Paul Proctor pulled up four dockless bikes that were strewn off the Ocean Beach cliffs into the waters.

“That’s a reef shelf at Sunset Cliffs and Hill Street,” Proctor said. “The area the bikes were in is inaccessible without a waist-deep wade around one of the points of the coastline from the south end of No Surf Beach.”

Proctor is a 32-year-old college student, who like his OB neighbors, is tired of seeing dockless/share bikes by their surf.

“I have very heavy-duty ratchet straps with metal hooks on the end,” he said. “I got lucky when I encountered Shawn because he was already down near the bikes looking for sea glass within the rocks. Shawn hooked the end of my straps to the bikes and I pulled the bikes up the cliff.”

Proctor found an additional two bikes later in the day, which weren’t working because the water and the impact when thrown down the cliffs, messed up the bikes’ ability to power up and transmit a signal. When functional, the dockless bikes can be rented and unlocked, by utilizing a smartphone app and between $1 and $2 via credit card.

About 14 miles to the east, Linda Pennington found a “non-native” ofo bike and what appeared to be remnants of a LimeBike submerged in Chollas Creek by Chollas Parkway North and Mina Street.

“We are already removing litter, furniture, abandoned homeless stuff, and grocery carts from our creeks and canyons,” she said, “and now dockless bikes too.”

In the last year-or-so, Pennington and her San Diego Canyonlands team pulled out 8.3 metric tons of trash from their canyons, creeks, and muddy puddles — including bikes and bike parts. 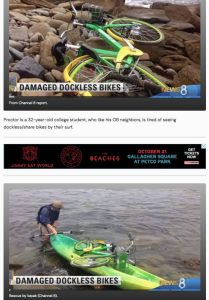 Last month, CBS News 8 reported a LimeBike lying on the rocks below a La Jolla cliff, they then depicted a man that rescued another LimeBike on his kayak.

“There was one that was thrown off the Imperial Beach pier,” said Collin McMahon (a San Diego LimeBike representative) in a different CBS News 8 interview. “Fortunately, it was in shallow water and we were able to retrieve it.”

Paloma Aguirre Bacalski is running for the City of Imperial Beach City Council and boogie-boards around the same pier.

“The health, economic, social, and environmental benefits of dockless bikes, at least in IB,” she said, “outweigh the impact of one or two bikes finding their way into the water.

“LimeBike gave a presentation to IB City council a couple of months ago and reported that 50 percent of rides started or ended within 50 meters of a bus stop. 7,000 ride shares = 7,000 lbs. of CO2 saved, and up to that point, IB residents had collectively burned 400,000 calories.”

About nine miles north from the IB Pier, the City of Coronado is not as welcoming to the colorful bikes. In March, the city began to impound the bikes and charge the companies $45 per unit. On May 24, there were about 250 share bikes cited for being left out and many were next to the water. Janine Zuñiga, from the city of Coronado, couldn’t confirm that any were immersed inside the water, she did although confirm that “right now in our public service yard, we have 41 LimeBikes and two Mobikes — which is a decrease from a couple of weeks ago.”

Proctor doesn’t charge the companies to return the dockless bikes on the streets, yet.

“I have reached out to Mobike about where to return the four damaged bikes with five emails, and I have not received any response back.

“I was able to visit a LimeBike station in Barrio Logan. They expressed some anger that the bikes had been damaged but they also confirmed that their street-team will not go down to retrieve bikes thrown off the cliffs or any other location where the bikes are not directly accessible, like underwater.”