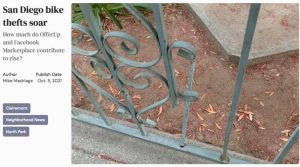 The original story was published in the print edition of the San Diego Reader on October 5, 2021.

The nonprofit organization’s website and app that Hance and Seth Herr launched in 2013 now contain over 688,000 cataloged bikes worldwide, tens of thousands of day-to-day searches, and about 1,250 community partners.

“The [reported amount of bikes] stolen in San Diego is a vast underreporting,” Hance said to me on October 2, “and it’s because we haven’t done a ton of effort to get shops, cops, and cycling groups in San Diego to use Bike Index as we have elsewhere.” So lately Hance has been proactive with some of the 1900 members on the Stolen Bike San Diego (SBSD) Facebook page. On October 3, Hance put up a photo on the Facebook page, then captioned it: “Not mine, but posting because it should stand out in the wild. Stolen: Rivendell Betty Foy, serial [number] unknown … your daily reminder to register your serials.”

The seafoam-blue-colored women’s bike Hance posted about was reportedly released in 2009 and sold for more than $2,200 new.

“UPDATE: it was seen an hour ago heading south on Florida Avenue from University Avenue in North Park, towards Balboa Park,” responded the bike owner shortly after Hance’s online post. “It has two flat tires.”

Then on September 21, nearby where someone lifted the Betty Foy bike, a $1,500 bike was spotted secured to a wrought-iron fence with a u-lock device. This time around, the perp cut one of the metal bars on the fence, slid the u-lock and bicycle out simultaneously, and walked the bike out of the gated complex. Someone “posted the bike on Offer Up about six hours ago,” said the victim on the SBSD forum. “I messaged the seller, but I’m afraid they might recognize me from casing my apartment. If anyone can help, feel free to private message me.”

The victim updated the SBSD subscribers shortly after, saying the San Diego Police Department accompanied her to meet with the seller. “The guy said he [initially] purchased my bike off of OfferUp for $200 and had ‘no idea’ my bike was stolen, even though he advertised the bike as valued at $1800. I proved it was mine when I recited the serial number from memory.”

Jay S. is an avid cyclist from Chula Vista. He has sold on OfferUp for four years and has over 75 perfect-five-star ratings based on items as described, friendly, on time, communicative and reliable.

To sell: “First, I upload a photo of the bike, find the category, and add a description and price. Now there’s an option to ship it, which I never use. Then I post it and wait.” To buy: “They click on the bike, then there are two buttons that say something like, ‘Buy it now’ or ‘ask questions.’ The main question reads like, ‘Is this available?'”

Jay said that he has to click ‘sold’ on the interface to freely communicate physical addresses, email addresses, and phone numbers with the potential buyer.

“If you do not click ‘sold’ and try to send addresses and phone numbers and email info, the bot will step in, remove the message and replace it with a “message removed for protection” pop up. So basically, you have to click ‘sold’ to move forward. They want you to sell and buy with their protocol in place, to protect us. To be honest, OfferUp is popular because it is free, with no fees, and [the interface] is easy to learn.” (Sellers have an option to pay a fee on the interface to be higher on the searches.)

OfferUp, the self-proclaimed “largest mobile marketplace in the U.S.,” states that, “Any item that is illegal or that encourages illegal activity is not allowed. [This is] including but not limited to: stolen or found good[s] ….” There’s a page on the site titled “How to report an item” followed by “See an item that you don’t think should be on OfferUp? Report it.”

But Hance says that the victims, who have registered their stolen bikes onto his website, have repeatedly reported sellers on the site with stolen goods, and the same sellers “continue to have an active OfferUp profile.” Cyclists on the Reddit website from around the U.S. shared similar stories.

Jay says OfferUp has been good to him. “Even with the flakes, I am doing OK. Although I do empathize with the bike-theft victims and will give them a tip: On the selling apps and websites, look in other areas like ‘Collectibles and Art’ under ‘Antiques’ or ‘General,’ because I see bikes purposely listed in wrong categories.”

Hance and Jay read about another bike accident and theft incident “in Tecolote Canyon” by the 52 and I-5 freeways. The incident was posted on the SBSD Facebook page but was later deleted; it was also posted on GoFundMe.com by Adam Palmisano on September 15. “Gabriel went bike riding a couple [of] days ago on a trail in San Diego. He just bought the bike the day before and was extremely excited to go out and ride it, but then he crashed his bike and went unconscious and is in the hospital right now as we speak. He has not wak[en] up yet. Someone found him completely unconscious for an unknown amount of time, and his bike was gone. Please help his family and him recover and hopefully pay for medical bills down the road please. Out of the kindness of your heart, help this family [as] he is the hardest working person I know and the only one that can support his family. He is a loving father of three kids.”

On September 24, I reached out to Palmisano on Facebook for an update, and he responded with only, “[His] bike was actually found at the police station last Wednesday.”

“These thieves are always the ones we want to go after,” Hance said, “i.e., when bikes are taken while the rider was unconscious or had to leave in an ambulance. There’s nothing lower than stealing a bike from somebody who just got taken away in an ambulance.”

“Regarding these huge upticks we saw starting in 2020, we attribute to four factors,” Hance explains. “One, lots of deprioritization of smaller crimes by law enforcement, because of covid restrictions, staffing cuts, etc. — that meant cops weren’t/aren’t able to handle things as low level as ‘stolen bikes.’ Two, the massive rise of online platform sales like OfferUp and Facebook Marketplace to fence stolen goods. Three, the general economic problems caused by covid that spiked crimes like theft. And four, the overall value and need for bikes shot through the roof, so bikes are just worth more in general and secondary markets.

Hance ultimately ties the increase in bike theft to covid. “Remember how every bike shop sold out in early 2020 because people were stuck at home and nobody ever wanted to, say, get on a public bus again? And then there were all the supply chain problems so that shops couldn’t get bikes or parts. So that made the resale market for bikes explode, and all these thieves have nice convenient, anonymous online platforms like OfferUp to unload all their stolen goods with zero risk, so the whole equation meant that more bikes were getting stolen. And those bikes that were being stolen and resold were now worth more.”