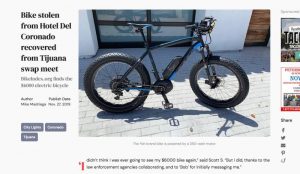 The original story was published in the print edition of the San Diego Reader on November 27, 2019.

I didn’t think I was ever going to see my $6000 bike again,” said Scott S. “But I did, thanks to the law enforcement agencies collaborating, and to ‘Bob’ for initially messaging me.”

At 2 am on September 29, Scott, who resides in both Coronado and Scottsdale, Arizona, noticed the text messages on his phone. “I couldn’t believe what I was seeing.”

“He works in San Diego, but lives in Tijuana,” Scott said. “I tried offering him some money for finding my bike, but he said: ‘No, I can’t take your money.’”

“What kind of bike is it?” I asked Scott.

In 2015, a reviewer from ElectricBikeReview.com said that the LEBOWSKe was “the best fat style electric bike I’ve ridden to date. I mean that in terms of frame construction, component quality, drive system power and efficiency, balance, and overall performance…. It’s also the most expensive.”

Scott’s black and blue colored bike — the model has since been discontinued — weighs about 48 pounds. It’s powered by a Bosch Centerdrive 350-watt motor and has 26-inch knobby tires that can ride in sand and snow.

“When I saw the photos of my bike at the Tijuana swap meet,” Scott continued, “it looked so out of place.”

In the incriminating photos, the stolen bike was surrounded by about 30 other bikes on the side of the street; some bikes were hanging on the canopy frame about six feet in the air.

“How much were they selling your bike for?” I asked Scott.

The bike, which was originally purchased at Holland’s Bicycles in Coronado, was stolen on August 20. It was locked onto a fence near the Windsor Cottage of the Hotel Del Coronado.

“I think that on September 6th, the bike was registered as stolen [on our site],” said Bryan Hance of BikeIndex.org. “We have registered 97 stolen bikes in the San Diego area in 2019.”

Hance, 43, from Portland, Oregon, is the co-founder of the “bike registry that gives everyone the ability to register and recover bicycles.” The non-profit site, where all monies donated go toward their servers and staff, says that they are the “most widely used and successful bicycle registration service in the world, with over 286,000 cataloged bikes, 850 community partners, and tens of thousands of daily searches ….. [It’s] a database used and searched by individuals, bike shops, police departments, and other apps.” 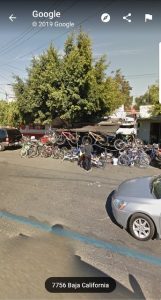 The bike was found at this part of the swap meet.

Hance copied and pasted me the message sent to Scott on September 29, it reads: “Hi think I saw your bike on a swap meet place in Tijuana, was very weird for me to find an awesome bike in that kinda place, I got the feeling that it was stolen so I toke (sic) some pics already send it to your phone number I hope it [is] your stolen bike.”

“That text was from the email that was sent through Scott’s Bike Index listing,” Hance explained. “When someone clicks the ‘message this bike’s owner’ button on a Bike Index stolen bike listing, we see the emails.”

“And that’s how Bob found me,” Scott said, “my phone number and email were on the Bike Index — but his emails to me went into my junk box, so it’s good he texted me as well.

(Scott requested that I change the tipster’s name to “Bob.”)
“Bob warned me, and said if I was going to pick up the bike, to bring some people, because it was not in the safest part of town.”

After double-checking with Holland’s, where Scott’s wife originally purchased the bike for Scott as a gift, Scott was able to obtain the correct serial number. He then called the police officer back and, “they said it was a match.”

“Note that this bike was recovered without a serial number on file on our database,” Hance said, “on account of it being a unique ride with special characteristics — that’s pretty special: a $6000 bike with no serial on file.”

Hance says that their bike index coordinates with bike stores around the world. “The pre-registration thing is one of our biggest advantages,” he said. “We’re the first folks to do registration at the point of sale: so a bike shop can just click a button and register your bike with Bike Index right when they’re selling it to you, or if they are doing maintenance.”

“On Sunday [September 29], I contacted [Bob] directly and spoke with him,” Detective Amy Beebe said. “He was very friendly and also a cyclist, so he knew that bike shouldn’t have been there. He sent Scott the Google map location where he had seen it — it was pretty close over the border.”

Beebe, from the Coronado Police Department, then reached out to the San Diego Police Department’s liaison team that works with the police department in Tijuana. “They work together in terms of interviewing people and recovering stolen property,” Beebe continued, “so I worked back and forth playing telephone with Scott and with the SDPD detective — it took a few hours, but we ended up finding his bike.”

“At this point, I was panicking,” Scott said. “I mean, time was of the essence — what if the bike had sold, or the guy at the swap meet closed shop. I was almost going to tell Bob: You have to trust me, I will pay you the $1500 if you can pick up my bike, and give you a reward.’”

“Usually when bikes are stolen we don’t get this type of really great tip,” Beebe continued, “and we don’t get these people that are willing to work with us, in both Mexico or the U.S.

“I got notified by the [San Diego] detective that the police in Tijuana had picked up the bicycle but they couldn’t bring it to the border [because] they didn’t have a truck [at the time on Sunday afternoon], so the truck [delivery] was going to happen the next day, and that’s why we couldn’t get it on Sunday.” 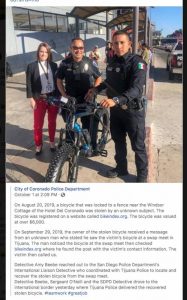 This photo from a Facebook post shows Det. Beebe, Sgt. O’Neill, and the assisting Tijuana police officer when the bike was returned.

“Bob said that the swapmeet was a couple blocks away from the TJ police station,” Scott said.

“I don’t know if they arrested anybody or detained anybody,” Beebe said, “but I do know they got the bike that afternoon into their station and then the following day I coordinated with the liaison from SDPD, and Sgt. O’Neill, me, and the liaison went down to San Ysidro where the pedestrian walk-in is.”

“I did not really calm down until Detective Amy sent me the picture of Sgt. O’Neill walking my bike at the border on Monday afternoon.

Beebe said that the photo was taken at around 4:30 pm.

“Was that at the borderline, or were you guys in Mexico?” I asked Beebe.

“I’m not familiar with this area,” she responded, “I guess it’s called ‘no man’s land’ where …. it’s not really both jurisdictions, but both kind of operate in that area.”

On October 1, the Coronado Police Department posted a photo of Beebe, Sgt. O’Neill, the assisting-police officer from Tijuana, and the recovered $6000 bike.

“It’s like the immaculate reception of the Pittsburgh Steelers against the Oakland Raiders [in 1972],” Scott says. “Everything had to go perfect.”

Not all stolen bikes that make it across the border, have happy endings. “This is one of only three cross-border bikes I can recall,” Hance said. “The ones that come to mind right now wound up in Mexico City and there’s also one that went from San Francisco to Guadalajara.”

On Hance’s site, under the Blog section, a visitor can track back to 2013 on updates of stolen bikes.

“This is another one that got away, but, man, it’s an interesting story,” says one of the 2017 blogs. “[I] didn’t stop looking for it, [I] checked several sites like Craigslist and eBay …. I finally traced [my 2017 Cannondale Slate bike] back to Mexico City where it was being sold thru an e-marketplace like eBay called MercadoLibre. In my case, the distance traveled was 1800 km. (1125 mi.), my bike was stolen in a border town with El Paso TX: [at] Juarez, you might have heard of it before. They didn’t remove anything, the Look pedals, Zipp seat post, Zipp bar, cadence sensor, Garmin tail light…. And while it’s possible for anyone to buy the same bike, it is highly unlikely that someone would choose the very same things I did. If they would’ve installed other brands or unbranded parts and removed the stuff that usually doesn’t come with a bike, like the pedals, or lights…. but that is how they took it from a house they broke into.”

Then in 2015, the bike index site reposted another updated blog. “This bike was stolen in San Francisco, and then bought from an online marketplace, Segundamano.mx” — secondhand.mx — “over 1900 miles away in Guadalajara, Mexico. The owner confirmed the bike was a match, but the sheer costs and logistics of getting it back made doing so impossible. In the end, they bequeathed the bike to its new owner, and the bike was delisted from the Bike Index.” 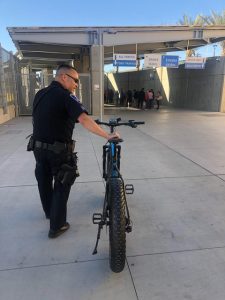 Sgt. O’Neill returning the bike to the U.S.

Despite Hance living in Portland, he’s quite familiar with San Diego and northern Baja, because he travels to Ensenada quite a bit for his day job as a systems engineer.

“San Diego isn’t numerically high on our list right now, because we don’t have a huge presence there,” he said, “but I can tell you that pretty much every city we deal with — especially West Coast cities — have a pretty terrible and rampant bike theft problem. By nature of our prior work, we’re stronger in places like San Francisco and Seattle, and Portland, and we’ll easily clock ten-plus bikes a day in those cities. So that’s $10k to $15k in bikes being stolen daily, which is a conservative estimate. It’s generally because there’s such a hot resale market for stolen bikes, combined with drugs/meth, and combined with lax enforcement.”

On August 20, at around 7 pm, Scott locked up his bike with a “high dollar” chain combination lock at the “Del Members’ bike station.” [Then] the police believe the thieves ‘bounced’ the lock open,” he said. “I ran into another guy the day after mine was stolen at Holland’s, and his fat tire bike was also stolen that same night around the same area.”

“What are the best locks or advice you can give our readers?” I asked Hance.

“Regarding locks,” he replied, “we don’t really advocate for one particular brand but we advocate to: never ever use cable locks; never ever assume your building/workplace/gym’s “safe bike parking” is indeed safe — since we see robberies from there all the time; same with your own garages, where we also see lots of bike theft happening because people let their guards down; never assume any building with security cameras will give you that footage if your bike gets stolen. I typically advocate the use of two locks, and there’s some more locking strategy info on our site. Then, of course, register your bike with Bike Index before it is stolen.”