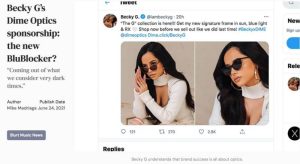 The original story was published in the print edition of the San Diego Reader on June 24, 2021

The original story was published in the print edition of the San Diego Reader on June 24, 2021[/caption]Throughout the month of June, pop-rapper and reggaeton songstress Becky G has tweeted and TikTokked while “drippin’” with Dime Optics, the sunglass/eyeglass brand she signed on with during the pandemic.

Some ‘90s hip-hop heads say the brand’s move strikes them as a post-millennial remix of BluBlocker sunglasses’ marketing initiative, which aired when TV commercial stars were the big deal influencers. Let’s rewind to ‘92-’93, when a BluBlocker hypeman showed up in a commercial to hit up rapper MC Dr. Geek on Venice Beach. Dr. Geek — real name, Wilbur Johnson — wasn’t a professional actor, but he was a performer, en route to his spot on the boardwalk where he’d rap for gratuities. If you check out the YouTube video of the original commercial, you can decide whether or not it appears spontaneous as the rep hands Dr. Geek a pair of the affordable, NASA-inspired sunglasses and the ‘wordologist’ presses the play button on his boombox and rhymes to the beat:

The spot for the UV/blue-light-blocking sunglasses was a hit, airing on national TV throughout the 1990s. Still, it was something of a surprise to find it on YouTube, because when people recorded TV shows on VHS machines back then, they’d hit pause when a commercial appeared. But John Vella, a house music DJ, kept recording and uploaded the informercial to his YouTube in 2007. “He spit[s] better than most of these rappers today,” commented one of the 400K-plus viewers. “That’s for damn sure,” responded another, “and he can do it without writing lyrics on paper. He does it by the top of his head and by heart. He was that talented.” MC Dr. Geek passed away in late 2014.

Fast-forward to June 16, as Becky G — aka Rebbeca Marie Gomez from Inglewood, CA and Jalisco, Mexico — sings, dances, and raps in front of her millions of social media followers, sort of following MC Dr. Geek’s drumbeat. “The G collection is here!” she tweeted. “Get my new signature frame in sun, blue light, and RX [sunglasses emoji]. Shop now before we sell out like we did last time.”

The American Music Awards 2020 winner in the Favorite Latin Female Artist category posted an accompanying photo of herself wearing a revealing turtleneck sweater, large hoop earrings, ripped jeans, and her “affordable” Dime Optics sunglasses ($30-$35 retail). “I think really good things are going to come from this, even though it’s hard to see what that looks like,” the then-23-year-old “sola” singer said in an August 2020 PopSugar interview regarding the pandemic and her then-new sunglasses deal. “As an artist, I’ve been personally inspired, and I think many more incredible artists will be inspired coming out of what we consider very dark times.”

During California’s statewide mandatory lockdown, as the use of phones, laptops, TV screens, and devices increased, Becky G maintained focus. As she mentioned, some of the glasses she reps have blue light technology, which helps you “protect yourself from harmful light emitted from phones/screens/television — don’t fry your eyes. Prevent burnout [and] scroll in peace,” according to the company website.

“Whether it’s in fashion, beauty, music, or film, thinking outside the box is important,” says Becky G, who’ll perform at the Baja Beach Fest on Rosarito Beach on August 22.