Were the crashes at Sycamore Den and Manhattan Club DUIs?

The original story was featured in the print edition of the San Diego Reader on September 6, 2021.

On August 26, a driver of a yellow Kia Rio crashed into a tree in front of Top Gun Wash & Groom on Adams Avenue in Normal Heights.

“I had just crossed the street,” Jonathan Conklin explained to me via DM on September 4. “So, if I were 15 seconds slower in life, I wouldn’t be writing to you.”

Sycamore Den, a bar in between Salon Bordeaux and the Rabbit Hole where Conklin works, captured footage of a dark-grey-colored vehicle on 34th Street approaching Adams Avenue. The driver did not make a complete stop and proceeded eastbound onto Adams. At the same time, the Kia driver was traveling westbound in the 25 mile-per-hour zone. “The [Kia] driver was going about 70 at about 11:20 that night,” Conklin continued. “Since the driver of the [Kia] was going so fast, he didn’t even have a chance to hit the brakes.” The late-model Kia clipped the front end of the grey-colored vehicle then veered onto the opposite lane passing Conklin and five other Sycamore Den patrons sitting on barstools on the sidewalk. The other camera at Sycamore Den captured the Kia careening into the crowd control fences and white-colored vine fences that separated Rabbit Hole’s outdoor-diner customers from traffic earlier.

The roughly 2,500-lb. subcompact vehicle continued onto the sidewalk and swiped the storefronts of Nozaru, a ramen-and-sushi bar, and the Ould Sod, an Irish pub. The camera at Top Gun Wash & Groom, a dog grooming business next door to Ould Sod, captured the audio of the impact a second before the car appeared in its frame, barely missing a parked vehicle and plowing into an a-frame business sign and scooter. Finally, it seems, the tree outside of the doggie business helped stop the 138-horsepower, mid-to-late-2010s import from reaching the Normal Heights sign on Adams Avenue and Felton Street. Then there was dead silence; about 18 seconds after, a person ran from behind the car yelling, “Is anyone hurt?” 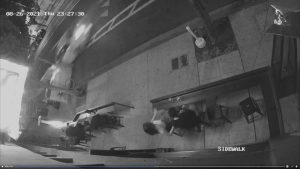 Sycamore Den, a bar in between Salon Bordeaux and The Rabbit Hole, captured footage.

A man — wearing a white tank top, dark-colored pants, and white sneakers — disembarked from the Kia. “Are you okay?” asked somebody else.

“Yeah,” the Kia driver responded as he proceeded past the rear of the vehicle.

The subcompact vehicle continued onto the sidewalk and swiped the storefronts of Nozaru, a ramen-and-sushi bar, and The Ould Sod.
“He stumbled out and was blaming the other driver,” Conklin noted. In the video, the driver returned to the Kia and tried to open the jammed driver-side door. He stuck his head inside the driver’s side open window area to reach into the confines of the vehicle as five people rushed to the driver’s side.

“Looked like he was trying to get back into the car, but the crowd restrained him,” Conklin continued. “The police and emergency medical services/fire were there ASAP. The driver [appeared] impaired [but] the driver refused a sobriety test, so they took him.

On September 2, about ten miles south of Normal Heights, a white BMW crashed into the Manhattan Bar in Chula Vista.

“Everyone is safe, everyone is ok, but yeah, some drunk chick ran a red [light] and decorated our beautiful bar with her Beemer,” posted the bar’s Facebook handler.

On the crash photos of the 63-year-old dive bar, located on Broadway and G Street, about a mile east of I-5, the BMW’s front bumper smashed into part of the exterior stone facade and decimated some studs, drywall, wall panels, and hanging decor.

“So that drunk bitch who ruined our evening last night, busted up our bar pretty bad and broke a few really awesome beer artifacts, including a Pabst mirror I brought from Michigan in 2003,” continued the bar’s Facebook handler on an update post. “Somehow, even though this whole piece of paneling came crashing down, the mirror on it survived. This mirror was a gift from our longest-tenured employee and was/is very special to us. I was so relieved to see it in one piece while cleaning up the mess.” 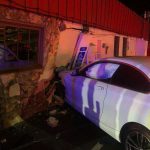 Back up north, Conklin and his neighbors were still picking up the pieces and regrouping. “Adams and 34th needs to be a four-way stop. I don’t know if the city is waiting for someone to actually die, but if that were a Friday or Saturday at 11:30 p.m., there would’ve been quite a few casualties.”