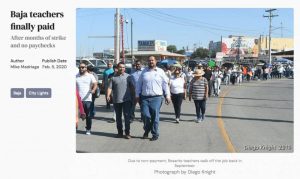 The original story was published in the print edition of the San Diego Reader on February 5, 2020.

“The last time we spoke on September 18, you and your colleagues were striking, and some of the schools down there were closed to the students. What changed?” I asked him on January 7.

“Payments were expedited by the new government,” he responded, “and apparently all of the schools are back in class, not just ours.”

Alexis is a mathematics teacher. He requested that we not use his last name in the article, nor the name of the school at which he teaches in Ensenada. “If you use my name, they might not give me work later on,” he said. He did permit us to publish a photo of his paycheck received from The Ministry of Public Education on August 29 for 1.12 pesos ($.06).

Back then, “many teachers in Baja received checks like this,” he said. “For teachers who were owed 80,000 pesos, these checks were mockeries.”

The school drama began on August 26, the first day of school for the 2019-2020 school year in Northern Baja, when an estimated 36,000 teachers went on strike and school was canceled. During summertime, the state government reportedly had failed to pay 100 million pesos (about $5.2 million USD) to approximately 3000 substitute and interim teachers. Some teachers said they hadn’t been paid since January 2016. “I wasn’t paid for about eight months worth of work. I cannot imagine not getting paid for three years of work,” Alexis said. “And the public says we are lazy for striking, but we have to sustain our families, and we have to eat. We just wanted what was owed to us.”

“So what happened to all of the kids while you guys were on strike?” I asked. 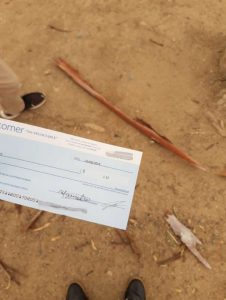 “The first few weeks, the kids stayed at home,” he responded, “while we prepared our lessons at school and met with the other teachers and faculty. It was surreal without children on the school grounds.”

During the strike, there were a reported 688,189 students in schools in the municipalities of Tijuana, Tecate, Rosarito, and Ensenada who remained on summer vacation.

Tijuana resident Pedro Valdez and his wife have two kids in primeria (elementary) school. “This problem with teachers of the public system not getting paid on time is typical of the [previous] state governor’s tenure,” he said.

“And what about the teachers striking, is that common as well?” I asked.

“Not too common,” he responded, “but they do voice their displeasure often, and they keep teaching in spite of not getting paid on time.”

In 2015, Baja teachers took to the streets when a reported 653 million pesos (about $43 million USD) was owed to then current and retired teachers. “Both the federal and state governments have conceded that teachers are owed the money [but] they are at odds over which jurisdiction owes how much,” reported a Reader article titled: “Teachers’ strike holds strong in Baja — Lack of pension payouts the big issue.”

Because of school strikes, many parents in Baja, including Valdez, pulled their kids out of public schools to enroll them in private schools. “It cost me $1500 USD to get both my kids registered at this school they are attending now,” he responded. “Tuition is $120 USD a month, each.”

Baja public schools, Valdez explained, “ask for a donation when you register your kids, but it’s minimal; we are talking less than $20 USD. Books are free in public schools, although uniforms you do have to buy. It’s about a hundred bucks a kid.” 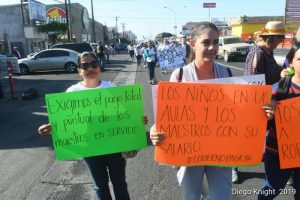 In Rosarito, some of the schools closed down because their teachers were striking in front of the office of Mayor Silvano Barca.
Photo by Diego Knight

The reason teachers went unpaid, Alexis explained, “was corrupt administration in Baja California. [Mexico’s federal government] sent money to our state government’s office twice prior, and it disappeared. The sad thing is: everybody knew. It’s not just our teachers they owed money to, it’s also some of our police officers and government employees.”

(In November, almost 12 thousand retired teachers and state employees in Baja reportedly received their back payments of over 453 million pesos — about $24 million USD.)

In August, the municipality of Mexicali postponed the start date of their school year a week later, due to 110-plus degree temperatures in the desert border town south of El Centro. Teachers there banded with other teachers throughout Baja — including teachers from Tijuana, Rosarito, Ensenada, and Tecate, and demanded their interim and substitute teachers be paid, or else they wouldn’t return to teach classes.

On August 29, an agreement was reportedly made at a meeting between the Ministry of Public Education and the teachers’ unions, but some teachers didn’t go back to work until September 2.

According to an El Universal news article, Esteban Moctezuma Barragán, the secretary of public education, said to the union workers: “Although it is a state problem, the federal government is going to support… the teachers of Baja California so that the [back pay] can be paid tomorrow.”

“The ministry of public education promised to make the payments in three different installments,” Alexis said. “We received the first payments; then the following week we should’ve received our second check; and the week after, our last payment.” 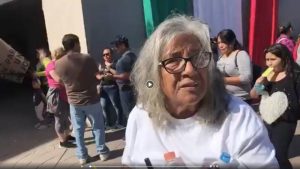 M. Fernandez: “Some of these teachers here haven’t been paid for three years.”
Photo by Infonort Rosarito

Alexis and his co-workers never received their promised second and third payments, and they continued to work from September 2 to September 17. Teachers in other schools continued striking. “There were three other schools in Ensenada that closed,” Alexis said, “and in Tijuana and Mexicali there were more, because many teachers were absent.”

In Rosarito, some of the schools closed down because their teachers were striking in front of the office of Mayor Silvano Barca.

M. Fernandez and her granddaughter were supporting the teachers’ strike on September 12 in Rosarito. “Some of these teachers here haven’t been paid for three years,” she said in an Infonort Rosarito news report. “We all work for money, it’s only fair to pay the teachers. We don’t want our kids to be burros at home. We want them to study.”

Two teachers held up picket signs next to Fernandez. One read: “Our children are harmed because of underpaid teachers — we demand a solution.”

Dozens of picketers, parents, and children surrounded Fernandez and the two teachers; they were all chanting: “Tenemos que les pagan” which translates to “We have to get paid.”

“Things were getting bad,” Alexis said, “until Jaime Bonilla Valdez, the new governor of Baja California assumed office on November 1, 2019.”

According to a Telemundo 20 news report on November 19, 2019: “The Baja California government filed a criminal complaint against former state governor Francisco Vega de Lamadrid and four other officials from the previous administration.” Bonilla reportedly explained, “it has been determined that there was great abuse by outgoing authorities.”

The news report added that the alleged amount missing was more than $61,949,400 USD.

“I wasn’t going to buy gifts this Christmas,” Alexis said, “and when I got my check I went to buy almost everyone gifts. I was so happy. I bought clothes and toys for my girls, and gifts for my parents and siblings.”