“I did not see him until the last second,” said Andy McMillin, “and it was the closest call I had. The fans down there in Baja California stand next to the race course and we call it “the parting of the seas” as our trucks approach a high-traffic spectator area.”

McMillin is based out of Point Loma and is a five-time overall Baja 1000 champion.

“The racers and the spectators know the risks” he said. “These are highly capable vehicles moving at high rates of speed and some people choose to stand right next to the race course to get the ultimate experience of watching us pass by.

McMillin was referring to a near-death-race incident on April 7 that was caught on video. The viral video depicts a man watching about an arm’s length away from McMillin’s trophy truck as he zoomed by going “80-100 miles per hour” at the Baja 250 race. The annual off-road race is managed by SCORE International and this day it was a 320-mile single loop race that started in San Felipe.

On the same day, two other spectators were not as lucky.

“The two people killed by the Herbst truck, was an accident,” said Yolie Stover from Alpine. “If the police would have said they intentionally hit them, they would have not have finished the race, and I guarantee that they would have gone to jail.”

According to the Mexican newspapers “Ed Herbst, trophy truck driver #91, lost control of his vehicle and hit the two spectators, who were identified as Omar Corona Arroyo and Abelardo Padilla Camacho. Both were 38 years old.”

Stover goes by the Off Road Girl Loves Baja moniker. She’s been capturing videos and photos of the off-road action since 1995. “The spectators need to stay back at least 50 feet,” she said. “It’s the spectators’ responsibility to stay safe, keep back, and stay alert.”

At times, she’s out by the race-course blowing her whistle and reminding the spectators to stand back and pick up their trash, but many don’t listen.

“Unfortunately, fans do walk out and drive on to the course during races,” said Matt Scarpuzzi. “Drivers, race officials, and local Mexican police and security all discourage this, but again some of these races are over 1000 miles long and it is impossible to enforce boundaries for every mile.”

Scarpuzzi, 38, is a fireman from Alpine that raced his UTV (utility task vehicle) this day, but broke down at race mile 102 and was not able to repair it to get back in the race.

Scarpuzzi’s wife and two kids were watching the race. As the mother and her daughter stepped away from their area, three trucks rolled into their encampment. “Our son was one of the kids being frantically shuffled away by my good friend,” she said.

“What happened with BJ Baldwin, Robby Gordon and even the eventual winner, Rob MacCachren, was they didn’t get back over to the marked course early enough,” said McMillin. “Rob made it through after zig-zagging around multiple spectators’ vehicles, and lost quite a bit of time. BJ and Robby tried to come back to the marked course and BJ ended up having to go over someone’s e-z up (tent).”

On another video posted from a different angle, a kid could be heard screaming in Spanish.

“Several drivers drove off course and took this access road to be able to drive faster.” Scarpuzzi said. “Once they got to the end of the road they tried to get back on course and thats when BJ decided to drive through the spectator area.”

BJ posted the video on his Facebook and it read in part: “Thank you to those of you that cleared the way for me and allowed me to destroy your chairs, canopies and coolers to access the virtual checkpoint. Send me a direct message proving it was your camp, and I promise to replace them with even better @monsterenergy canopies, chairs and coolers as well as a pallet of drinks to fill them with.”

Scarpuzzi was livid when he saw the post, and responded. “There is no excuse for mowing down a spectator area to get ‘back in course.’ You can keep your Monster Energy e-z up and cooler. My 6-year-old son and 4-year-old daughter that dove under my truck to get out of your way, have no desire to support you or your sponsors. You had a choice to make at that moment, and you chose to endanger human life for a faster line. That is not what desert racing is about.” 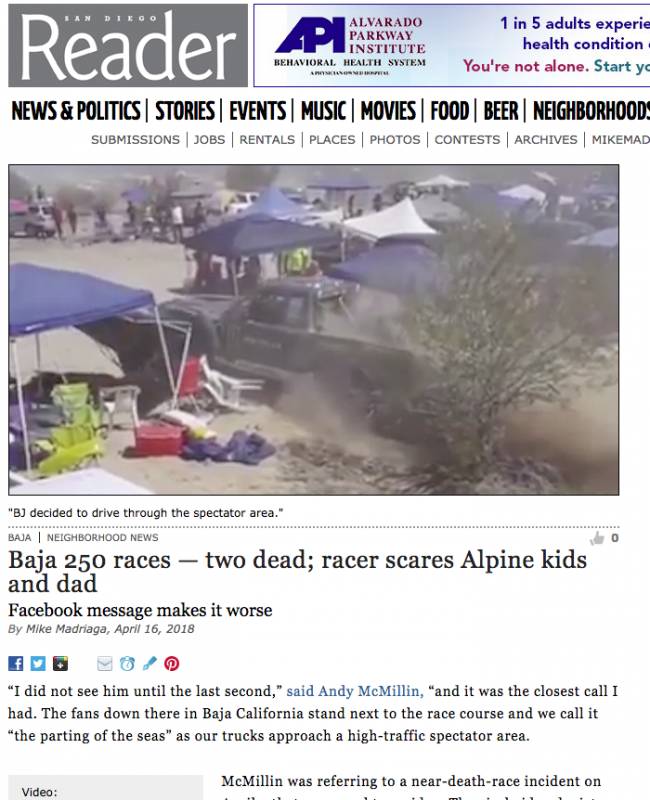 “BJ decided to drive through the spectator area.”