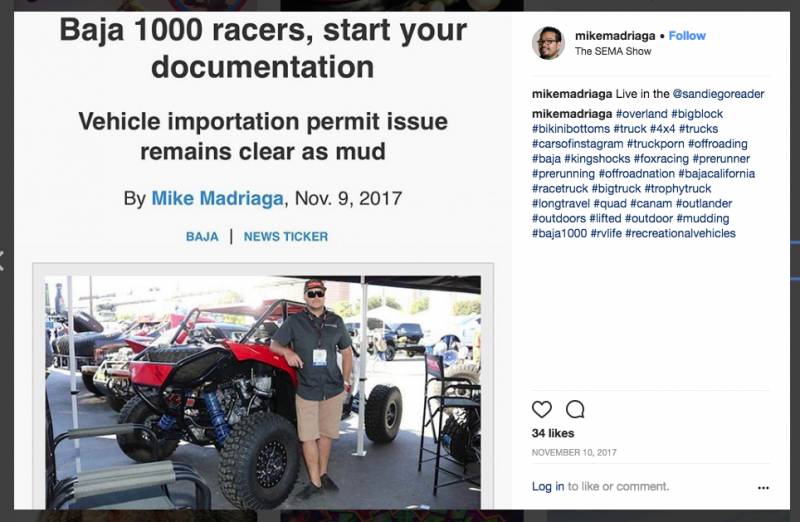 Published in the San Diego Reader magazine on November 9, 2017.

As this story goes live and the Baja 1000 starts in less than a week (November 14–18), there still has been no official press release from the Mexican government regarding the new TIP (temporary import permit) needed by certain vehicles entering into Baja.

“We’ve been asking and still haven’t been able to get anything official in writing,” said Discover Baja marketing director Jennifer Kramer in a November 7 email, “although everyone had confirmed the new [TIP] rules verbally.”

On October 26, I contacted SCORE International’s media operations director Dominic Clark for a quote regarding the new TIP. He forwarded my query to another rep in the company and my email was never answered.

Kramer was quick to reply, though. “Baja used to be a free zone,” she said, “[and] the problem is that it’s no longer a free zone for all types of vehicles. I understand that the ambiguity is frustrating for everyone…. Unfortunately, with multiple aduanas [Mexican customs] and Banjercito [Mexican national bank] officials at the individual borders telling us that there are new requirements for [permits] and many of our customers getting turned away at the border, we can’t in good faith tell everyone that nothing has changed, just because there’s nothing official in writing yet.”

Ryan Edwards will be crossing into Mexico this week with the rest of his Raceline Wheels race team. I interviewed him in Las Vegas last week as he promoted their wheel line at SEMA, the largest automotive aftermarket show in the world.

“We all are worried about [crossing into Mexico through Baja],” he said, “but nowadays it’s something you gotta deal with and if you worry about it too much it’s gonna ruin your trip [and race].”

Edwards has been racing the Baja 1000 for the past 15 years (his team took sixth place in the Pro UTV Class last year). This year he’ll be rolling in with 40 other race vehicles and their huge RVs and trailers — with caution.

“Score International has been informed that the new temporary importation requirements for RVs will not apply for the BFGoodrich 50th Baja 1000, however, they will require that the vehicles be part of a team caravan when they cross the border. Those team vehicles crossing separately must be part of a list that Score International will send to the authorities, which must include: description of vehicle; license plate; name of driver; the date of crossing. This information must be submitted to Marco Durazo (madurazo@hotmail.com) by Thursday, November 9th!”

Although the post further validates the new TIP requirements, it does not excuse other vehicles, RVs, and trailers from requiring the proper permits that are not on the list.

“Sometimes things in Mexico don’t operate as clearly or efficiently as they do in the U.S.,” Kramer said, “and patience needs to be exercised. We’ve been through this same procedure multiple times when the rules have changed for boat [permits], FMM tourist permits, and many other processes for traveling to Baja.”

The new $52 import permits can be purchased through Kramer’s website (plus processing fees) or the Banjercito website or location.

For the travelers with RVs and trailers that are not part of the Baja 1000 team caravan, these are the rules Kramer provided effective immediately when entering into Baja California: Motorhomes not towing anything are able to get a temporary import permit good for ten years. Motorhomes towing vehicles will need to get the ten-year permit on the motorhome and a six-month permit on the vehicle. The vehicle will have to leave the country within six months or the deposit will be forfeited.

Motorhomes towing accessories (for example, trailers that contain motorcycles or jet skis) will only be issued a six-month permit but will not have to make a deposit. Trucks towing fifth wheels and camper trailers will have to get two permits — a six-month permit for the truck and a ten-year permit on the trailer. A deposit will be required for the truck (depending on the value of the vehicle but normally ranges from $200 to $600) but will be refunded when you exit the country and return your permit.

Trucks towing utility trailers or toys do not need to get any permits. All boats longer than 14.7 feet are required to get a ten-year permit.

Kramer’s website also states another law that will affect a lot of visitors and businesses: “A vehicle [that’s not an RV] can no longer tow another vehicle into Mexico (i.e., a truck cannot tow a car into Mexico). If you need to tow another vehicle, we recommend that you have someone drive the second vehicle across the border if possible and then hook up to tow the vehicle once across the border.”