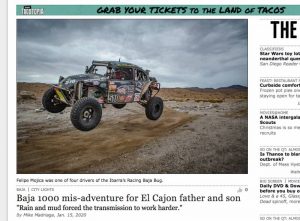 By Mike Madriaga
El Cajon residents Felipe Mojica and his 15-year-old son Gabriel agreed to speak with me before and throughout the six days (November 19-24) they worked on the annual Baja 1000 off-road race.

“The race was postponed 24 hours,” Mojica said at 6 pm on Thursday, November 21. “Instead of it starting tomorrow on Friday, we start on Saturday.”

“It’s better for us, because our teams have more time to prepare,” Gabriel said.

Mojica disagreed, as he was loading up the back of his GMC Denali SUV with blankets, pillows, luggage, and race gear. “It’ll be harder, because parts of the course were damaged by the rain,” he said, “it’s a big mess down there.”

On the way down to Ensenada, Mojica’s phone received a Facebook alert; SCORE International, the sanctioning body for the “most prestigious off-road race in the world,” verified Mojica’s sentiments. “Three days of rain makes significant portion of the… rugged race course impassable,” posted the organization. Above the public service announcement, was a photo depicting a dirt road that caved into a ravine, followed by its repair with a bulldozer and excavator in the same frame. 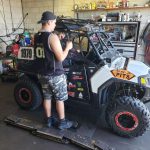 Gabriel: “I’ve been riding co-pilot with my dad in the RZR for three years and I’ve been behind the wheel for like two.”

“My dad’s got this,” said Mojica’s tenth-grade son. “He’s ready, and he did his homework.”

“I’ve been riding co-pilot with my dad in the RZR for three years,” Gabriel said, “and I’ve been behind the wheel for like two.”

This was Mojica’s first time racing in the Baja 1000 loop race. As I spoke on the phone with them, I looked at the course map on the website. The race started at Boulevard Costero where it turns into Carretera Transpeninsular in Ensenada. It then transversed east to Ojos Negros, and went 150 miles south to San Quentin Wash; then northeast past Simpson’s ranch; and then back south to “the dreaded” Matomi Wash at race mile 430.

“This is what everybody fears,” Mojica said. “Last year, the whole race stopped — there was a line of 30 vehicles that were stuck there. Check out this video, Mike.” 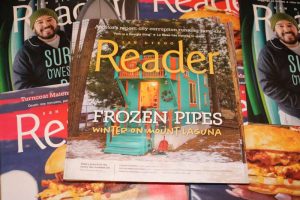 The original story was featured in the print edition of San Diego Reader on January 15, 2020.

It was a video of Mojica and his buddy, Manuel Mayoral, from Rosarito, pre-running through the Matomi Wash two weeks prior. Pre-running is when the racers do practice runs through the racecourse at a much slower pace to study the terrain and take notes.

“Man those rocks are big,” I said as I noticed Mojica weaving through the boulders with his slim-bodied RZR. On another video, trophy trucks didn’t have the option of dodging the boulders here; they had to climb them.

“It’s actually worse, the rocks are way bigger, and it’s way harder to get through in person,” Gabriel said. “Because there’s a lot of loose sand, and if you don’t push the gas just right, you might get stuck.”

The teenager has been preparing to help with this race since he began turning wrenches with his dad in their East County backyard. “In the engine, I can swap a few things,” he said, “and I can change the suspension, it’s not that hard.” 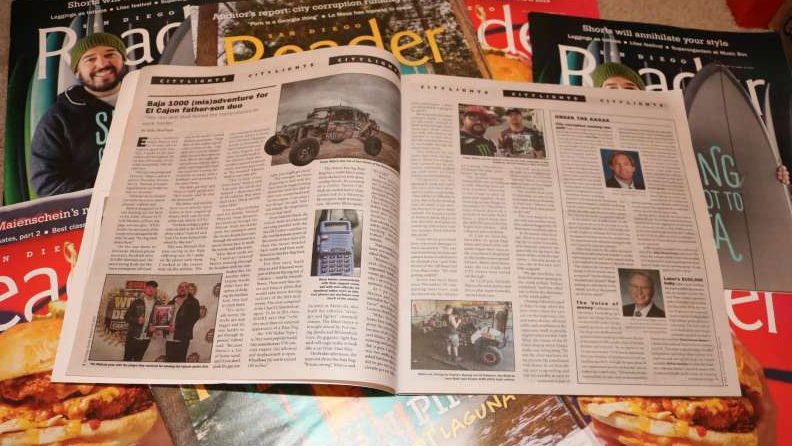 From Matomi Wash, the course went northbound running parallel with the Sea Of Cortez coastline to the northernmost point of the course at race mile 630; then the racers headed back south and then westbound to checker-flag back in Ensenada.

For this race, Mojica and Mayoral were part of Ibarra’s Racing out of Calexico — lead by Gerardo Ibarra. There were four racers and four co-pilots that would take turns driving sections of the 800-mile course. The crew competed in the Class 5 Unlimited category. To be in this class, SCORE says that “vehicles must have an external appearance of a Baja Bug …. the VW Sedan Type 1 is [the] most popular build. Any manufacturer VW concept engine [is] allowed and displacement is open. Wheelbase [is] not to exceed 105 inches.” 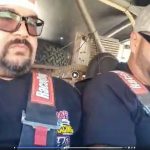 The Ibarra Racing Baja Bug has a matte black paint finish decked out with sponsorship decals. It’s powered by a 2100cc Torete VW-built air-cooled motor that’s connected to a Monstro Motorsport-built transmission. Monstro Motorsport, located in Mexicali, built the vehicle’s “stronger and lighter” chromoly chassis. The lifted stance is brought about by Fox racing shocks and BFGoodrich tires. Its gigantic light bar and roll cage make it look like a car from Mad Max.

“How much did the owner invest in the vehicle,” I asked; “Over $10,000,” Mojica responded, “and he paid to enter the race.” The entrance fee to race in Class 5 was, “$3860 if paid before deadline, and $4060 paid after the 11/11/19 deadline. This includes base entry fee, insurance and safety, land use and taxes, tracking… and administration,” says the SCORE website.

“And yourself, how much have you shelled out?” I asked Mojica.

“Between me and Mayoral, close to $3000,” he responded, “mostly on hotel rooms, gas, and food. That’s why I am trying to find us sponsors. Anything helps.

At 7 pm on Friday, Mojica and his crew attended the “mandatory racer” meeting at Torre Lucerna Hotel Ensenada. 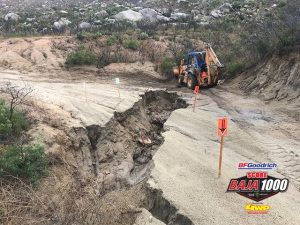 “Mike, there are 400 teams here waiting to hear about the course changes, because of all of this rain,” said Mojica. “All of the pre-running and homework we did, is gone. I saw BJ Baldwin two weeks ago, and I asked him how many miles did he pre-run; he said he already pre-ran eight laps of the entire course — don’t you think that he is going to be upset?”

But in the end, the course changes made it easier for the racers. Instead of them going through Santo Domingo Wash (about race mile 190) where it was flooded in certain areas, SCORE re-routed the racers to cut straight through the town’s main streets.

Also affected by the heavy rains were the spectators. Some San Diegans that camped out by the course reportedly packed up and went to get inside.

“Originally we had planned to camp and watch [the race] at Punta Cabras,” said Z.J. on his social media. “This will be our fifth year in a row. But with the pending rain, we made a last-minute decision to get a motel instead. We found a room at Mission Santa Maria in San Quintin and plan on watching somewhere near San Quintin Wash towards the ocean.” 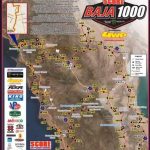 Some reporters here reported damage to their equipment. “The rain was frustrating, because our camera lenses would have to be cleaned a lot,” said Yolie Stover of the Off Road Girl Loves Baja outlet. “We were getting soaked.”

Stover had been there since November 19, conducting interviews and documenting the vehicles pre-running. “The vehicles all looked the same color: brown,” she said.

The weather damage reached all the way up north, affecting some pit crew members returning to San Diego to pick up parts and supplies. Some returning to San Diego on November 21 (Thursday), were slowed down by a section of Avenida Padre Kino — which feeds into the SENTRI lane at the San Ysidro Port of Entry — that collapsed into a sinkhole.

At 3 am on Saturday, November 23, green flag waves and motorcycles and quads began their races as the countdown displayed on the jumbo screen hit zero. About seven hours later, the car, truck, and UTV classes were waved on through.

At 12:25 pm, Gerardo Ibarra, the team leader, and his co-pilot Aaron Gonzales, started their race.

“Our VW can do about 60 mph on a straightaway,” Mojica said to me as he was “chasing” Ibarra, to meet up with the team at Ojos Negros to deliver a spare belt. 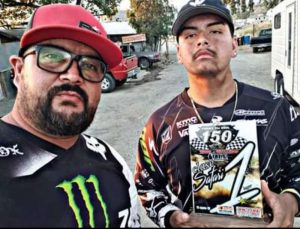 “We couldn’t find a belt in Ensenada, so one of our teammates drove to Rosarito to find one,” Mojica said. “He came back, and passed us the belt.”

The crew keeps in contact with one another via six blue-colored Rugged RH-5R dual-band, handheld radios.

In the team’s video footage, Mojica is seen helping the co-pilot-Gonzales, and Mayoral connects the spare belt via zip ties to the frame of the car by the rear-motor — for easy access, in case one of the race car’s belts snapped.

Chasing is the term used in Baja racing, when the race crews chase the race car via the highways, city, and town streets, off-road paths, and sometimes on the racecourse itself to provide support when needed. Laith Allos, the owner of the El Cajon shop at which Mojica works, was riding along. “He was the chief mechanic for my pit crew. He coordinated with Ibarra to see how the car was responding and was on standby in case we needed some work. Laith specializes in Volkswagens.” 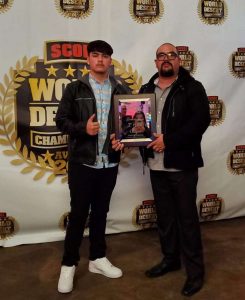 On Saturday, January 11, the Mojicas received their season championship trophy at SCORE’s award night held at the Air and Space Museum.

Mojica’s son Gabriel was riding along, listening to the blue radios, and waiting for instructions from his dad.

“That’s at Morelia Junction,” Mojica continued, “that’s where me and Mayoral will wait for the race car, and my pit crew is going to drive to Rancho Percebu by San Felipe, and wait for us…and, there, we are going to check up on the car, and see if they need gas and change the tires,” Gabriel said. “They have to drive through Matomi Wash, that’s been a dream for my dad.”

By about 5 pm, at race mile 140, southwest of Colonet, their Baja Bug had two flat tires. When Ibarra’s crew replaced them, they noticed a broken axle.

“We were already too far, by Mikes Sky Ranch,” Mojica said, “and we couldn’t do anything but wait.”

Ibarra’s crew swapped out the broken axle and they noticed something was a bit loose in the transmission. Hoping for the best, they pushed forward.

“By race mile 145, the transmission gave up,” Mojica said, “and we didn’t have a spare transmission, we had a spare motor, but unfortunately not a transmission.

“Ibarra’s crew communicated to the Weatherman Relay Team” — the ones that keep chase crews in correspondence with their teams via radio — “to tell SCORE that they were out of the race. So when I called Weatherman to check on them, that’s when I found out the bad news.”

Gabriel took the disappointment hard. “He wanted to see me race,” Mojica said, “and I told him this could’ve happened in race mile one; I’ve seen it happen before. I told him, ‘Son, there are more races to come for us.’”

The team remains optimistic. “We still might win the overall [season title] in the class,” Mojica said, “we were leading in points in our class, and even though we didn’t finish this race, SCORE gave us enough points to stay on top.”

On Saturday, January 11, the Mojicas received their season championship trophy at SCORE’s award night held at the Air and Space Museum 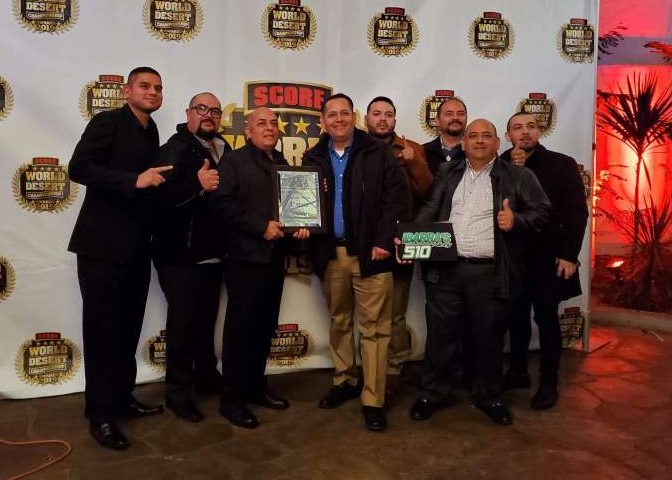