Bait bikes work in Coronado; But would they in San Diego?

“Just letting thieves know that it’s a bait-bike possibility has to have some kind of chilling effect.”

By Mike Madriaga
On January 28, before 10 am, the Coronado Police Department noticed their bait bike moving away from where it was initially locked. So they sent an officer down the Silver Strand near Leyte Road, north of the Coronado Cays, and the officer saw a 49-year-old man riding the bait bicycle heading northbound on the bike path.

“Officers made contact with the subject at the bus stop and placed him under arrest for grand theft, possession of the stolen property, vandalism, and possession of drug paraphernalia,” reads the Coronado Police Department online report. Afterward, the police department drove the bike thief downtown and booked him at the San Diego Central Jail on Front Street.

Just days before Christmas, Coronado police officers found their bait bike and bolt cutters in a large motorhome parked at Soledad Place, a couple of blocks south of the Coronado Ferry Landing. “A 38-year-old man was taken into custody and booked into San Diego County Jail for grand theft and possession of stolen property,” reported the island’s police department.

Coronado’s circa-2014 bait bike program has led to over 100 arrests and counting.
“The only other time I’ve ever heard of a bait-bike program [outside of Coronado] was in Pacific Beach around 2017,” Rick said to me on February 14. “A bait-bike program in San Diego would be good but would need to be set up in areas where bikes are taken the most,” which according to the Stolen Bike San Diego Facebook page, is the North Park area, and the beach areas like Mission Beach, Ocean Beach, and Pacific Beach where Rick works as a bike shop sales rep. “Our shop was broken into in 2020. Two bikes were stolen, and only one was recovered. A homeless man living in the alley spotted it and brought it back to us.”

What does Rick think of Coronado’s program? “Coronado has the bike-bait program dialed because it’s a small community, and they have their own police force,” he responded. 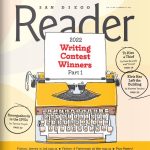 Bryan Hance, one of the co-founders of BikeIndex.org, continued: “Our system works on a location and radius system, so it’s sort of hard to pin down Coronado bike-theft statistics because it’s such a small place and when I search ‘2 miles within 92118’, which is the Coronado zip code, I get about 95 bikes on file total, stolen and reported (since 2013) in our site.” (Many bikes in this search were stolen on the other side of the bay, which is less than two miles from Coronado.)

“I do think that stepping up that kind of bait-bike enforcement does have an effect,” Hance opined. “Just letting thieves know that it’s a bait-bike possibility has to have some kind of chilling effect. But, unfortunately, I just don’t have a study or link sitting right here in front of me that could back this up.”

In 2018, mainstream news reported a 50 percent reduction in bike theft in Coronado, thanks to its program where technicians mount tracking devices within the bicycle frames and accessories. They then park the bait bikes and lock them up throughout the 32.5 square-mile island. The whereabouts signal of the bike is relayed to the police department monitors where they can follow its movements. 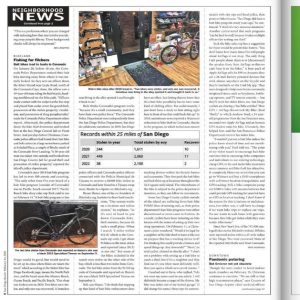 Some San Diego County cyclists outside of the island are suffering from ‘bait-bike FOMO (fear of missing out)’ as their police department’s bait-bike programs were either discontinued or never came to fruition. As a result, cyclists have been tinkering with the notion of setting up their own sting operations on bike forums.

A Clairemont cyclist on February 11 wondered, “Would it be legal for a neighbor of the bike thief to leave a bike out on purpose that has a tracking device in it? I’m thinking this could provide evidence and speed things up. Any downside?”

The last bike stolen from Coronado and reported on Hance’s site on September 5 was a black 2019 Specialized Tarmac.
“Steve,” an avid cyclist, chimed in shortly after. “I don’t see a problem with setting up a bait bike to catch a thief, but if it’s a neighbor and they find out it’s you (they most definitely will), then you open a whole new can of worms….”

Steve paused for a bit during our online interview. “I do not want my name used in any article. I will definitely become a target of the thieves [and] my bike was stolen out of my locked garage.”

I changed his name to Steve for the article.

Steve says he communicates with city reps and local police, then posts on bike forums. “San Diego did have a bait-bike program many years ago,” he continued. “I think it’s very resource-intensive…. It can be hard to staff because it takes multiple officers for netting one thief,” continued a fellow cyclist. 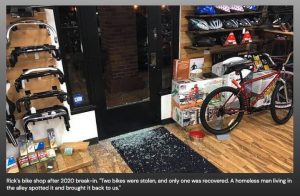 Rick, who sells bikes and accessories from an undisclosed brick-and-mortar store in Pacific Beach, noticed locals speaking of citizen-operated bait-bike stings. “You don’t know how many times I’ve told people about AirTags at our shop,” he said to me on February 14. “The only thing I tell people about them is to [disconnect] the speaker from their AirTags so thieves can’t hear it on the bikes.”

A four-pack of Apple AirTags sells for $99 on Amazon. They are 1.26-inch battery-powered devices that stick onto almost anywhere on the bicycle and are trackable on the Find My app. The sound the AirTags emit was meant to help its users locate commonly misplaced items: keychains, bottlecap openers, and TV remote controls — but not stolen bikes.

San Diego cyclists are sharing the ‘How GPS + AirTags Recovered My Bike (Real Theft)’ YouTube video with one another. It’s a ten-minute-plus video, where Andrew Ford, a 34-year-old programmer from the San Francisco area, mounted two Apple AirTags and an Invoxia GPS tracker on his bike, which helped him and the San Francisco Police Department retrieve his stolen bait-bike.

“I wouldn’t put out a bait bike unless the police know ahead of time and are coordinating with you,” Ford said in a February 13 interview with me. “The point of my video wasn’t to encourage bait-bike exercises but to encourage bike companies and individuals to use existing technology, cheap GPS, to try and make bike recoveries more common and bike theft less attractive.

“It completely blows my mind that you can go to Walmart and buy a $100 smartphone with cell tower location triangulation and GPS tracking. Still, e-bike companies pump out $3000 e-bikes with massive batteries that could provide GPS tracking for years that have no GPS or location tracking. I don’t know if the reason for this is laziness or maliciousness, but either way, it will have to change if we want bike trips to replace car trips. No one wants to walk home with groceries because their bike got stolen while they were inside Albertsons.”

Since New Year’s Eve, of the 747,000 cataloged bikes on the Bike Index website: 38 bikes were reported stolen within a 25-mile radius of San Diego; two were recovered. None of the reported 2022 thefts were from Coronado.