On December 10, Marisol Castillo’s Christmas gift package was swiped from the porch of her Imperial Beach home; this was her last straw.

“We’ve had this situation happen way too many times,” she said on a December 13 interview, “I can’t even count them. My husband Waylon runs an Amazon business so we always have packages come and go. First we got a camera and we thought that would fix it: it didn’t.” 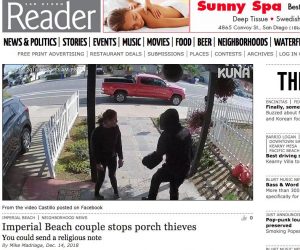 On December 11 Castillo decided to fill an empty Amazon envelope with their dogs’ feces and leave it on the porch for the next thief; her husband Waylon filmed.

“We decided to do a little prank on the people that are stealing,” she said on the video. “We are going to fill it with dog poop and we are going to put a little present there that says “Fuck You!” and “Happy Holidays” and “You piece of shit.”

Shortly after, Castillo posted the four minute video on Facebook; it went semi viral and most of the commenters commended the couple.

“I thought the poop prank package was funny,” said Julian a correctional officer that lives less than a mile away from Castillo. “We, the hard working people of our community, want to let the thieves who victimize us know how we feel about their actions. That is a humorous/non-violent way of doing so, in my opinion. Package thefts in the Imperial Beach area are really bad, especially around the holidays. I have been a victim of a stolen package in the past here in IB.”

On December 12 a guy and a girl wearing black outfits stole the Amazon envelope with poop; the couple caught the thieves on video and posted their photos on Facebook.

“I did report the stolen poop package to the cops,” she said. “They said they would look for the people on the video but couldn’t really prosecute them since it wasn’t a real package.”

Both Julian and Castillo saw a meme posted that says: “To get rid of some junk cluttering your house — pack it in Amazon boxes and leave it on your front step. Merry Christmas, porch pirates.” 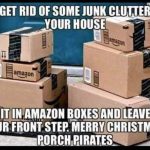 “I don’t think that meme started everything,” Julian said. “People have been [putting] poop in boxes for years now. You can even buy devices online that make loud popping noises to scare off the thieves when they try to pick up the packages. People also put broken items with notes in them for the thieves to read – from venting notes to religious notes. You can get creative as long as you stay lawful. At the end of the day you don’t want to hurt anyone; you just want the thieves to get caught.”

“I don’t know who said revenge was a sweet thing,” Castillo said, “it’s not sweet — it’s nasty and it stinks.”

🎙🎥📝with @whereismarisol for my next @sandiegoreader article. You’ll never guess what she’s putting in an Amazon package for her porch pirates.

Published in the San Diego Reader on December 14, 2018