San Diego police blocked a key street through City College for more than an hour around midday Nov. 16, while an African American alumnus lay on the ground accusing officers of roughly removing him from a class and injuring him.

More than 20 students eventually sat next to the man on the street in solidarity, while officers directed traffic around them. Some appeared to be young people who had walked out of their classes to protest the election of Donald Trump as president.

Police declined to comment on the allegation leveled by the alumnus.

The incident started at approximately 11:30 a.m., as many students appeared shocked to see Royce Allen Green laying in the middle of C Street by the AH Building – alone. 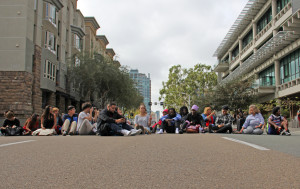 City College students sat next to Green on C Street

“At first he was in the quad area by the MS Building arguing with another man,” said Natalie Elo, a sociology major. “He was talking about police procedure.”

A few minutes later, Elo then noticed a crowd of people on both sides of the street taking photos and video of Green. He was yelling to the crowd and the San Diego Police Department officer that stood about 20 feet away behind him. The officer was blocking and redirecting the traffic away from Green.

Elo was the first student to sit next to Green. They spoke.

“He (Green) said that last Friday in the computer lab, the police pulled him out and wanted him to sit down,” Elo said. “He didn’t want to sit down and he went back inside class.”

She said that when he came back out and did not agree to the police officer’s second request to sit down, “I guess they grabbed his wrist and took him down. He said that they broke his rib and busted open his lip.”

By 11:55 a.m. 10 more students sat next to Green and the City College police presence was more prominent. The backed-up traffic coming from the west of C Street was being re-routed down 15th Street. Green told people what had happened to him on Friday. He also spoke about the inequalities of women and the “men in color.”

Janessa Forney, 19, a political science major, said she knows Green well. She is part of the Associated Student Government and said that Green is a part of various clubs on campus where the two “mingle a lot.”

“We took a conflict resolution training course together a couple of weeks ago,” Forney said. “It was more or less talking about how to approach conflicts with people and the right way to find a solution about it.” 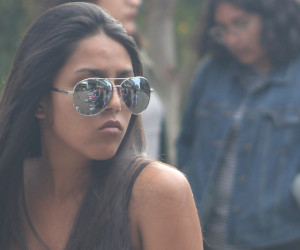 An unidentified young woman sat with Royce Allen Green for an hour on C Street and watched him speak.

By 12:55, 22 people had sat next to Green and many others just came by to hug him and shake his hands. “No more police brutality,” chanted the students. Not everyone present agreed.

“It’s ridiculous. If they really feel this strongly than they can teach other people these values that they have,” said Michelle Biddiscombe, 26, a drama major. “They should be spreading messages of love, not ‘you don’t agree with me, you’re racist, a bigot, arrogant.’”

Many students present believed that the sit-in on C Street was part of the walkout that happened towards Park Boulevard around the same time.

“We are respecting the right to free speech,” said San Diego Community College District Police Department Chief Raymund Aguirre, “and we are here to honor that right and ensuring the safety of the community.” He said that he could not speak about a City Times’ inquiry regarding what happened to Green before his sit-in.

Green is listed on the City College website as one of the “successful transfer students of 2016.”

“I got an AA degree at Balboa Park on May 20; my mother drove down from Los Angeles to watch her son graduate from college,” Green said. 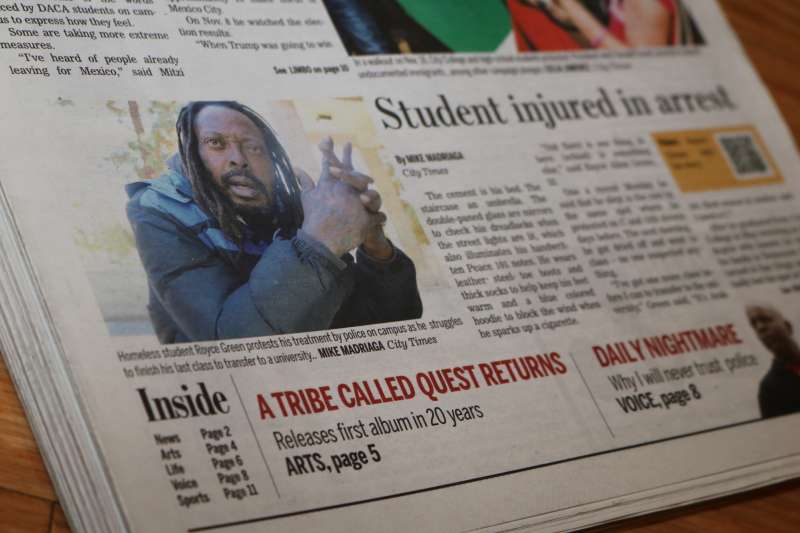 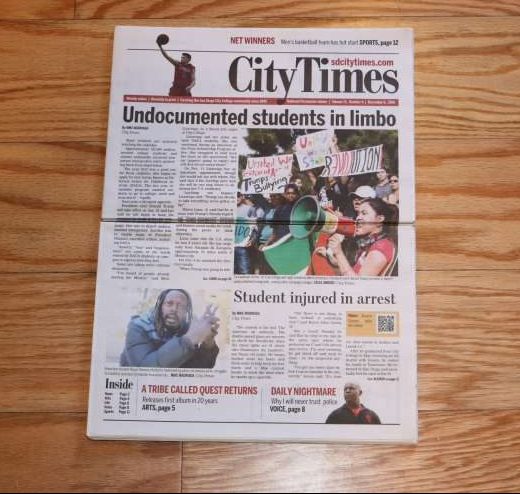