Four million people re-use motor oil as a lubricant for other equipment.

On the morning of July 12, workers in the Otay Mesa area called the San Diego Fire-Rescue Department to check on an abandoned, white-colored, Isuzu flatbed truck that contained about 700 gallons of used motor oil.

“[It’s] a truck leaking what appeared to be motor oil, leaking possibly into the storm drain,” said Alma Lowry, a fire captain of the fire-rescue department, in an OnScene.tv interview. “We were experiencing a few drips, and we took measures to mitigate that with our absorb pads.”

On the raw video footage, the camera handler zoomed out of the utility hole on the street, which was about seven feet away from the truck’s liftgate; the utility hole’s wall appeared to have remnants of a dark liquid. “Luckily, the storm drain is dry,” Lowry commented.

It is illegal to discharge automobiles’ pollutants, such as motor oil, degreasers, antifreeze, transmission fluid, and solvents, into the Municipal Separate Storm Sewer System, according to the City of San Diego site. 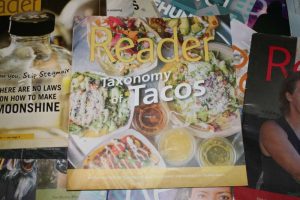 The original story was featured in the print edition of the San Diego Reader on August 5, 2021.

We are “in the process of finding the owner…. we have CHP and Sheriffs here helping us with that investigation,” Lowry continued, “and offloading the motor oil right now.”

On the clean-up video, hazmat workers from the county and fire and rescue department, dressed in either red or blue colored hazmat jumpsuits, are seen offloading the 100-plus 5-gallon containers atop a tarp laid on the sidewalk and dirt lot on the 7300 block of Calzada De La Fuente, about three miles northeast of the Otay Mesa Land Port of Entry. A sizable liquid tote container was on the truck’s bed.

“They got a lucky break,” opined Billy M., an Otay Mesa resident. “This [mitigation] probably saved our City a ton of money and heartache. That manhole leads to pipelines and tributaries, streams, creeks, rivers that’ll eventually meet our ocean. They say one quart of motor oil can pollute 250,000 gallons of water. But also, the owner of the truck could’ve been on the way to the recyclers, and the truck conked out…. 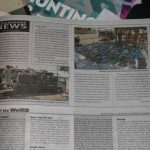 Lowry: “There are agencies that will come and pick up your used motor oil, or you can drop off used motor oil.” In addition, in smaller quantities, participating auto stores take in old motor oil.

“Recycling old motor oil is a win-win,” continued Billy, “I’ve seen people use it to stain [and preserve] wood.”

“On average, about four million people re-use motor oil as a lubricant for other equipment or take it to a recycling facility,” says the EPA website. “Less energy is required to produce a gallon of re-refined base stock than a base stock from crude oil. One gallon of used motor oil provides the same 2.5 quarts of lubricating oil as 42 gallons of crude oil.”