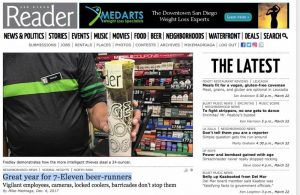 “Yesterday at 9:40 [p.m.] two Modelo 24 oz. cans fell out of his pants,” said Fredley. “I said, ‘What the hell…what is this?’ then he grabbed them and ran away…but his girlfriend is right behind him and she got, like, four Monster energy drinks and she ran, too [without paying].”

Fredley, who’s been working at 7-Eleven convenience stores for 14 years, said that the beer and energy drink theft happened on November 30; the week before, on Thanksgiving, he caught someone else stealing two 18-packs of beer.

Some Normal Heights residents have posted on social media that the 3436 Adams Avenue 7-Eleven (between Hawley Boulevard and 34th Street) is an easy mark for the “criminal-homeless” who hang out at the nearby Normal Heights Recreation Center park and that Fredley and his coworkers don’t do anything “in fear of retaliation.”

Fredley chuckled in disbelief. “They are teenagers [and] not homeless people,” he said.

His coworker agreed as he was tallying up the cash in his register. “That’s why we put this up.”

He pointed to a five-foot-tall soda-crate barricade between the front doors and the beer coolers; patrons seeking access to the coolers have to walk nearly all the way around the checkout island and hot dog station to get to the beer — and they have to come back the same way.

“They ran and I followed them,” Fredley said, regarding the November 30th incident. “Both are black and maybe 18 to 19 years old [and] they are regular customers.” He didn’t catch them.

Paul is the manager of this location and the other 7-Eleven at 4687 Ohio Street where it meets Adams Avenue. “They are young kids [who do the beer runs],” he said. Recently he caught someone taking two 18-packs of beers. “It’s an ongoing problem…. [At the other location] they have a bigger problem there.”

“Jane” (real name withheld at her request), who works the day and early night shift at the Ohio Street 7-Eleven, has been an employee there for about four years.

“[In September] we had a tall Mexican guy come in every single night,” Jane said. “When we [were] busy, he always took at least an 18-pack of Modelo every night [and] because of him we started locking [the beer doors at night]; then he started coming in the morning.”

Paul said he leaves the decision of whether to lock up the beer doors to his employees.

Jane showed me their surveillance camera and monitor setup that captures various angles of the newly renovated store, then described another scenario.

“He was opening the beer [door], so I said to my partner, ‘Hey-hey-hey, he’s grabbing the beer — you have to be here,’” she recalled. She said the coworker stood by the store entrance, but then the beer thief dodged him and in doing so, “one case fell and the other one he took.”

Jane said that other thieves are more determined and skilled. One walked away with an “18-pack in each hand and a 12-pack [between each of his armpits]…and it’s always Modelo — they don’t take anything else.”

Fredley agreed with the thieves’ taste for Modelo but couldn’t explain why they go for the $19.99 18-packs.

“One guy got your [Reader] magazines,” Fredley said as he pointed to the magazine rack by the barricade, “and got some tall cans and wrapped the magazine around them — and walked out.”

All the employees that I interviewed said the beer-runners pull most thefts during the day, especially when it’s busy inside. Some beer-runners look right at the employees when making the run for it, others in hoodies and baseball caps shove the brew(s) in the front of their pants or their purses…and then there are tactical beer-runners.

“One goes this way, one goes that way, and one goes that way,” Jane explained as she pointed at the three aisles that lead to her register. “[The three customers] come at the same time, then when I am busy right here [ringing up the first customer], the other guy with the beer runs.”

Jane and Fredley have caught some of the thieves red-handed inside the stores, but Jane said, “We cannot get [them] outside of the door because it’s policy; everything has to happen inside.” They said it’s difficult to get them arrested because it’s only petty theft and the police response for this type of crime is not a high priority and sometimes takes “30 minutes” to respond.

Fredley said he and his coworker apprehended someone stealing Olde English beer a month ago, then, “He tried to hit me with the beer.”

“The cops said that we have to be careful with our lives,” Jane said. “Sometimes you don’t know what they have [on them or in their getaway car].”

Published in the San Diego Reader on December 4, 2017