Fredcel is located in the oddest place for a Filipino restaurant — in Cherokee Point, at 3876 38th St., behind the Family Dollar store. 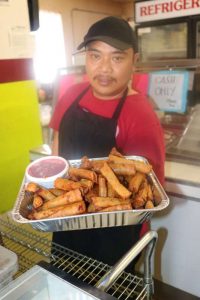 “Pare (dude in tagalog), we made [and sold] about 6,000 lumpias today (April 15),” said Erick Rodriguez, as he helped his patrons load their aluminum trays overflowing with lumpias, into their minivans.

Erick, 39, has been helping his dad, Fred, and mom, Cely, to make lumpias since he was a kid. Lumpias are said by most Americans to be the most recognized delicacy from the Philippines.

They are appetizers made with minced meat and spices, with onions, carrots and celery, then rolled into a lumpia wrapper (which is made of wheat flour). After they are rolled; they are then deep-fried in vegetable oil.

His friend Mike from the neighborhood, verified this, because he comes by after hours to check on Erick’s wellbeing in their 6000 sq./ft. lumpia-mill. “I measured his speed, it’s about 5 seconds per lumpia,” he said, “he’s trying to go faster to be the ‘king of lumpias.’”

Many restaurants order lumpias in bulk which are machine-made and “it’s not the same because they are processed to be frozen and sent around the U.S.,” said Mike. “Erick handcrafts each one, they get fried, and then sold soon after. They are hella-fresh.”

The crispy-snacks measure on average at approximately 4.25″ long and a 1″ diameter.

Daroll Dimanche, 30, from Spring Valley has been in the Navy for almost 12 years and said that Erick’s lumpias are up to par with the originals back in the Philippine islands. “I gotta hurry them back (home),” he said, “my wife is pregnant and these are for her.” He also ordered some pancit (noodles) “for her cravings.”

The day before Easter is one of Erick’s busiest days; as with Christmas and New Year’s. “We usually sell about 6000 (lumpias per day) on these type of holidays,” said Erick. Baby-showers, birthdays, debuts, quinceañeras, weddings, anniversaries, wakes, and post-funeral parties are other popular lumpia destinations. 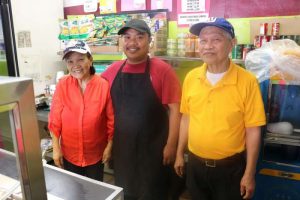 Cely, Erick, Fred. “Everyone thought that we were a donation drop-off spot.”

“I have to pick some up for my co-workers,” said Alex Vitug, from Mission Valley. Vitug is of Filipino descent and praises how the Rodriguez family provides the old-school hospitality “like back in the P.I.”

Many of their customers are from different races. Erick said that they are “halo-halo,” which translates directly to “mix-mix,” but is also the name for a Filipino dessert with shaved ice, yam, corn, sweet-beans, ice cream, coconut, milk and other exotic fruits from the homeland.

Fredcel serves the traditional Filipino foods; including adobo, dinuguan (chocolate-meat), sinigang na baboy and pancit. Erick tries to “keep it (the menu) simple for the newbies.” If a family wants to order the more hard-core stuff like lechon (roasted pig) or kare-kare (peanut butter stew with tripe and vegetables); his family can make those options on special order.

“But what about balut (fertilized duck egg),” asked one of the customers, “I want my kids to [egg] hunt for baluts tomorrow.”

Erick said that they don’t sell balut, despite the high demand for one of the most talked about “Fear Factor” foods.

Fred and Cely started making their lumpias (as a business) in their National City home in the 1990s – this is when their only son, Erick, seriously trained and mastered the lumpia rolling technique. They said they got so busy at their house, that the city cited them. “We had customers’ cars lined up to our garage,” Erick said, “everyone thought that we were a donation-drop off [spot].” They moved their operation to Cherokee Point about 12 years ago “to avoid the competition from the other Filipino restaurants.”

One customer joked that Erick was the equivalent to the Manny Pacquiao of lumpia making, “he’s fast and precise.”

There is speculation that Pacquiao will fight in July. If that happens, Erick might have to bring in backup to their mom-and-pop (and son) operation. “The last time that Manny Pacquiao fought, we made 12,000 lumpias (in one day),” he said. “I’ll be ready to rumble.” 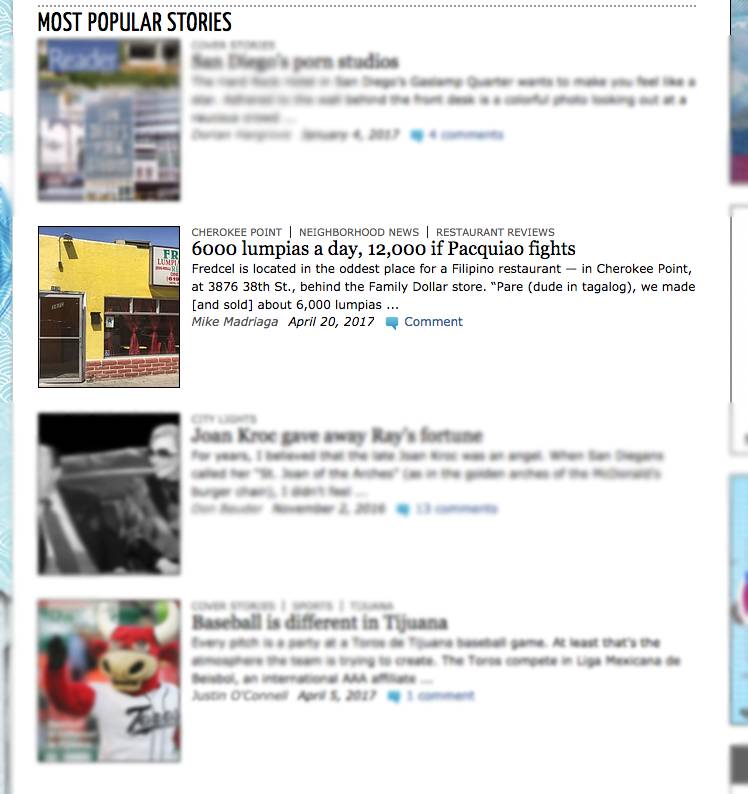 They moved their operation to Cherokee Point “to avoid the competition from the other Filipino restaurants.”