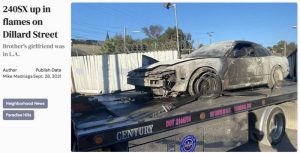 The original story was published in the print edition of the San Diego Reader on Sept. 28, 2021.

On September 16, a person who wore a dark-colored hoodie and carried a red-colored gas container walked up to Mervynn Fernandez’s 1990 Nissan 240SX near the Paradise Valley neighborhood on Dillard Street. “He poured gas on it and lit it on fire at 2:50 a.m.,” Fernandez said to me on September 26. “I’m still a little stressed over the situation, so it’s hard for me to talk about it.”

Fernandez, 24, sent a video clip from his surveillance camera recorded early that Thursday morning. On the incriminating footage, the suspect lit what appears to be a rag, then threw the burning piece towards Fernandez’s vehicle, which was covered with a grey-colored car cover. For a couple of seconds, the fireball filled nearly half the image frame.

“The neighbors heard three loud bangs from the engine exploding. [My neighbor tried] putting out the fire with at least eight fire extinguishers, while his wife was on the phone with 911.”

Shortly after, Fire Truck Number 51 pulled up to Fernandez’s residence, about two miles east of where the I-805 passes over Division Street. On the 619 news media video posted online, a fireman is depicted extinguishing a fire burning the 240SX’s K-series-engine components, while another firefighter opened the hatchback with the Jaws Of Life tool. On the ground lay nine fire extinguishers. “My neighbor does fire sprinklers in buildings and fire extinguishers with a company called FireWatch.”

“The San Diego Police Department and San Diego Fire-Rescue Department showed up and knocked on our door,” Fernandez continued. “I woke up and saw my car covered in flames as the firefighters were working on putting it out. I thought it might have caught on fire itself over something electrical, maybe.”

Fernandez and the first responders reviewed the footage captured by the camera mounted atop Fernandez’s driveway, where he repairs and installs parts on “cars as a side hustle for neighbors and friends” while simultaneously caring for his ailing father inside the house.

Julia, Fernandez’s live-in girlfriend, was inside the house sleeping that morning. Her vehicle was parked around eight feet away from the burning 240SX. “My vehicle was not damaged,” she said, “but we did have to relocate our cars and have them in storage for fear that they might try to attack us again.”

Julia, a 24-year-old college student, and Fernandez suspect the arsonist is a driver or passenger of a “white Hyundai” that drove by their house at 2:40 a.m., ten minutes before the 240SX burned down. “The footage was unclear to see the people,” Julia said. “We sent it and [additional] footage from our neighbors to the investigators; they are still actively working on the case.”

Nissan 240SXs sold new throughout 1989-1999 became popular vehicles to build after Fast and the Furious 1 was released in 2001. Letty Ortiz, who Michelle Rodriguez in the franchise played, pulled up in her magenta-colored 240SX in the first movie’s opening scene at Toretto’s Market & Cafe. Later on, her 240SX smoked a Mazda RX-7 in the Race Wars scene. In June 2021, local movie theatres premiered F9, the latest flick in the saga. “Fast and the Furious movies are too crazy now, so I can’t really relate,” notes Fernandez.

Fernandez’s 240SX, which sports a set of old-school Work wheels and a Tein coil-over setup, was already gaining traction on social media before it burned down.

“My brother and his girlfriend at the time wanted to borrow the [240SX] for social media content,” Fernandez explained. “I let them borrow it for a day, but they kept pushing to borrow it longer. Four days passed, and I took the car back, and they argued.”

“This person was using the 240SX for social media fame,” said Julia. “They got three million views on her video with the 240SX on Tik-Tok. Mervynn took the car back because of the way she would [allegedly] treat his brother.”

“One week later after the breakup, my car burns,” Fernandez said. “Not sure if I’m allowed to talk about how far cops are in because it might jeopardize the case.”

Per 619newsmedia in part: “UPDATE: The ex reached out via DM and stated she was in LA at the time. Note all information posted from the vehicle owner was given to SDPD.”

“We were not prepared for the emotional toll and financial toll that this would have on us,” Julia said. “We also have to pay attorneys’ fees, and they charged us a total of $900 to take out and move his 240SX from the tow place.”

Fernandez’s friends set up a GoFundMe campaign to help him repair the 240SX.