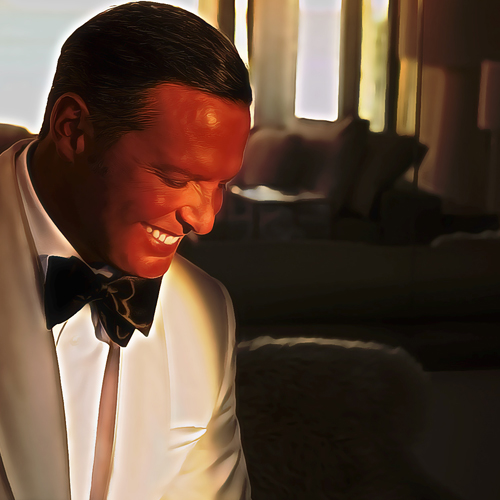 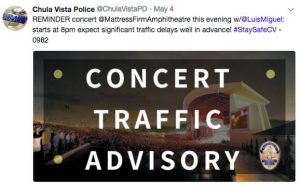 Fans from both sides of the border chimed in on other social media apps.

“We are already on our way, but there’s a lot of traffic!!! Wait [Luis Miguel], do not start until we get there!” posted one. Another fan typed while sitting in traffic “Te amo ‘luismy,’ (I love you Luis Mi).”

But not all took to the 48-year-old Latin Pop musician and Grammy Award winner’s concert so kindly. This was the first of 36 concerts scheduled at the Mattress Firm Amphitheatre in Chula Vista, which is about two miles east of the I-805. 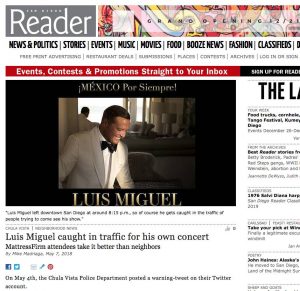 The original story was featured in the print edition of San Diego Reader on May 17, 2018.

“I got stuck in the concert traffic for an hour on Main Street,” said Marcus Jackson, “and I just rolled down my window and said to the police officer who was guiding traffic by Heritage Road, ‘Man, this is killing us residents over here.’

“The police officer suggested that we take the back way (through Otay Mesa Road), but I informed him that that way is usually longer (2.5 hours), like during the Depeche Mode concert last year. He also said we may have to mark down on our calendars when there are events to avoid the traffic.”

Erasmo Salazar, 36, took the route (suggested by the police officer) to his home in the Vista Pacifica neighborhood which sits atop of the concert venue to the south. “I was coming from the other side around 8:00 p.m., from Otay Mesa Road and the concert traffic was already bumper to bumper on the junkyards side,” he said. “I spent like 50 minutes to get home and without traffic it usually takes me like three minutes.”

On February 4th, the City of Chula Vista released an update regarding the completion of the Heritage Road connector from Otay Ranch (up north off of Olympic Parkway), to Main Street. “This new stretch of road will relieve traffic congestion on Olympic Parkway and provide quicker access to major roads and highways for thousands of residents.” 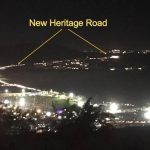 Marcus Jackson said to the police officer who was guiding traffic by Heritage Road, “Man, this is killing us residents over here.”

“[The traffic] is worse as you can see on the picture,” he said. At about 9 p.m., he took a photo which depicted a line of headlights leading from Main Street and the newly connected Heritage Road.”

“The construction is still going on Main Street (by Heritage Road),” said “Jane,” a Mattress Firm Amphitheatre employee, “and that’s part of what made the horrendous traffic — one lane was blocked.”

Jane, who requested us to change her name for the story, has been working at the venue for almost three years. “Luis Miguel decided that he didn’t want to go on at 8 p.m. like he was supposed to,” she said, “instead, he left downtown San Diego at around 8:15 p.m., so of course he gets caught in the traffic of people trying to come see his show. Chula Vista police had to escort him to the venue and he didn’t go on stage until around 9:15 p.m.”

Unlike the residents stuck in traffic, “The concertgoers were surprisingly calm during the wait,” Jane said, “I was half-expecting them to get rowdy and angry, but nope.”

Rossy Arroyo and Martha Cardenas waited an hour and a half in traffic to get into the venue. The two won the tickets from an Amor 102.9 radio-call-in contest. 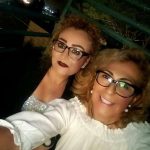 Rossy Arroyo and Martha Cardenas waited an hour and a half in traffic to get into the venue. The two won the tickets from an Amor 102.9 radio-call-in contest.

“The concert started at 9:30 p.m., which was late,” Cardenas said, “and from where we sat (up top), the fans were getting a bit anxious.”

“He played his older songs but we wanted him to sing his newer ones like ‘Dormir Contigo,’ ‘Por Debajo De la Mesa,’ and ‘Amarte Es Un Placer,’” Cardenas said, “but he didn’t, which is OK. We had fun.”

Salazar and Jackson could hear the concert from their homes as well.

“On concert days we try to stay in home all day or go out and visit family,” Salazar said, “but the main concern is that our neighborhood has only one entrance, and on concert days, it’s impossible get in or out in case of an emergency.”

Another neighbor, Caroline Serrano, has been advocating the freeing up of concert traffic congestion. “According to Officer Lacarra and Vivian Moreno (council representative for Councilmember David Alvarez), should there be a life-threatening emergency, a helicopter would be sent. We will just have to wait for something horrific to happen to one of us, for someone to help us.”