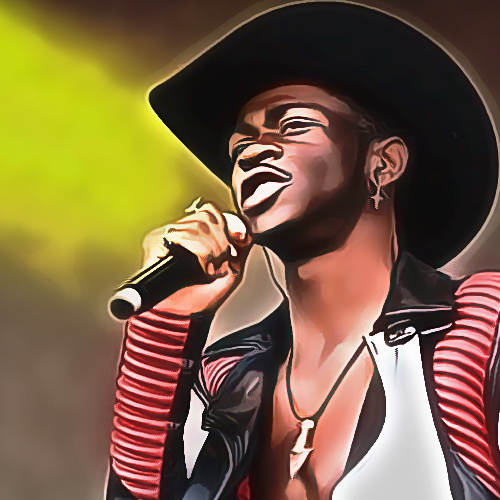 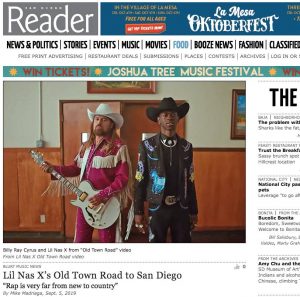 The original story was featured in the print edition of San Diego Reader on Sept. 5, 2019.

Some San Diego hip-hop fans I spoke to said they didn’t like “Old Town Road” when it first dropped on local airwaves and the club scene — but what was it like for our country music fans?

“There was a bit of opposition from the country music purists,” says Byran Roberson regarding the rap-trap-and-country jam by Montero “Lil Nas X” Hill, “but I don’t think it had a bad reception in the country dance community. It’s played in some country bars.”

Roberson is a local software developer by day, and a country dance instructor by night. “We use the song for line dancing,” he said to me on August 19. “As long as there is an eight count, you can dance to it. There’s also a DJ/choreographer that I know who took an old dance and applied it to ‘Old Town Road.’ I think he sped up the [beats per minute] and it worked perfectly.”

The song started off as a track to accompany the then-19-year-old-rapper’s memes in 2018. Then, in early 2019 it picked up “horsepower” on the Tik Tok app when users filmed themselves dressed in cowgirl- or cowboy-inspired attire and danced to Lil Nas X’s song. The users then posted the videos on the app with the Yeehaw hashtag. In April, news outlets reported that “#Yeehaw” helped manifest thousands of videos on TikTok with “more than 67 million plays” — the majority of which sampled snippets of the bass-thumping and banjo-strumming song.

As “Old Town Road” climbed Billboard’s Hot 100 chart (which ranks the popularity of all genre singles into one chart) to eventually occupy the number one spot for 19 weeks — breaking the chart’s previous record — it was yanked from the Hot Country songs chart in March, for “not being country enough.”

“While ‘Old Town Road’ incorporates references to country and cowboy imagery,” said a Billboard spokesperson to Rolling Stone, “it does not embrace enough elements of today’s country music to chart in its current version.”

Clairemont resident and DJ Chuck “Big Country” LaVigne was an “Old Town Road” fan from the get-go. “There was enough of a group of people [in country music fandom] talking about the song,” he said on August 20, “but as soon as Lil Nas X did the remix with Billy Ray Cyrus, re-released it in April, and released the video with Billy Ray in it in May, it took off.”

Some country stations around the U.S. reportedly never played the Georgia-based country rapper’s song, even after he featured “Achy Breaky Heart” singer Cyrus.

Tammy from the John and Tammy in the Morning on KSON show spoke on the prospect of the controversial song playing on their 103.7 “San Diego’s #1 New Country” radio station in April. “I dunno,” she questioned, “does it fit KSON right now? Probably not.”

LaVigne disagrees. “The song was played on local country stations really hard when it first came out,” he said. LaVigne has been DJing country music for 25 years; he said he plays “Old Town Road” at three different clubs on constant rotation. “Rap is very far from new to country,” he says, “but it was never as prevalent.”

On Jimmy Dean’s 1961 “Big Bad John” country song, some argue that Dean sounds as if he’s “rapping to the beat.” “And now you have the Colt Fords and Lenny Coopers; all of this you call ‘the third road folks,’” LaVigne added, “or, for lack of a better term, a genre of music called ‘hick-hop.’ When it comes to radio, it’s fun to listen to, and when it comes to clubs, it’s fun to dance to. And that’s what the younger kids are looking at, and that’s why it gets them going crazy.”

If San Diegans want to dance to Lil Nas X’s song in a country bar, Roberson says that he’s heard the song played at Off Base Bar and Grill, where LaVigne DJs, and Moonshine Beach in PB. “Moonshine is fun every night they’re open,” Roberson says, “but you have to get there early if you want to dance with some space.”

TwitchCon 2019 is a convention where attendees can meet streamers, watch esports, play games, and buy product, to be held at the San Diego Convention Center on September 27-29.