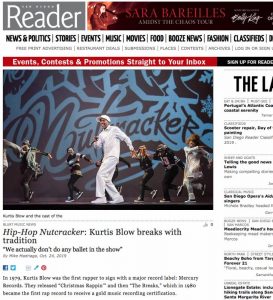 The original story was featured in the print edition of San Diego Reader on October 24, 2019.

In 1979, Kurtis Blow was the first rapper to sign with a major record label: Mercury Records. They released “Christmas Rappin’” and then “The Breaks,” which in 1980 became the first rap record to receive a gold music recording certification.

“‘The Breaks’ is an ode to all of the b-boys,” Kurtis Blow said to me on October 15. “I wanted to make a song with a lot of breaks in it, so that the b-boys could do their thing. After 1980, that’s when they started calling it breakdancing — it was b-boying before that.”

In the 1970s, the breakers were referred to as “break-boys” and “break-girls” — then the names were shortened to “b-boys” and “b-girls.” The term “break” in our culture — before it was coined as “hip-hop” — was derived from when the DJs at the time would play and loop a portion of a song on their turntables and tape players. “That was the funky-funky break,” Kurtis said, “and when the song got to “the break,” that’s when we went down to the floor and did our best moves. This was the inspiration of hip-hop: the innate love of the drum.”

“Did you break dance back in the day?” I asked the ordained minister, who is known to his peers and family as Kurtis Walker.

“I started breaking in 1972 when I was 13,” he replied. “I was a small little shorty and I was always doing flips and acrobatics — so the bigger kids came and got me and asked me to be a part of their crew and compete against the east side. We were from the west side of Harlem — the actual, real-life Sugar Hill where Malcolm X hung out — so we were called the Hill Boys.”

“What was breakin’ like back then,” I asked him.

“It was just starting then,” he responded. “We were creating a lot of the moves, and we all wanted to dance like James Brown with the funky footwork. So when we went down to do our splits and push-ups [like James Brown did], we would stay down there and we did a lot of footwork on the floor — trying to take [the dance] to the next level. One of the first moves was, we called it the clock, where you go down to the floor and spin around like Curly from the Three Stooges.”

“Like when homeboy’s on his shoulder,” I asked, “and he’s running around in circles.”

“Right,” Kurtis affirmed, and we both laughed.

“That was one of the original b-boy moves,” Kurtis continued, “from then, we stayed down.”

Fast-forward almost 48 years later. “Sometimes [Kurtis] gets down [and breaks] during the finale,” said Jennifer Weber, “Kurtis performs an intro to our set as an MC, and the entire cast performs ‘The Breaks’ with him as a finale.”

Weber is the co-creator, director, and choreographer of the Hip-Hop Nutcracker. It’s a play in which she, Kurtis, b-boys-and-b-girls, and a production team “utilize digital graffiti and visuals to transform the landscape of E.T.A. Hoffmann’s beloved story from traditional 19th Century Germany, to the vibrant, diverse sights and sounds of contemporary New York City.”

“San Diego is an awesome city,” says Weber, “with a true passion for hip-hop.”

“I noticed on the play’s highlight reel, that your dancers implement the same moves we did in the 80s — like the headspins and pop-locking — how do the hip-hop dance movements transition into ballet, or vice versa?”

“We actually don’t do any ballet in the show,” Weber said. “The show is using the various languages of hip-hop to tell the story of The Nutcracker. Since there are so many characters in The Nutcracker, it is fun to play with the different vocabularies. For example: the toy soldiers use popping and strutting to give that classic toy vibe, while the snowflakes use a lot of breaking power moves to create the feeling of a storm.”

(I remember dancing to Kurtis Blow’s Ego Trip album in 1985. We had our own version of the “nutcracker,” which was a variation of the “windmill” — a floor move we’d do, by utilizing both legs to propel us from our back to our shoulder, then to our chest to the opposite shoulder, then onto our back again; the repetitive process made our legs look like spinning blades of a windmill. We’d also windmill on top of a basketball to Kurtis’s “Basketball” song, as he rapped “…. just like I’m the king on the microphone, so is Dr. J and Moses Malone” backed with the catchy female chorus chanting “They’re playing basketball/We love that basketball.”)

“Do you implement any other music from back in the day into the Hip-Hop Nutcracker?” I asked him.

“I do, it’s incredible,” he responded, “I do ‘Christmas Rappin’ of course, and then I go into a medley of other old school songs like the Sugar Hill Gang’s ‘Rapper’s Delight,’ ‘The Message’ [by Grandmaster Flash and the Furious 5], and Doug E. Fresh — you know, all of the pioneers.”

Hip-Hop Nutcracker is a show for all ages. Ticket prices start at $33.50. 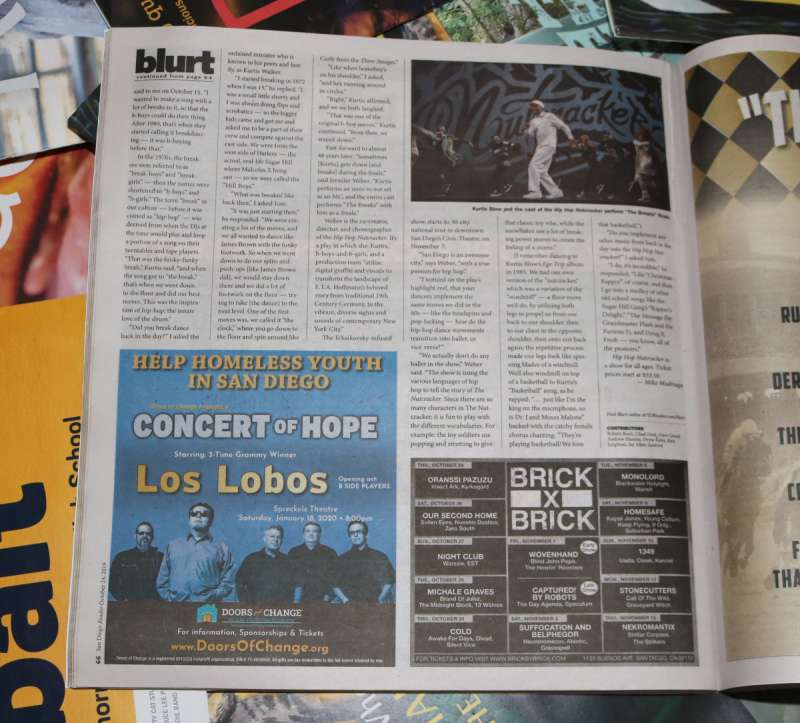