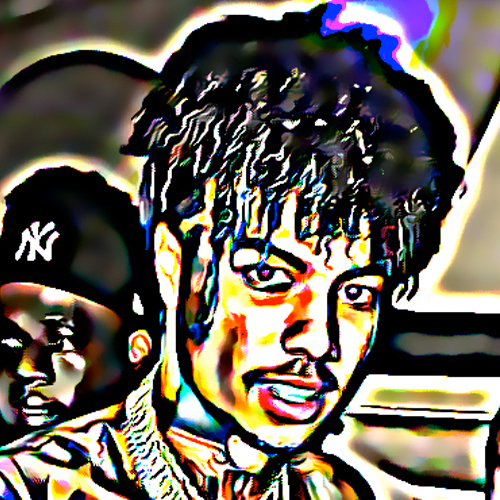 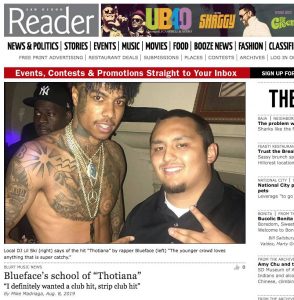 The original story was featured in the print edition of San Diego Reader on August 8, 2019.

San Diego-based post millenials are hyped that Blueface will perform at SOMA on August 22. Some elders, however, are not.

In a Genius.com interview, the 22-year-old rapper from Los Angeles, broke down the meaning of “Thotiana”: his first top-ten single. “I definitely wanted a club hit, strip club hit,” he said. “I wanted it to be as viral as it is. So yep, I wanted it to be groovy, booty shaking, and all that.”

The remixes of the song featuring Cardi B and YG were launched earlier in the year, with accompanying and individual music videos created by Cole Bennett, the go-to videographer-and-director in the new-school hip-hop and rap scene. Each video garnered 200 million views on YouTube in six months.

Social media reaction to the song has been mixed. On July 6, RR was one of the 6000-plus fans at Blueface’s Papas & Beer – Rosarito concert; she posted a small video clip on Instagram and captioned it: “babyyyy (followed by the heart-eyes emoji)”; her friend responded: “Omg that’s daddyyyy [you’re] lucky hahaha.”

Another female, SB responded: “How u [gonna] be a great lyricist and you have absolutely no flow… BOY BYE. Somebody done told him wrong.”

On the rapper’s own Instagram, his behind-the-scene clip of the Rosarito sold-out, 18-and-up concert, depicted RR and her fellow concert goers, rapping verbatim to his purposely “offbeat rhymes.”

México was definitely one of da best crowds 🇲🇽

When “Thotiana” dropped, the crowd of mostly Americans, sang the chorus in unison: “Bust down, Thotiana — I wanna see you bust down — Pick it up, now break that shit down….” while many activated their smartphone flashlights: a 21st-century version of the “lighters in the sky” concert ritual.

“I think as they get older, acronyms that have meanings like [thot] will bother them,” said DJ Lil Ski, “but as of right now, some see it as cool.”

DJ Lil Ski is a 21-year-old hip-hop DJ and San Diego State student. Back in November, he and his pops DJ Mikeski DJed a Sweet 16 party at the Woods Clubhouse in Chula Vista. “…. and come to find out, the day of, Blueface performed there,” Lil Ski said, “that was about two weeks before he blew up into the mainstream.

“I think the word ‘thot’ came from Chicago, and everyone began hearing it in like 2012, when it started to gain ground with artists like Chief Keef. Now every artist says it in songs, and it’s a common slang word. And since it appeals to that ‘ratchet-nasty-party’ vibe, I feel that’s what attracts the [youth] towards it. But I know for a fact if you call someone a thot in just regular everyday conversations, there will be times where it won’t be taken lightly.”

Blueface was born as Johnathan Michael Porter in the late 90s. His artist name is likely based on the blue-tinged Benjamin Franklin portrait tattooed on his right cheekbone. In 2014, he was the starting quarterback for Arleta High School when they won the East Valley League championship. His high school football career lead to Fayetteville State University where he played football for a short time. It also inspired the background story on his “Thotiana” remix with YG music video where Blueface portrays a high school quarterback, that impolitely bails on his coach to pursue the women on the sidelines.

“The younger crowd loves anything that is super catchy,” continued Lil Ski. “For example that chorus in ‘Thotiana’ is repetitive, but it’s so catchy that it stays with you and you can hum it all day. And to throw more gas onto the fire, that little dance that he performs along with the song, is catchy as well. Younger kids like to dance and they help create these dance challenges or videos of themselves doing the Blueface dance. And also, that little ad-lib he throws in at the intro to “Thotiana” — where he says: ‘Blueface, baby; Yeah aight’ — that is repeated by so many people.”

Shortly after Lil Ski kicked it with Blueface after the Sweet 16 party in Chula Vista, Blueface signed up with Cash Money West, the West Coast extension of the Cash Money Records label, “and he really blew up when he Instagrammed clips of himself in studio with Quavo from the Migos, and Drake.”