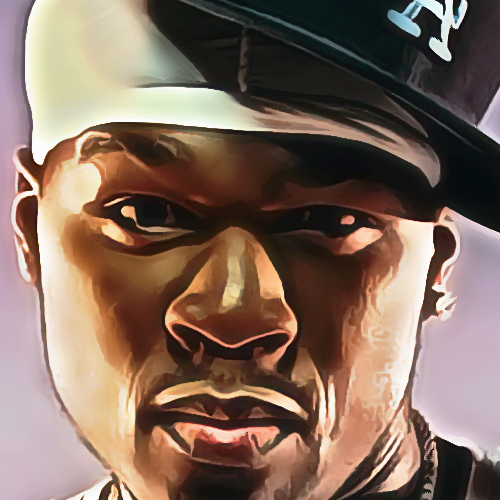 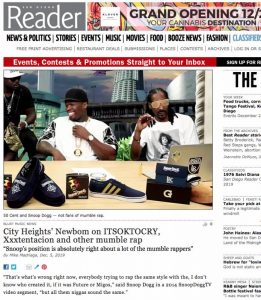 The original story was featured in the print edition of San Diego Reader on Dec. 5, 2019.

“That’s what’s wrong right now, everybody trying to rap the same style with the, I don’t know who created it, if it was Future or Migos,” said Snoop Dogg in a 2014 SnoopDoggTV video segment, “but all them niggas sound the same.”

Then at about the seven-minute mark of the YouTube video, Snoop and Grammy-award winning rapper 50 Cent, mimic the “mumble rap” style wherein the lyrics sound indistinct.

In the 90s, my uncle said the same thing to me as I watched the “Doggy Dogg World” video on MTV. “Why they gotta ruin The Dramatics’ [sampled] song like that,” he said, “I don’t understand what they’re saying.”

That was in 1994, about three years after Aaron Newbom was born. “Snoop’s position is absolutely right about a lot of the mumble rappers,” Newbom said. “But, the same statements could be made in any genre of music. So he is right, but also wrong in that sense.”

Newbom is a mumble rap fan from City Heights; I chopped it up with him on October 21 before he left to work at a local medical manufacturing facility. “What mumble rap song sounds original and artistic, to you?” I asked him.

“Let’s start with ITSOKTOCRY,” he responded. “In his song ‘Jirachi,’ he makes use of voice alterations and autotune, but in a way that he almost turns his voice into an instrument on its own.” 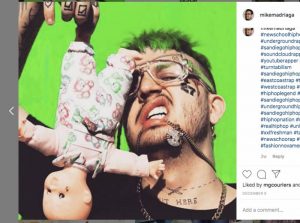 “In his song ‘Jirachi,’ ITSOKTOCRY makes use of voice alterations and autotune, but in a way that he almost turns his voice into an instrument on its own.”

ITSOKTOCRY is a Denver-based rapper with face tattoos and colored hair — two characteristics that older hip-hop heads tend to identify with mumble rap, which is not always “on point.”

“On his ‘Pop, Lock, and Dropdead’ song, ITSOKTOCRY portrays this ‘party to escape the endless depression we are all experiencing in this society’ mentality,” Newbom explains. “He is also sarcastically bragging about complete despair and suicidal thoughts” — which are themes evident in the emo rap subgenre that’s crossed over with mumble rap, at times.

While most of ITSOKTOCRY’s lyrics are coherent, the mumble part of the song, goes:

Got blood on my pink Vans
Got knives, I don’t use hands
Hush man, you not my mans
Smoke blunts with Slenderman

“Not all mumble rap is meaningful and artistic,” Newbom admits, “but not all 90s rap is either.” 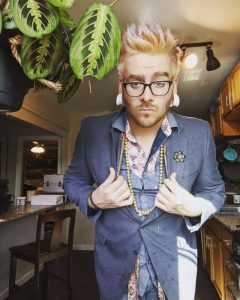 Newbom is a mumble rap fan from City Heights; I chopped it up with him on October 21.

“Then of course there’s also Xxxtentacion. Most hip-hop people I know agree he was one of the most talented artists who died in 2018 before he really got to flourish.”

Snoop will perform at the House of Blues on December 8. ITSOKTOCRY does not have San Diego listed in his 2020 schedule as of yet.