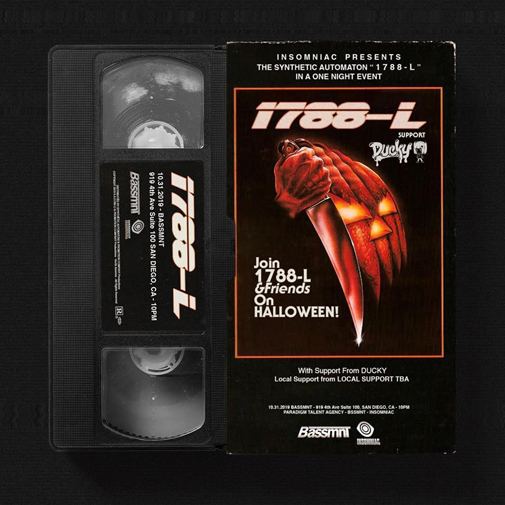 The original story was featured in the print edition of San Diego Reader on Oct. 31, 2019.

In early 2018, when 1788-L dropped its dubstep bangers on the SoundCloud music app, fans couldn’t click the water drop and subwoofer emoticons quick enough to keep up with the unknown-producers’ 140-bpm (beats per minute) electronic dance music. Another popular emoticon posted underneath the wobbly-modulator twang-infused songs was a yellow and furrowed eyebrows face, with thumb and index finger — that translates to: “I’m perplexed AF.”

“Who is 1788-L?” questioned John S., a Halloween mask maker and electronica dancer from south San Diego. “His or her or their music is bat-crazy-inspirational for my monster mask making gigs; it bumps and sounds ‘horrrrrrrrific.’”

In April, Deathpact, and the alphanumerically-named entity released “Malfunkt.” The track commences with a sinisterly slow piano chord intro, then it speeds up with an accompaniment of trills; by the one minute mark, the tempo seems to have near-maxed out, then the multiple bass drops transition the song into the 2 beat, varied low frequency oscillator-packed, phrases.

“I am all up for this Frankenstein vibe,” expressed an EDM-basshead online; John responded: “syntax error — it’s more of a vampire vibe.”

John was referring to the portion of the song when the bass abruptly disappears and it segues into an organ sounding mid-tempo acoustic. Usually, this allows for the dancer(s) to chill. Then, as the bass returns intermittently, and the girl states “malfunction,” the listener is sucked back down into a neurotic “trance-by-subwoofer” mindset, that’s further stimulated by the non-audible super low frequencies that rattle the listeners’ guts. 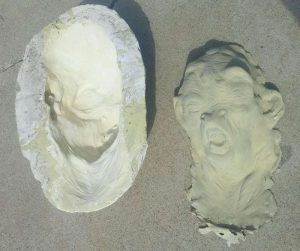 John could dance to old-school electro or new school electronica, while the latex rubber dried inside his monster mask molds.

John sculpted zombie masks for Mask U.S. in Chula Vista for years, but went freelance, so he could dance to old-school electro or new school electronica, while the latex rubber dried inside his monster mask molds, or while his newly painted demon-faces, cured. He “pops” and “ticks” to dubstep music — which are subgenres of “breaking” — where the dancer’s body hits and convulses to the beat, and the robotic movements are remixed into “waving” and “electric boogaloo” maneuvers.

“‘Malfunkt reminds me of the ‘Vampire Killer’ song from the Castlevania video game,” John added.

“Yeah, sort of,” I responded, “that’s the Nintendo 8-bit system where we’d blow into the cartridges, right?”

John nodded, but he was perplexed as we spoke. He couldn’t decipher if 1788-L sampled old-school sounds from the Atari, Speak & Spell, and Nintendo systems (on other tracks), or, “do they create sounds from scratch and then tweak them on their personal computers,” he wondered. 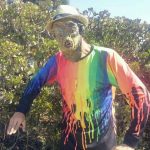 John “pops” and “ticks” to dubstep music — which are subgenres of “breaking.”

The circa 2018, self-proclaimed “synthetic” entity, portrays a mysterious persona online; and on stage isn’t any different. On YouTube videos that I’ve seen: the long-haired human being that represents 1788-L on stage is further masked by the intense lighting from the jumbo video screens, spotlights, and laser-beams.

“None of the people that I’ve spoken to know the true identity (or identities) of 1788-L,” John said, “and online, there are rumors that he goes by a “proxy name” of Stonewall Klaxon — but that hasn’t been fact-checked.”

Many of the songs produced by 1788-L have dark, post-apocalyptic, and fangoria emanations. The “Cyberspace” track is laced with synthesized monster sounding voices, and cellos, violins, and violas used in the shower scene of the Psycho movie. “Nu Ver Ka” hits on that “halloweeny” sonic as well. A woman’s voice has been tweaked to sound as if she’s in another dimension, the voice is then further synthesized to sound like Max Headroom when he was losing his broadcast signal or digitally stuttering.

The one thing that’s evident about 1788-L, is that he, she, or they has/have some epic digital clout, as witnessed in the approved and released 1788-L remixes of classics by Daft Punk (“Rinzler”), Skrillex ft. Poo Bear (“Would You Ever”), Glitch Mob (“Disintegrate Slowly”), and Kraftwerk (“Radioactivity”).

John S.: “His or her or their music is bat-crazy-inspirational for my monster mask making gigs; it bumps and sounds ‘horrrrrrrrific.’”