On July 22, we visited the Hot Wheels booth at the Comic Con International: 2016 in San Diego.

Since the Darth Vader inspired vehicle was a hit at the 2014 convention, it only made perfect sense for Mattel, the parent company of Hot Wheels, to create a follow-up-build for the 130,000 fans.

Action Vehicle Engineering (AVE), lead by Billy Hammond, was contracted by Mattel and Hot Wheels to create the lifesize replica of the new X-Wing Fighter.  The Star Wars inspired toy from the “Carships” series was designed by Dmitriy Shakhmatov. 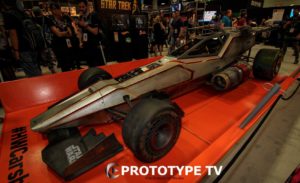 “… some parts used on the vehicle were actual NASA parts and test equipment from the Apollo spacecraft,” Evan Markus said, “like the turbines on the sides, the guns on top and much more.”

This vehicle not only looks fast, it’s actually pretty quick, too..

“The motor came from the Ford Ecoboost series,” said Evan Markus, “it’s from the Formula 4 the open wheel car series and we tested the car at the Willow Springs racetrack last week.

“It’s fast and it can handle very well,” he said.

Markus, a metal fabrication tech, was one of the main fabricators for the project.

“I built most of the cockpit,” Markus said,” I had to redo the pedal assembly, then made the seat fit followed by the gear shifter and removable steering wheel.”

He cut the chassis and stretched it an additional four feet by the cockpit where the driver sits.

The vehicle can accelerate to 180 miles-per-hour but can stop on the dime, too, because it has AP dual piston calipers and slotted rotors in the brake department.

The Formula 4 style suspension is an adjustable coilover setup to keep the car planted at what feels like lightspeeds.

“… some parts used on the vehicle were actual NASA parts and test equipment from the Apollo spacecraft,” Markus said, “like the turbines on the sides, the guns on top and much more.”

Traction is provided by the SLICK 350/240 15″ and 13″ tires mounted on center-lock style wheels which are made of magnesium.

Would you like to witness this vehicle in action? Check out this video from Hot Wheels. 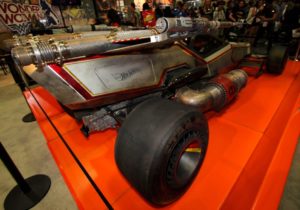 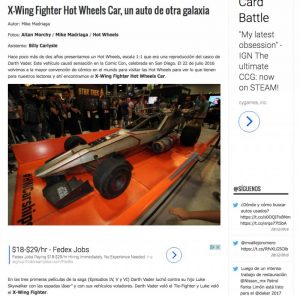