“If it was cold out, the modified caps would leak and freeze my hand; and there goes my can-control.”

On June 23, the Writerz Blok on Market three blocks west of Euclid was reopened as Arts Park @ Chollas Creek.

On July 3, I walked up Chollas Creekside Park, which is on the east side of the venue’s fence facing Euclid and noticed the transformation.

“They took out some walls, added a community garden and a new stage,” said Josh who’s been painting murals here since 2003. “It’s not a better place than what it was [but] more teardown is expected.”

In May of 2017, he and about 30 old-school San Diego graffiti artists rendezvoused here to paint. Josh spray-painted a mural of a Voltron lion lunging forward.

Then in October, the venue suddenly closed shop. 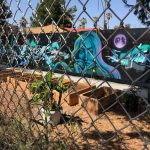 I couldn’t see all of their pieces and the old half-pipe that I once skated.

“After 15 years, the Writerz Blok facility is closing for a redesign of the creative space,” said Reginald Jones, the president and CEO of the Jacobs Center for Neighborhood Innovation, which founded “one of the nation’s first public graffiti art parks.”

“It used to be known as a graffiti arts park and now it’s rebranded as an ‘arts park’ and ‘home to Writerz Blok; when we know that it’s not the same thing,” Josh said. “Some people are already tripping that some of the over-spray might affect the plants.”

There are six wooden planters by the fence I was by, and about 10 feet away there’s covered soil that appeared to be compost. A large mural with a portrait painted by Carly Ealey, one of four female artists that painted that Saturday, overlooks the new green additions. 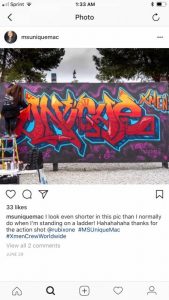 “Writerz Blok’s aesthetic has improved with the added sidewalk that leads to the stage they had built,” she said. “There are rocks that have been laid out all over the ground, as opposed to the wood chips [and dirt] that were there recently.”

Unique painted a mural that her friend helped design. “[It was an] outline that was drawn for me by one of my favorite freight train writers named Vogey, from Colorado,” she said.

Unique started doodling her name in 1994 when she was in middle school. She picked up her first spray paint can in 2011 and mixed it within her artistic repertoire. That Saturday, it took her 10 hours and used about 12 spray paint cans to paint her mural, which is an uber-abstract rendition of her name.

“This particular kind of art comes with harsher criticism and non-acceptance,” said Unique, who is an account analyst by trade and in her late 30s. “Street art and graffiti tend to be categorized differently; there are different rules, graffiti politics, [and] bottom line is — be respectful of other artists.” 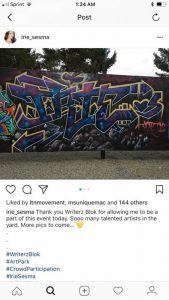 Irie Sesma is a 35-year-old peer support specialist that painted next to Unique. It took her about seven hours to finish her piece with about a dozen cans.

“My design was my name breaking free from a few personal battles I’ve faced over the years, such as depression, self doubt and suicide,” Sesma said, “through the power of my faith in Jesus Christ.”

From my vantage point, I couldn’t see all of their pieces and the old half-pipe that I once skated; I did notice that the aluminum bleachers were now graffiti-free. 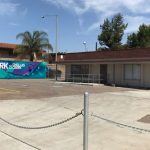 “Some people are already tripping that some of the over-spray might affect the plants.”

Josh works in City Heights as a prevention specialist in the mental and behavioral health field for children, youth and families.

In the past, some kids that committed crimes were brought to Writerz Blok to perform community service hours, and “yes, the kids were provided with an alternative outlet to express themselves and pay their dues, but from what I saw, the root of the problems that some of them have/had were never addressed.

“That’s what I was trying to explain to Sergio before, but now he’s gone.”

In February, Voice of San Diego reported that the Writerz Block opened up their gates to a group of female middle schoolers taking a street-art class at a La Jolla private school.

“And now we are saying it’s OK to do this type of art,” Josh said, “but let’s not forget where it came from: back in the day when we were their ages, we committed crimes to obtain the paint and our actions of spray-painting the walls and billboards were illegal.”

Josh too was a middle schooler when he began to spray paint walls and billboards.

“I grew up in east side (City Heights) in the early 1990s and I had to go through a couple of hoods late at night to get to downtown (before the I-15 was finished). I had a bag of about 10 paint cans which I had to jack, because I couldn’t afford the stuff back then. So I get to the spot and start painting. I’m there trying to hurry it up and not be seen by the police, local gang members, business owners and whoever. And if it was cold out, the modified caps (to spray wider) would leak and freeze my hand; and there goes my can-control. After I’m done, I had to go back home and hope that no one would spot me. Then by the next morning, I hoped that my piece hadn’t been painted over by a rival graff crew.

“Some of these hipster artists that now spray paint,” Josh said, “I respect them, but they will never experience that kinda vulnerability [our genre of] graffiti artists had to face when we went out.”

“We would never have Kung Fu or Jeet Kune Do if Bruce Lee hadn’t shared his culture with Americans,” Sesma said. “Hopefully, they (the girls from La Jolla) can have a deeper understanding of kids who grew up in a different place, and honor the discipline and skill it took for the graffiti culture to get where it is today.”