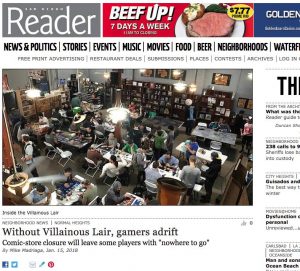 “Deep crushedness is the general feel around here,” said Matt Bantelman. “I’ve gone out of the way to not mention it this evening because everyone’s trying to play [games] and have fun, and then inevitably I make eye contact with another player and ask, ‘Where you gonna play after this?’ and the other person kinda looks down.”

Over the weekend (January 14–15) hundreds of gamers like Bantelman congregated at the Villainous Lair Comics & Gaming store in Normal Heights, paying up to $30 to score the Ixalan cards from the newest Magic the Gathering game set.

On Friday (January 12th) at midnight, “over 70 gamers” lined up for first crack at the new set. But the exhilaration of obtaining the latest creatures, artifacts, sorceries, enchantments, instants, and mana (land) wore off as the gamers spoke about the fate of their local gaming hub.

“A message from the Evil Overlord of the Villainous Lair,” posted Alison Flynn on the store’s Facebook page on January 3rd. “The Villainous Lair will cease typical operations at the end of this month.”

I visited the store during the tournament on Saturday (January 13th), and Flynn was not available for an interview; however, I did find Chris Mitchell, who was managing the tournament for the new set. “I’m sad because Allison and myself helped put this [shop] together — we were the founders of it [six and a half years ago],” he said. “We did everything we could to keep the doors open but finances are what they are and we can’t keep it open anymore.”

Mitchell blames their slow sales on collectors being able to buy the card games at Walmart, Target, and “then Barnes & Noble’s saying, ‘We are doing game night so you guys can do this over here [too]’; and Amazon is opening up stores that cater to this type of stuff, too….

“Freakin’ Walmart is selling [some stuff] at our cost,” Michell explained to me as he gave the tournament winner a bag of goodies. “It’s not just the internet [eBay and Amazon] hurting us, it’s also more competition and the big-box stores are getting in on this stuff.”

Bantelman is a 36-year-old roofer from City Heights. “When I saw the [closing of the store] news on social media,” he said, “I sat down and got emotional because there’s a lot of memories here at their ‘cavern of gaming.’”

Many of the gamers played at the 4700-square-foot facility for hours and some went on weekend binges, continuing the duels at their homes. Caffeine and snack breaks at the nearby Starbucks or Lestat’s was common and a comic-book read in front of the venue “counterspelled” the monotony.

The other gamers I spoke to said that they have “nowhere to go” and feel displaced.

Bantelman says otherwise: “That’s the one upside to the closing of the store, is that we can go out there and explore [just like the game] — it’s like losing your home and having to stay at hotels for awhile, you know?”