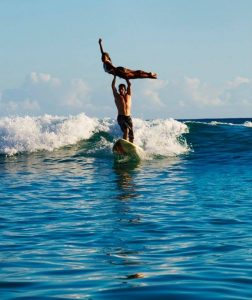 On August 22, Carlsbad residents Brian and Illa McEvilly placed fourth in their tandem surf heat at the Duke’s OceanFest in Waikiki, HI.

“Tandem surfing is performed with two people on one board that catch waves together and often perform various lifts [and poses],” Illa said. “Surfing together is a lot like dancing together, the girl must learn to follow the guy’s lead.”

The couple represents the Windansea Surf Club. They ride Hobie Surfboards shaped by Mark Johnson and the late Terry Martin, that are about 11-12 feet long and 4 inches thick. “If we want to focus on the lifts,” she said, “we will use a wider more stable board, and if we want to surf more we use a narrower board.”

The couple first met in Santa Barbara at an outrigger canoe race in 1995. 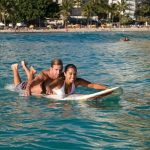 “At the time, Brian attended USD as an undergrad; there he founded the surf team and enjoyed weekends surfing (with shortboards) at Mission Beach jetty, Blacks, and Windansea,” Illa said.

Then the two started surfing tandem, and Brian picked up on longboarding.

(Last week, Brian competed in the Duke’s OceanFest longboard (master’s) competition and made it to the semifinal heat.)

“For the guy, a certain level of fitness is necessary to perform the lifts,” Illa said. “The guy is the captain and responsible for not only maneuvering the board safely in a line up, but also in keeping his partner safe. For the girl: she needs to be comfortable in the water. A partner with a background in dance, yoga, acrobatics, gymnastics, or ice skating will have a headstart in learning the lifts, and some require a certain level of flexibility, but many of the basic lifts almost anyone can do.” 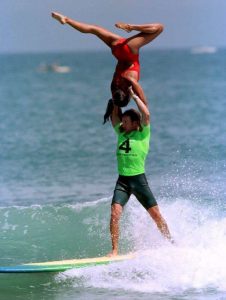 The sport is scored based on the technicality and performances of the lifts where four lifts can be performed on a single run. The more difficult the lift is, the higher points you can score.

The couple is known for the arm to arm, high arch split and high angel lifts, which they have taught to their daughters Hana and Keili.

On Duke’s OceanFest Facebook page, they mentioned that the events on Thursday, Friday and Saturday were canceled and rescheduled, due to Hurricane Lane; then on August 26, the longboard competition ensued and daughter Keili took fourth place in the women’s surf competition.

Back home, Brian and Illa can be seen practicing tandem surfing with their friends at Cardiff, Tourmaline, or Oceanside Harbor. “Many of the historic surf clubs like Windansea Surf Club have teams that keep the [tandem surfing] tradition alive,” Illa said. 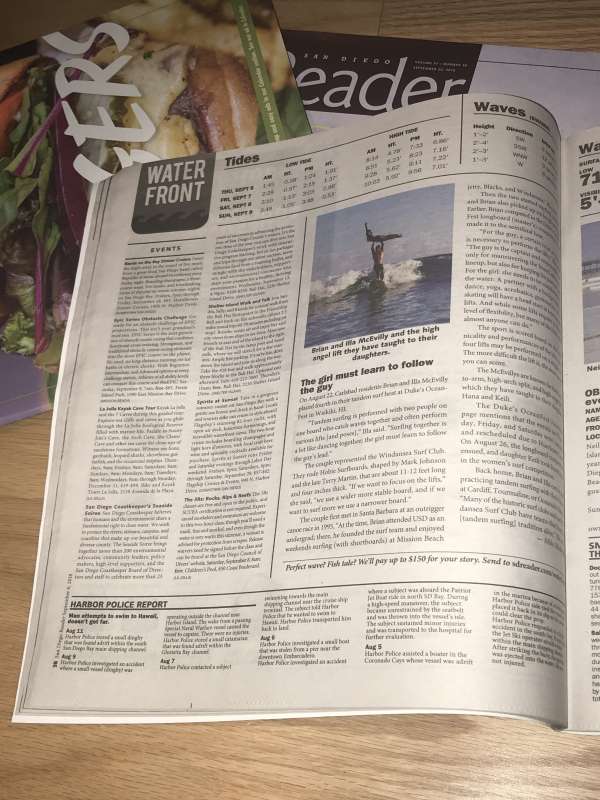 The article was originally published in the San Diego Reader (September 6, 2018) print magazine.