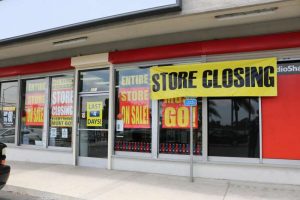 Radio Shack on University Ave. near 805 overpass. “When Incredible Universe closed in 1997, I thought RadioShack was dead already; but they held on for another 20 years.”

“Some of their sales reps and their corporate buyers had a lack of knowledge,” said Bob Mulz, regarding the soon to be closings of the RadioShack stores in his Cherokee Point/City Heights neighborhood.

Mulz, 72, is the owner of Ave Electronics at 3829 University Ave. His electronic-parts store is less than a mile east from RadioShack (3312 University Avenue), which is having a 90%-off blowout sale. There are two more RadioShacks on University Avenue; one in Hillcrest (which will close on May 31 – according to the sales rep), and another one across the Interstate 15 overpass, which is already closed (phones are no longer being answered).

“They took the wrong turn with the telephone stuff,” Mulz said regarding their collaborative effort with Sprint.

“I believe that they are closing due to the competition – Fry’s, eBay, Amazon – where they [and some of their sellers] have a much stronger buying power,” said Lyle Rehberg, 45, “it’s a shame to see such a big player in the electronics ring get tossed out over the top rope.” 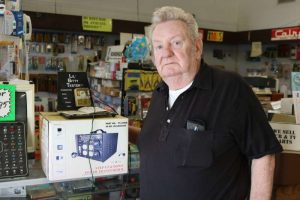 Bob Mulz: “They took the wrong turn with the telephone stuff.”

Rehberg has been installing “monster” audio-visual systems in autos and homes for the last twenty years. He has occasionally used the Realistic and Optimus (RadioShack brands) equipment when he was in a pinch and had to drive to the closest store. “The store isn’t very convenient for installation professionals, everything is overpriced there,” he said, “[and] when Incredible Universe closed in 1997, [which was] Tandy Corporation, also owners of RadioShack, I thought RadioShack was dead already; but they held on for another 20 years.”

Mulz has been supplying people like Rehberg for the last 34 years. His shop still sells capacitors, resistors, wires, installation kits … “and a lot of belts and cartridges (for turntables).”

“With our ‘throwaway society’ – many are reverting back to the tube amplifiers, cassette decks, and turntables,” Mulz said, as he pointed to his stash of record player cartridges with needles and “8000 bands / belts” for the mechanisms that drive the VCRs, boomboxes, 8-track players, walkmans and cassette players. “They (RadioShack) couldn’t keep up with the game,” he said, “right now, they (audio enthusiasts) like this older equipment because the sounds [that come out of the speakers] have more depth.” 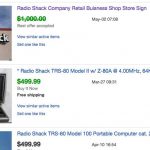 Ray sells much of his stuff on eBay and said that certain vintage RadioShack pieces recently sold for $400 apiece; including a TRS-80 computer, a MK-1 Moog synthesizer, and a Robie Sr. robot.

Mulz was referring to older analog equipment that plays back music (through records, reels and cassettes) and amplifies the music (through tube-amps), unlike the “chintzy sound” that comes from iPods or smartphones where the music has been digitized and compressed, and then “Bluetoothed” to a satellite speaker. Mulz said that he sells new stuff as RadioShack does, like HDMI wires and iPhone connectors, but the profit margin is small because the manufacturers and distributors in China, sell directly to the public online, for pennies above his wholesale price.

Ray, too, goes to Mulz’s store for parts and knowledge. He collects the RadioShack / Realistic brands and is saddened by the bankruptcy of the company, as reported by the Reader in 2015. He has been loyal with the brand since his high-school days in the 1990s. “Realistic wasn’t the best top-shelf stuff,” he said, “but for the price, it did its job.” Now he buys up the vintage equipment that he couldn’t afford back then; including the shaft auto-stereos with the dual knobs, the equalizers with the dancing LED lights, the triaxial 6X9 speakers, and the giant “ghetto blasters that used 16 D batteries.” He sells much of his stuff on eBay and said that certain vintage RadioShack pieces recently sold for $400 apiece; including a TRS-80 computer, a MK-1 Moog synthesizer, and a Robie Sr. robot.

In the 1980s, Mulz got a patent for his Lil’ Bitty Tester that he created with his 27-year electronics-experience in the U.S. Navy. He said that his distributors sold some of his tester units to Tandy Corporation/RadioShack.

As of May 11, Radio Shack by the 805 freeway overpass is dry of merchandise. They still have RCA cables for $1.17 and four-packs of AAA alkaline batteries for $1.80. The store is also selling their five-feet display fixtures for $150 apiece. A store employee said “I have nothing for you” when approached for an interview, he did although provide a “media hotline” number in Texas (the RadioShack headquarters) which was disconnected.

Two employees from the other close-by stores said to customers that the remaining (San Diego) RadioShack stores will close their doors on May 31. 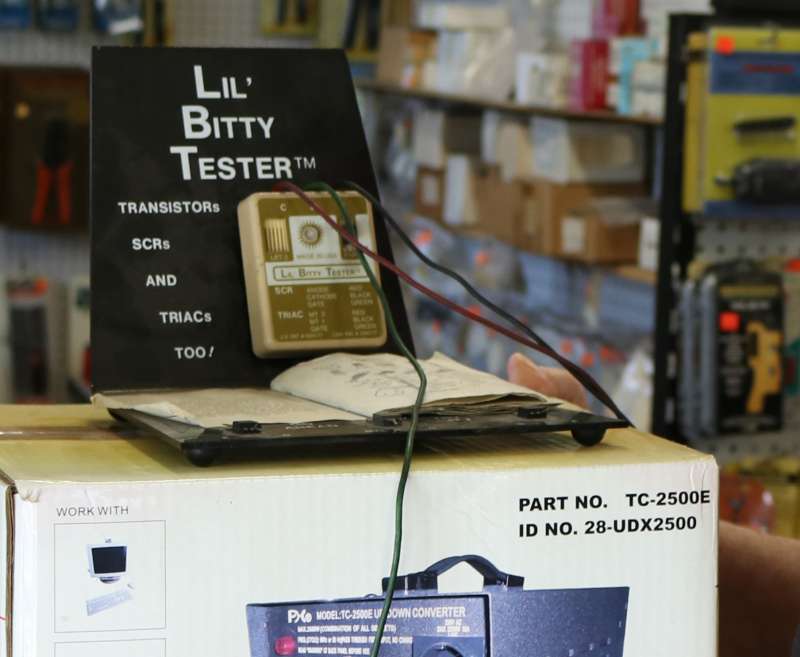 In the 1980s, Mulz got a patent for his Lil’ Bitty Tester that he created with his 27-year electronics-experience in the U.S. Navy.