Johnny and Wilfred were posted up by the side of the house chopping it up about their commonalities both being first-generation Filipino-Americans (naturalized in the 1970s and 1980s). Both lolos (“grandfathers” in Tagalog) were in high spirits as they watched their kids and grandkids prepare Thanksgiving dinner in Clairemont.

“Hey, Russell, can you grab me some pulutan inside so we can drink this old bottle of whiskey right here?” Wilfred lifted up the sealed bottle of 1973 Seagram’s VO Whiskey to ensure there was no sediment. “Looks good from here!” 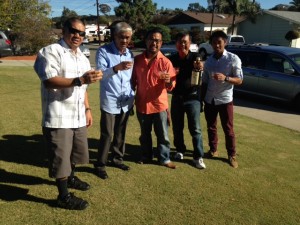 Pulutan is the Filipino word for an appetizer or side-dish devoured with liquor, but not to complement one another’s flavors, as cheese does to wine, but rather to give the drinker more stamina by adding a buffer between the stomach lining and the bloodstream. At this party, lumpias, turkey skin, nachos, Porto’s Rolls, and chicharon bulaklak were the foods chosen to help tame the buzz that was about ready to ensue.

Although this particular bottle of whiskey was aged six years in Canada prior to its bottling in 1973, it neither deteriorates nor ages (better) in taste, according to whiskey websites. Some of the active members on Whisky Magazine and Club Whisky, which have a internet forums on the subject of older whiskey, mentioned that as more oxygen enters the bottle as the whiskey is consumed or oxidized, the likelihood of it not tasting the same increases. They also mention that the bottles have to be stored in upright positions, at approximately 65 degrees, and away from sunlight for the liquor to taste like it did the day it was bottled. 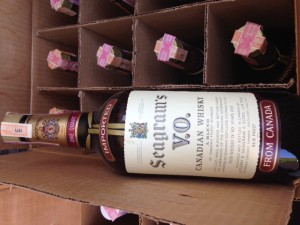 “We are putting these [bottles] to the test,” said Jesus Jimenez, a bartender at a TGIF restaurant. “No sediments, bottle is still factory-sealed, [this] should still be good!”

The cases of old liquor were unveiled at the party by Michael, the brother of the hosts of the party. Michael purchased multiple sealed whiskey and vodka cases from a San Carlos estate sale that also included hundreds of articles of women’s clothing.

“My bro Michael purchased these cases for five dollars each, and each case contains 12 [one-liter] bottles,” Richard laughed as he wiped down the plastic shot glasses. “Then [the person who managed the estate sale] warned us to drink [the bottles] at our own risk and joked about [us] signing a waiver.”

At the time (in 2009), Michael purchased the items for resale via his Etsy and eBay businesses. The clothing sold briskly because of collectible Hawaiian muumuus and hundreds of 1960s mod to 1970s disco stilettos. The sealed whiskey and vodka bottles weren’t sellable because of rules and regulations.

“I bootlegged a couple [of bottles] online for $75 apiece plus shipping, but then the sites got wise to my one-day auctions and restricted my accounts,” recalled Michael. “Then I spoke to the website reps and they both welcomed me to sell my bottles, emptied, or upcyled into goofy-ass ashtrays or shot glasses — eff that, this booze was saved to drink, not looky-loo.”

Uncle Johnny then stepped forward, to pour one (in the grass) for the recently deceased. “I cannot give [the spirits] too much because this stuff is expensive” 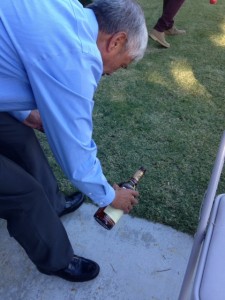 A moderator for an American whiskey website in Los Angeles declined to purchase the bottles from Michael and Richard and stated that the sealed bottles of Seagram’s VO were “too common.”

This whiskey may be common to the aficionados, but certainly not to this group of guys performing the tagay ritual of the Filipinos, where they sit or squat in a circle and take turns drinking from a single glass until the bottled is consumed.

The consensus was unanimous — whether on the rocks, with 7 Up , straight up, or chased, the Seagram’s VO’s appearance, smell, and taste, surpassed the 2014 vintage. The vodka, on the other hand, was stale, but mixed with lemonade, it was drinkable. 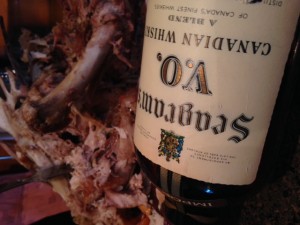