Spin scooters, too good to be true

By Mike Madriaga
On Christmas weekend, I looked for Spin motorized scooters to test drive; I hopped onto the Spin app, and noticed two were closeby at City College. I strolled and jogged around the campus, between the I-5 and Park and north of Broadway, and discovered E-Limes, Birds and Lyft scooters — but no orange and black scooters with the white colored SPIN-text wrapped around its handlebars. I even looked into the San Diego High School football field, which sits north of the campus, and no orange scooters were in plain sight.

On the app, there’s a bubble on the GPS map which I presumed indicates a scooter is within a 1-2 block vicinity. (I messaged the company directly, but as of press time, I didn’t receive a response.)

I then tried to find some in Little Italy and Gaslamp and couldn’t find any Spins. By Broadway, I saw a charger wearing a hoodie who was unloading scooters from a large white van, and at a glance, none were from Spin. I’ve heard of chargers that charge multiple brands, and just maybe: he had Spins in his van.

“Hey, bro, can I talk to you real quick,” I yelled over the street noise, “I’m a reporter for the San Diego Reader and trying to find a …. ”

He glanced over, nodded, mashed his accelerator, and spun his wheels before I could mention the word “spin.”

I then shut off the Spin app, did a Google search, and found the Ride Into Cash YouTube and Facebook pages. They are scooter-charging fan pages ran by Andrew S., a North Park-based scooter charger. I wrote about Andrew last year when he charged 71 Bird scooters in one night, and made $445.58. This year, he started working for Spin when they first moved into San Diego in March.

(I reached out to Andrew via text, but he responded after I wrapped up this 2020 New Years Eve scooter-story.)

“Overall, Spin fired all of its scooter chargers in San Diego California [and] it happened December 16,” he said on a video posted days before Christmas.

“And all of a sudden I no longer work for Spin. The company Spin, which is Skinny Labs Inc., decided to change their business model and remove charger employees, and switch directly to operations employees only, where they don’t have people like myself go to pick up 30-40 scooters take ’em home, and charge them — it’s just the operations’ employees working with the warehouse.” 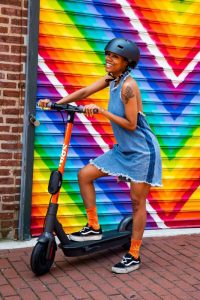 When I reached out to the dockless-scooter company based out of San Francisco, that was reportedly purchased by Ford, I noticed on their page, that they were no longer offering jobs in the San Diego area. The closest location for a job was in Long Beach as a scooter charger as Andrew before Christmas.

“Chargers are key to making sure that all Spin users have access to scooters,” says the scooter’s website. “The duty of chargers is to pick up scooters at night with their own vehicles, charge them at home, and then deploy them in the early morning hours. You will be required to pick up, charge, and deploy a minimum amount of scooters every night, and drive a large capacity vehicle (truck, SUV, van) that can carry at least 20 scooters safely without damaging them.

“Pay is hourly, and there is a maximum shift length per night, as well as a maximum number of shifts you can take per week. Mileage, electricity, and cell phone reimbursement available. Bonus pay available based on performance.”

This business model is different from the other scooter charger gigs I have covered in the past, where chargers are/were subcontracted.

“I basically worked about a year,” Andrew continued on his video, “maybe a little less than a year [and] not full time, and made over $25,000; 11 of that came from Spin actually in the 9 months I worked there.”

On Andrew’s Spin scooter-loading and charging-videos — that were made around the Gaslamp district during the summer — he’s wearing a neon orange safety vest and seen loading 40 scooters into the bed of his GMC Sierra truck that’s protected by self-adhesive rubber safety mat. He says he has loaded up to 60 Spin scooters in his bed, where he would leave them while they were charging in his driveway.

So recently, “that change came fairly sudden,” he said, “… I got an email asking me to call in on this phone conference, that morning I checked my bank balance and I was apparently paid (a couple of days earlier), which is clearly an indication that they are basically letting people go.

“Ten days before Christmas being terminated, that was a little rough. I knew that from day one, that working for this company was not going to last. Being an employee, getting paid like $18 an hour, and receiving $4 as a bonus per scooter above 20 each night — that model didn’t make sense.

“The reality is: when you join these companies and it sounds like its too good to be true, it’s because it is, but it doesn’t mean you cannot milk it while you can.”