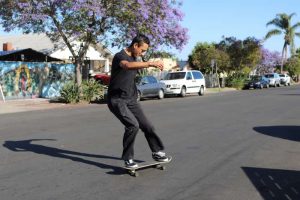 Jonathan Santoyo: “Sometimes I feel like I’m going faster than the cars at 20 miles per hour.”

Last Thursday (May 18), Jonathan Santoyo power-slid his skateboard with much more finesse — “thanks to the city of San Diego.”

“It was harder for sure before they paved this street,” he said. Santoyo is a 24-year-old City College student. He has been skateboarding in the neighborhood for the last 12 years.

Earlier this year a section of four streets (Cherokee Avenue, 37th, 38th and 39th streets) north and south of University Avenue were treated with a slurry seal.

“Slurry Seal is a pavement preservation method consisting of an asphalt emulsion, sand, and rock which is applied to the street surface at an average thickness of ¼ inch,” says the city website. “This cost-effective maintenance treatment extends the life of streets already in good condition. Slurry seal provides a durable riding surface and addresses any existing surface distresses on streets in generally good condition.”

Santoyo practiced his favorite skate tricks by the Flor Tire Shop; he busted the ollie frontside 360 and frontside powerslide. “37th is the fastest [street] but 38th has a nice hill,” he said, “sometimes I feel like I’m going faster than the cars at 20 miles per hour.” 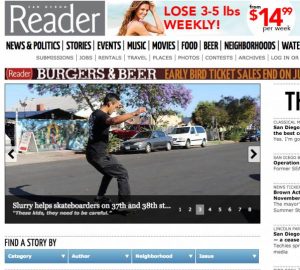 “These kids, they need to be careful,” Michael said. He lives by the Whitman and 38th street intersection, which is close to the new skatepark that is being built (south of Cherokee Point Elementary School by the old YMCA).

Michael said that many of his neighbors are concerned about the increasing amount of kids (and adults) skating down the newly surfaced streets. “They are hard to see while driving and especially when they get [aerodynamically] low,” he said.

Noelia Mendez agreed with Michael’s assessment of skaters “bombing-down” the jet-black slurry-sealed streets, “especially when they are on vacation,” she said. Many of the neighborhood skateboarders stop by her store, Noelia’s Market (on University Avenue and 37th Street), for their sodas and snacks.

“If there are cracks (on the street),” said Michael Prekas, 24, “and you powerslide into one, you’d eat it.” Prekas skates the Cherokee Point area as well, when the Central Avenue Mini Park skatepark across the Interstate 15 overpass is too crowded. He wishes that the city would fix his favorite incline on B Street by City College.

Residents have the option to log on to the city website and request that their streets be sealed or the asphalt resurfaced.

During the “two-to-three day” slurry-street application process in Cherokee Point, many patrons of the businesses on University Avenue (between Cherokee Avenue and 39th Street) had “no place to park.” This was due to residents of the temporary-closed off streets parking in front of all of the businesses on the main avenue.

“We were very slow (business-wise) at that time,” Mendez said.

Published in the San Diego Reader on February 15, 2018