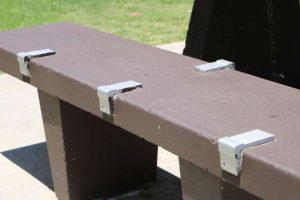 Skateboard Prevention Devices for Stone sell for between $17 and $21.

“The city is hiring people that don’t know what is skateable and what is not skateable,” said Brian Kelly, “and what needs to be knobbed and what doesn’t — or the city is just telling these guys to knob everything.”

On July 12, Kelly saw a peculiar bench and table located at the Montclair Park (at the end of Quince Street in North Park). The cement picnic table and benches rest in the middle of the grass by the park entrance. One of the eight-foot-benches had four metal skate deterrents affixed on its edges; the opposite bench had none.

Kelly is the manager of Overload, a North Park skate and gear shop on 30th Street. He’s been skating citywide since 1991; which is about the same time the city took notice of the new skate-style that emerged. “[It was] when us skaters started jumping on ledges and grinding on the edges — it was like the early 1990s.”

Kelly said that shortly after he started skating, the city and businesses started adding skate deterrents on handrails, curbs, and park benches and tables.

“It’s impossible to jump (with the skateboard) that far, and I’d rather see someone skate [down] this hill,” said one kid passing through the park.

The bench has no cement pathway that leads to it and the sidewalk is about 20 feet away. 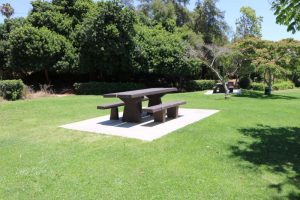 “You can’t ollie onto the benches nor the table.”

“Oh you mean those skate stops, it’s kinda funny because you cannot really get any speed to do anything and you can’t ollie [onto the benches nor the table],” said Jake Anzarouth. This day he was landscaping the garden at the house next door to the park bench in question.

“I think the city also did it for the homeless,” Anzarouth said, “there’s a homeless population down in the canyon (adjacent to the park) and they made it as uncomfortable as possible (to sleep on). It’s like the rocks underneath the 5 Freeway.”

Anzarouth, 37, has been skating for a while now too, but as a green-friendly transportation alternative.

“Therein lays the problem of wasting taxpayer money on something that can go towards affordable housing, but what the city is doing is saying ‘any bench needs a skate stop because kids are gonna skate it, or public bus stop benches need to have a certain deterrent, so people cannot sleep on them.’ It seems like chump change with these skate stops, and if you add it all up, and the application via the employment of the city workers and their pension funds. All that [money] heaped together; maybe you can come up with some other viable solutions.”

Kelly then added, “I notice it (skate deterrents) everywhere in San Diego, all kinds of spots with little tiny curves … and going towards El Cajon Boulevard there’s a church on Illinois [Street] and it’s like knobbed all the way around and nobody even skates there.”

Edemco, a manufacturer and distributor of signs, sells a similar product that both Kelly and Anzarouth are questioning. They call them Skateboard Prevention Devices for Stone and sell them for between $17 and $21 apiece, depending on the quantity ordered.

“Recently I’ve seen in Imperial Beach that they made all of these decorative ones,” Kelly said, “so it looks like it’s a f@#king star shell or it’s like an octopus, and it’s the same thing and those gotta cost even more.”