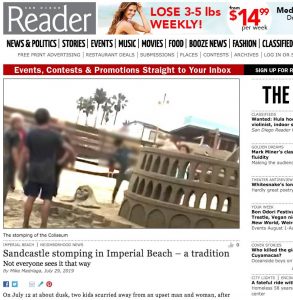 The original story was featured in the print edition of San Diego Reader on August 8, 2019

On July 12 at about dusk, two kids scurried away from an upset man and woman, after the kids demolished parts of a sandcastle sculpture by the Imperial Beach Pier.

IB-local Joey Bradley was coming up on the other side of the pier when he noticed his daughter’s surf-buddies getting the stink-eye from the adults.

“All the kids tear down the sand castles at the end of competition, every year,” Bradley said on July 27. “It has been going on since …. in the 80s which I had partaken in myself, as a kid.”

Earlier in the day while Bradley and his daughter surfed the three-four footers with the local groms (young boys and girls), the Sun & Sea Festival 2019 sandcastle building competition, begun circa 1960 was going on at the IB beach.

The next day, a Facebook video surfaced titled “Boys will be boys?” of the kids stomping out parts of the sand sculpture. The creation stood about four feet tall and resembled the Roman Coliseum; at the base was a face sculpture that was smashed. The video became viral with 337 comments before the page administrator shut it down and commented: “For every angry comment there’s one celebrating the kids. This is obviously a torn issue but I feel like it’s reached its logical conclusion. Thanks for the healthy discussion!” 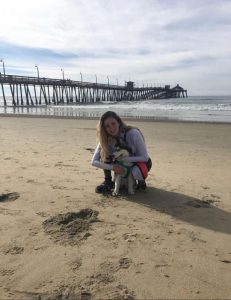 Marisol: “Those parents need to apprehend their kids.”

“I’m watching it again,” said an IB woman, “Parents …. if this is OK, why are the children running like they did something wrong? The video shows the kids running, they know right from wrong.”

Others on the thread called the kids “jerks, asshats, little punks” and condemned the kids’ parents for not stepping in.

Mayra, another mother from IB said: “Let the kids have fun …. smh [shaking my head].”

“This is so upsetting,” said IB resident Marisol Castillo. “Those parents need to apprehend their kids. This is not what IB stands for.”

Shortly after, one of the kids’ mothers keyed in to the discussion.

“The kids are running because the psych adults are threatening them,” she said. “That’s my kid, and you’re out of line.”

I reached out to the mother but as of presstime, she didn’t respond.

“[She] is ok,” Bradley said, “although, she probably won’t respond, but she does a lot for the kids in town.

“The boys were school friends of my daughter. They are all good beach kids and they spend all their free time surfing, skateboarding, playing water polo, and doing other productive activities around town. All the adults on the video were being a bit dramatic; as well as the naysayers from the Facebook thread.”

The thread went on for days before it was shut down; the naysayers argued that destroying the sandcastles is disrespectful and may lead to bigger crimes like vandalism and graffiti. Those OK with the kids destroying sandcastles said that it’s an old IB tradition and it shall continue.

Castillo, who commented earlier about the “parents need to apprehend their kids,” was one of the only posters on the thread that had a change of heart. “Well dang,” she said, “I apologize! I honestly thought they’re just being rude, but after reading the [thread] and learning about the tradition, I’ll definitely join them next year! [happy face emoji]” 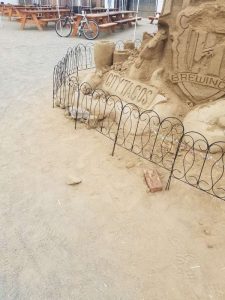 “This person (or people) threw bricks at the Mike Hess Brewing sculpture that was created before the 4th of July.”

A woman that lived in IB for 40 years then stepped into the discussion. “My father was one of the original organizers of this event and my brother …. competed for many years with our local [sandcastle building] team: IB Posse. All of our kids enjoyed the tradition of jumping on the castles not long after the winners were announced. Those of you calling children asshats or other names are the ones who should be ashamed of yourselves.”

Four days prior to the competition and controversial sandcastle attack, the IB Posse posted a photo on Facebook of their recently built sand sculpture that was fenced off and vandalized. They captioned it in part: “Either someone doesn’t appreciate our work or doesn’t care for business in our town. This person (or people) threw bricks at the Mike Hess Brewing sculpture that was created before the 4th of July. It’s unfortunate that we have to consider this kind of behavior before we do something nice.”